Ten candidates will face off in the fifth Democratic primary debate in Atlanta on Nov. 20, the Democratic National Committee announced Thursday.

The MSNBC/Washington Post co-hosted debate is being held from 9 p.m. to 11 p.m. at Tyler Perry Studios, and will feature the following candidates, in alphabetical order:

Candidates had until Wednesday at 11:59 p.m. to qualify, and the DNC has upped the ante for this debate, requiring candidates to secure both 165,000 individual donors and either four polls from a DNC-approved list of sponsors with at least 3% support or two polls from any of the early voting states — Iowa, New Hampshire, Nevada and South Carolina — with at least 5% support. 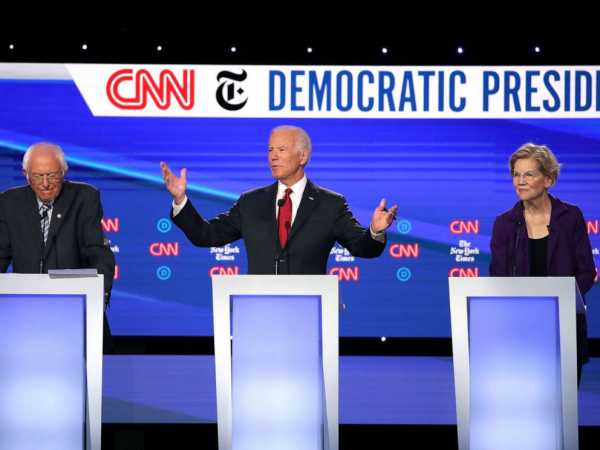 Of the candidates who had declared before the deadline passed, only former Housing and Urban Development Secretary Julián Castro had met the donor threshold, according to his campaign, but he failed to secure any qualifying polls, based on an ABC News analysis. This will be the first debate of the campaign that Castro won’t participate in. On Oct. 21, Castro made a fundraising plea to his supporters, saying he needed to raise $800,000 by the end of the month in order to stay in the campaign. While his campaign said he met that goal, raising a total of $1 million in October, days later his campaign laid off all staff in New Hampshire and South Carolina.

National press secretary Sawyer Hackett told ABC News that the teams in those states are «very small compared to others,» and that the campaign would now be focusing on Iowa, Nevada and Texas.

In recent days, Castro has started criticizing the order of the Democratic primary and caucus calendar, specifically that Iowa and New Hampshire always get to vote first, positions both states take immense pride in.

«I don’t believe that forever we should be married to Iowa and New Hampshire going first, and that’s the truth of the way I see it,» Castro said Monday, while campaigning in first-in-the-nation Iowa.

He said Iowa’s population doesn’t reflect the rest of the U.S. population or the Democratic Party, and claimed that Iowans on Twitter agreed with him that «other states actually deserve a chance to go first.»

In addition to Castro, the following candidates won’t be on stage for the next debate, in alphabetical order:

None of these candidates’ campaigns announced they had reached the donor threshold, and none of them secured any qualifying polls, according to an ABC News analysis. Bennet, Bullock, Delaney and Williamson all didn’t qualify for the third and fourth debates. Sestak hasn’t qualified for any of the debates. Having only announced his candidacy Thursday, former Massachusetts Gov. Deval Patrick wasn’t in the running to potentially find himself among the candidates who’ve been campaigning for months now. He faces an uphill battle to garner support quickly if he wants to join them on stage for the Dec. 20 debate, which is being held at Loyola Marymount University in Los Angeles.

The thresholds that candidates have to meet to qualify are even higher than they were for November’s debate. Candidates must have at least 200,000 unique donors, and a minimum of 800 individual donors per state in at least 20 states. Additionally, they must get at least 4% support in four national polls or polls out of Iowa, New Hampshire, Nevada and/or South Carolina that are conducted by a sponsor on a list determined by the DNC, or get at least 6% support in two early state polls. While the two early state polls at 6% support can be conducted in the same state and by the same organization, for the four polls at 4% support to count, the polls must be sponsored by different organizations or if sponsored by the same organization, must represent a different geographical region.

According to an ABC News analysis, only six candidates have qualified for that debate so far: Biden, Buttigieg, Harris, Klobuchar, Sanders and Warren.

Former New York City Mayor Michael Bloomberg, who is flirting with entering the primary himself, and actually filing to have his name on the ballots in Super Tuesday voting states, said Tuesday, after filing to appear on the ballot in Arkansas, «I’m going to finance a campaign if there is one with my own money so I don’t owe anybody anything.»

With that strategy, and if the DNC keeps requiring a level of grassroots fundraising to qualify for the debates, the billionaire likely won’t ever participate in one.