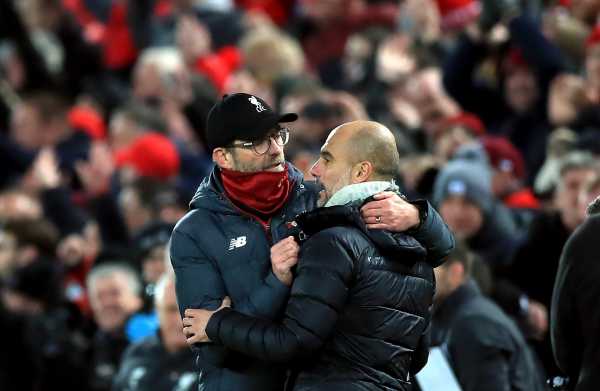 Liverpool’s thrilling 3-1 win against Manchester City lifted them eight points clear at the top of the Premier League.

City’s third league defeat of the season leaves them nine points behind in fourth place, while Leicester registered their fourth straight league win on Saturday to climb second with victory over Arsenal.

Chelsea also maintained their top-four challenge by extending their winning run to six, while Manchester United are up to seventh after Sunday’s home win against Brighton.

Here, the PA news agency looks at five things we learned from this weekend’s action.

Is this Liverpool’s defining moment?

Liverpool took a mighty step towards the Premier League title. It is only November and only 12 games have been played, but they moved nine points clear of Manchester City after dismantling the reigning champions 3-1 at Anfield and few will be betting against Jurgen Klopp’s side going on to end their 30-year wait for the domestic crown. Liverpool let slip a big lead over City last season, but it appears inconceivable they could do so again this time around. They have dropped only two points this season, while their last league defeat was against Pep Guardiola’s side in January.

VAR took centre stage again in the biggest game of the season so far. Liverpool’s thrilling win was marred by more uncertainty as it upheld referee Michael Oliver’s decision not to award City a penalty when the ball appeared to hit Trent Alexander-Arnold’s hand moments before Fabinho crashed home the opening goal from 25 yards. Oliver opted not to consult the pitch-side monitor and there were plenty watching who felt if he had, he would have ruled out the goal and awarded Pep Guardiola’s side a penalty.

Leicester boss Brendan Rodgers played down talk of his side’s title challenge after they had out-played Arsenal, with goals from Jamie Vardy – his 11th league goal of the season – and James Maddison lifting them up to second, above Chelsea on goal difference. Rodgers insisted his sole focus was on the Foxes’ performance levels, but if these can be maintained there is no doubt title favourites Liverpool will be looking over their shoulders. The 2016 champions heaped more pressure on under-fire Gunners boss Unai Emery, whose side’s winless Premier League run stretched to four matches.

Sheffield United showed they can mix it with the Premier League’s big guns with another impressive display in their 1-1 draw at Tottenham. Blades boss Chris Wilder said after George Baldock had cancelled out Son Heung-Min’s second-half opener that his side had been ridiculed at the start of the season after winning promotion back to the top flight for the first time since 2007. But they have drawn at both Chelsea and Tottenham, have beaten Arsenal and won at Everton. They sit fifth in the table, above Arsenal and Manchester United, and no-one is laughing at them now.

United’s comfortable 3-1 win against Brighton helped maintain the air of optimism that has descended on Old Trafford in recent weeks. Ole Gunnar Solskjaer’s side could have won by a much bigger margin, but the performances of Fred, Marcus Rashford and teenage defender Brandon Williams, on his full Premier League debut, will have kept United’s fans in good heart. Their side have won five of their last six games in all competitions and have moved up to seventh, their highest position in two months, while the only negative was the injury sustained by midfielder Scott McTominay.