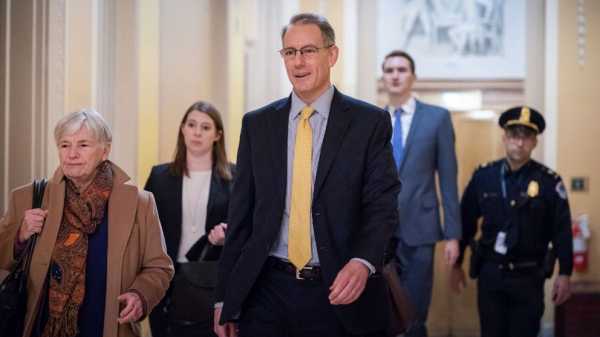 The first Office of Management and Budget official to break ranks amid the House’s impeachment inquiry into President Donald Trump arrived Saturday for his closed-door testimony.

Acting White House budget chief Russ Vought, along with Michael Duffey, an official with oversight over national security spending, have both refused to comply with congressional subpoenas to testify in the impeachment inquiry. And the agency has spurned repeated demands and subpoenas from House Democrats seeking documents and records relevant to their probe into whether the Trump administration inappropriately withheld foreign aid to Ukraine to pressure the country to launch investigations that could benefit the president’s reelection bid.

Sandy, who signed off on the initial withholding of the aid, was later replaced in the process by Duffey, according to a person familiar with the matter.

Investigators, who have questioned senior Pentagon and State Department officials in their inquiry, hope Sandy will be able to shed new light the circumstances surrounding the withholding of military aid to Ukraine over the summer, and how the aid was eventually released on Sept. 11.

(MORE: What you need to know about the Trump impeachment hearings: A quid pro quo and Trump’s defense Mark Sandy, a career employee in the White House Office of Management and Budget, arrives at the Capitol to testify in the House Democrats’ impeachment inquiry.

Amb. William Taylor, the top U.S. diplomat in Ukraine who testified before the House Intelligence Committee on Wednesday, told lawmakers that he first learned of the hold in July, after Congress had previously approved nearly $400 million in military aid to Ukraine from various Defense and State Department initiatives that had been publicly announced.

«I and others sat in astonishment. The Ukrainians were fighting Russians and counted on not only the training and weapons but also the assurance of U.S. support,» he recounted, adding that the money was frozen by acting chief of staff Mick Mulvaney, at the president’s request. «In an instant, I realized that one of the key pillars of our strong support for Ukraine was threatened.»

Catherine Croft, who as a special adviser on Ukraine at the State Department, recently testified that her foreign counterparts raised concerns about a hold on military aid «very early on,» according to a transcript of her deposition released by Democrats.

Laura Cooper, a senior Pentagon official who recently testified on Capitol Hill, said that aides were confused by the hold on the financial aid because the Defense Department had certified the financial transfer in May when Ukraine had met the necessary anti-corruption benchmarks. Senior aides also questioned the legality of the hold on money approved by the House and Senate, she said.

Trump and White House officials have defended the withholding of aid over the summer, arguing that it was done to pressure European nations to contribute more security aid to Ukraine, and because of concerns about corruption. Republicans have also argued that the hold the aid was eventually lifted before the end of the last fiscal year on Sept. 30, ensuring that Ukraine would receive the assistance. 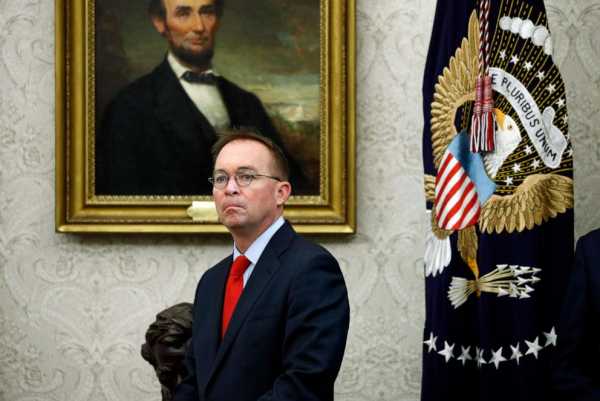 In a White House press conference in October, Mulvaney also said the aid was withheld to pressure Ukraine to investigate unsubstantiated theories about Ukrainian interference in the 2016 election. Trump’s efforts to pressure Ukraine to investigate the 2016 election and Biden family is at the center of the House impeachment prove.

«The look back to what happened in 2016 certainly was part of the thing that he was worried about in corruption with that nation,» Mulvaney said. «And that is absolutely appropriate.»

Democrats have suggested that the aid was released once they began investigating the matter.

(MORE: Impeachment hearings: A look at who’s scheduled to appear next week)

In Wednesday’s open hearing with George Kent, a senior State Department official, and Amb. Taylor, Illinois Rep. Raja Krishnamoorthi, a member of the House Intelligence Committee, noted that the hold on the aid was lifted two days after House Democrats announced their investigation on Sept. 9.

«You don’t really get points when you get your hand caught in the cookie jar and someone says, ‘Hey, he’s got his hand in the cookie jar’ and then you take your hand out,» Rep. Eric Swalwell, D-California, said Friday during the open hearing with Marie Yovanovitch, the former US ambassador to Ukraine.