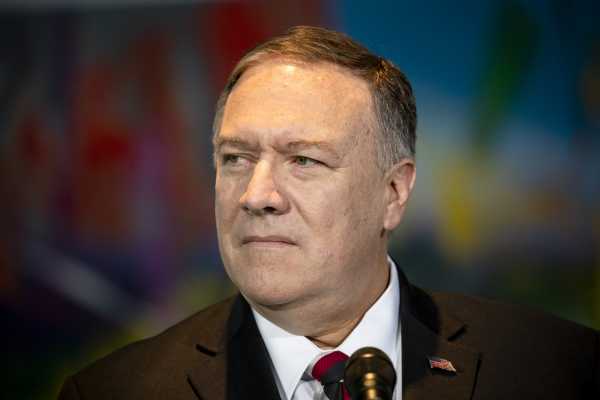 The documents — obtained through a Freedom of Information Act request — lay out Giuliani’s efforts to establish direct contact with Pompeo. They also seem to support the public testimony of US Ambassador to the EU Gordon Sondland, who told lawmakers Wednesday “everyone was in the loop” when it came to Trump’s campaign to pressure Ukraine into investigating the Biden family.

The nearly 100 pages of new documents could point to the beginning of that involvement for Pompeo, who has worked to distance himself from the pressure campaign.

“Hate to bother you but might you be able to send me a good number for above, I’ve been trying and getting nowhere through regular channels,” Zafonte wrote.

Westerhout reached out to the State Department on behalf of Giuliani’s team, and got Pompeo’s contact information. The two men spoke on March 29; the documents also suggest they spoke before Zafonte’s email, on March 26 — though it’s not clear why Giuliani’s assistant then reached out to find a way to connect the two men.

Giuliani has said he gave Pompeo a dossier with complaints about former US Ambassador to the Ukraine Marie Yovanovitch in between those two calls, on March 28. Yovanovitch was dismissed from her post shortly after; Trump has said he fired her because she was “not an angel,” because she wouldn’t hang his picture in the US embassy in Ukraine, and because he was told she didn’t like him. Yovanovitch has testified she believes she was fired because her anti-corruption work interfered with the business plans of Giuliani and his associates.

Pompeo has faced questions about his seeming inability to protect Yovanovitch, a lauded career diplomat, from Trump’s wrath, particularly given his good relationship with the president. And he faces growing questions about the role he played in the campaign to pressure Ukraine to investigate Trump’s political opponents.

It is not clear what Giuliani and Pompeo discussed on their encounters, one of which was blocked for a 20-minute interval on Pompeo’s schedule, or whether the lawyer brought up Yovanovitch during those conversations. But is clear they took place around the time Giuliani first began publicly demeaning the former ambassador, and around the time he began promoting the conspiracy theory that former Vice President Joe Biden improperly used the powers of his office to help his son in his business dealings in Ukraine.

Pompeo is emerging as a key figure in the Ukraine scandal

These March conversations seem to have paved the way to a key role for Giuliani in official US-Ukraine policy. Sondland’s testimony suggested that over time, Pompeo began to direct his officials with concerns about US-Ukraine relations to speak not with him, but with Trump’s personal lawyer.

“Even as late as September 24, Secretary Pompeo was directing [former US special representative to Ukraine] Kurt Volker to speak with Rudy Giuliani,” Sondland told lawmakers Wednesday. “In a WhatsApp message, Kurt Volker told me in part: ‘Spoke w Rudy per guidance from S.’” (S is shorthand among State Department officials for the secretary of state.)

All of this suggests Pompeo was made aware of Giuliani’s agenda in Ukraine from the lawyer himself, and that he knew and understood how key Giuliani was to the president’s desires for the investigations. Sondland’s testimony already made it difficult for the secretary of state to claim he didn’t know about the pressure campaign or the efforts to oust Yovanovitch. The documents obtained by American Oversight make this even more difficult for Pompeo to do.

As Vox’s Matt Yglesias has noted, there are increasing calls for Pompeo (and other top officials with direct knowledge of Trump’s asks of Ukraine) to testify before Congress. Given that officials like acting chief of staff Mick Mulvaney have already ignored congressional subpoenas for testimony, it is unlikely Pompeo would appear if called. But that does not mean the Democratic lawmakers leading the impeachment inquiry won’t try — especially as his failure to appear could further bolster an article of impeachment about obstruction.

And they could try to compel Pompeo’s testimony by holding him in inherent contempt should he fail to show after being subpoenaed. This would involve levying fines — or, in its most extreme form, arresting the secretary. As Yglesias has written, lawmakers could also take the more measured step of refusing to cooperate with Trump on legislation he desperately wants passed, like his USMCA North American trade agreement, to try to force his top officials to cooperate.

House lawmakers, have however, signaled that they do not want to engage in drawn out battles for testimony, but that they hope to end their inquiry sooner rather than later. It could well be that they let Pompeo go without asking him to testify, making their decisions on impeachment based on the testimony they have so far. But even if this is what happens, Pompeo will continue to face questions about his involvement in the pressure scheme, particularly if he does indeed embark on a run for the US Senate, something he has signaled he’s seriously considering.