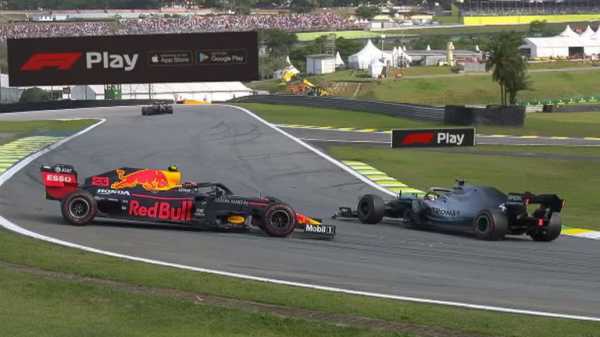 Lewis Hamilton hits Alexander Albon, taking him out of the Brazilian GP allowing Pierre Gasly through to finish 2nd at the Interlagos circuit.

Max Verstappen won an epic Brazilian GP ahead of Pierre Gasly after a dramatic end to the race saw collisions between Lewis Hamilton and Alex Albon, and Ferrari’s Charles Leclerc and Sebastian Vettel.

Hamilton finished third but a five-second penalty for crashing into Albon drops him down to seventh, with McLaren’s Carlos Sainz moving into the top three for McLaren after starting at the back of the grid.

Hamilton and Albon were battling for second following a late Safety Car, which was caused by the two Ferraris coming together.

«I massively apologise to Albon,» said Hamilton. «Completely my fault.» 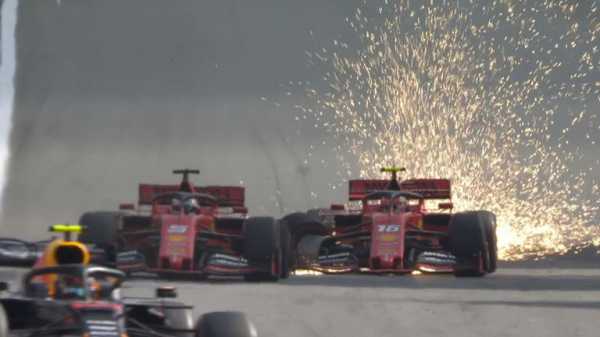 The Interlagos race was an F1 classic which included enthralling wheel-to-wheel battles between Verstappen and Hamilton, a near pit-lane disaster for Red Bull, and ended with shunts and utter chaos.

The main beneficiary of that finish was Gasly, previously axed by Red Bull, who celebrated his first F1 podium with a brilliant second place for Toro Rosso, their best result since Vettel’s Monza victory in 2008.

Sainz also has a first top-three finish, giving McLaren their first podium since 2014.

The day belonged to Verstappen, who was superb throughout, but Brazil provided so many more talking points and heroes.

Two crashes, a sprint to the line, and a Max win: Brazil’s crazy climax
With Verstappen and Hamilton well ahead of the field with 20 laps remaining, the Brazilian GP was set up for another ding-dong battle between the pair for the race victory. But then Valtteri Bottas’ engine failure — Mercedes’ first reliability DNF of the season — led to a Safety Car and a big decision for Mercedes and Red Bull.

Verstappen pitted, Hamilton did not — which meant the Dutchman would have fresh tyres to attack the new six-time champion. He passed him at his first opportunity following the restart, retaking the lead.

But that Safety Car also closed up the chasing pack, and after Albon went around the outside of Vettel for third — at the same time as Verstappen’s move — the Ferraris were in direct competition for fourth.

And on Lap 66, Leclerc and Vettel collided.

Leclerc, on fresh soft tyres, overtook Vettel into Turn One but as the four-time champion looked to come back following the Senna Esses, he edged to the left while alongside Leclerc and the two red cars touched. The contact was minimal, but it resulted in punctures to both cars — ending their races.

Both drivers were apoplectic on team radio. 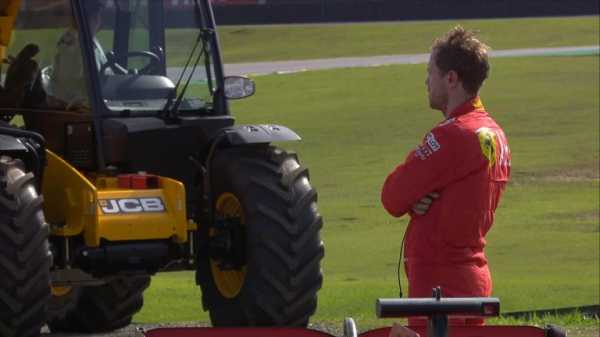 1:35 Charles Leclerc and Sebastian Vettel explain their view after both Ferrari team-mates collided in the Brazilian GP.

That crash meant another Safety Car was forthcoming and this time Mercedes opted to pit Hamilton — a risky call considering he then dropped back to fourth, with so few laps remaining. In the end, Hamilton would have two clear laps to attack the three drivers in front of him: Gasly, Albon and race leader Verstappen.

Hamilton immediately dispatched midfield front-runner Gasly and was then all over the back of Albon in the Red Bull, who appeared to give space down the inside at Turn 10. Hamilton dived up that gap, but when Albon then turned into the corner a shunt was inevitable. Hamilton took the blame.

Albon spun out of the race, Hamilton sustained damage to his front wing, while Gasly took advantage of the crash to move into an unlikely second. 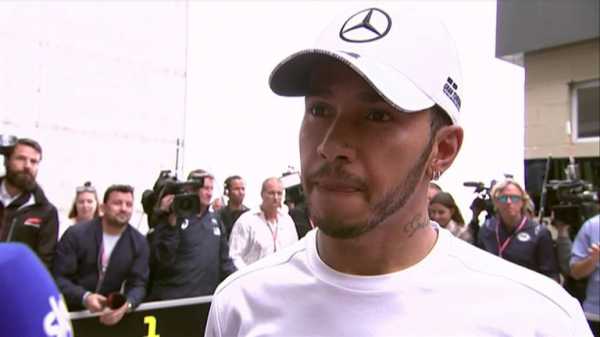 1:40 Mercedes’ Lewis Hamilton explains pitting before the second restart and apologises for hitting Alexander Albon, after a crazy race in the Brazilian GP.

The drama wasn’t done there as Hamilton came back at Gasly in his injured Mercedes — but the Toro Rosso just held on, crossing the line just six-hundredths of a second ahead of Hamilton.

Cue one of the most emotional team radios of the season after a Honda-powered one-two.

Sainz also made the most of the Safety Cars to leapfrog the rest of the midfield, crossing the line in fourth but finishing in the top three — although, cruelly after such a strong comeback drive, he didn’t get to stand on the podium.

Verstappen, meanwhile, took his third race win of 2019. A Verstappen victory never seems to be drama-free, nor does the Brazilian GP.

Hamilton vs Verstappen
Even before those Safety Cars, the race was filled with action. And the two main protagonists were Verstappen and Hamilton.

Verstappen led the field safely away from pole while Hamilton overtook Vettel into Turn One. But despite that successful move, Verstappen quickly built a 2s buffer to the Mercedes, highlighting Red Bull’s pace.

Hamilton urged his Mercedes team to try something and on Lap 21, they brought him in for his first stop in an attempt to undercut Verstappen, while also essentially forcing Red Bull to follow them onto a two-stop strategy.

Red Bull responded immediately by bringing in Verstappen but their hopes of retaining the race lead were spoiled by Williams, who dangerously released Robert Kubica into the Red Bull’s path in the pit-lane — with Verstappen having to take evasive action to avoid a collision.

Williams were punished with a 5s penalty, while Hamilton now had the lead. But it wasn’t for long. On his first lap out of the pits, Verstappen rushed up behind the Mercedes and overtook him into Turn One.

That pass would be crucial as he remained ahead of Hamilton before the chaos ensued later in the race.