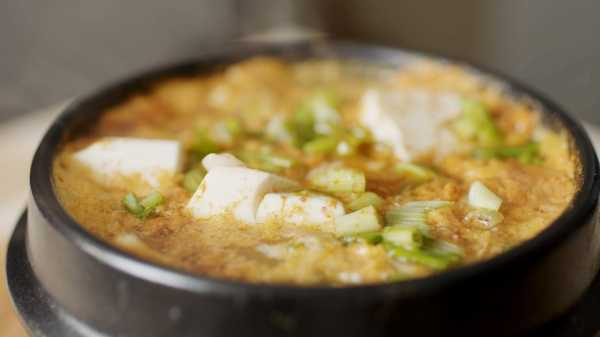 Learning to make soondubu jjigae is more complicated than following a list of ingredients and steps; the process changes each time, according to the chef’s mood.

“I first tasted gochujang because of a boy,” Bryan Washington says, of his introduction to the fermented red chile in the soft-tofu stew soondubu jjigae, a flavor that, he says “highjacked my taste buds” and become an obsession. Washington and his boyfriend ate at Houston’s Korean restaurants “gluttonously, unapologetically,” he recalls in the video above, “scarfing scallion pancakes, lettuce wraps, and hangover soup.” Those meals led Washington to learn how to prepare soondubu jjigae himself, a process he found daunting at first, and which he has written about in our Kitchen Notes department.

We see Washington in his kitchen, preparing dried anchovies for the savory broth. Showing off a handful of the deep red gochujang, he describes its flavor as “spicy and scalding and sweet all at once.” He toasts the anchovies, then assembles a broth, adding whole cloves of garlic alongside mushrooms and chopped onions.

Making soondubu jjigae isn’t just a culinary experience for Washington. As with lots of cooking, making the dish is also about relationships. He’d eaten the soup with his boyfriend, who had grown up with the flavors. And after their breakup—“we split, blah, blah”—Washington got in touch with him to get the recipe, and went on to serve the stew to other loved ones. Learning to make the stew was more complicated than following a list of ingredients and steps; the ex said the process changed each time, according to his mood. Washington learned to develop his own methods. In the video above, Washington walks us through the recipe, and through the mysterious process of expanding one’s palate.