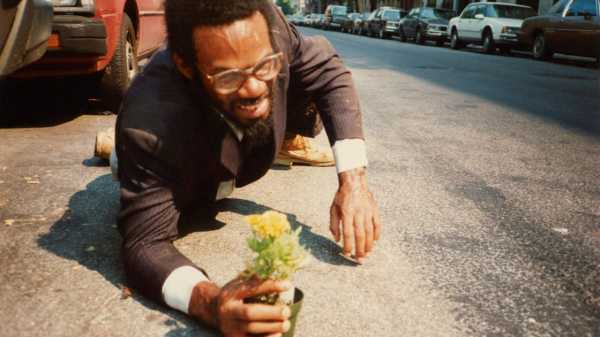 If you use the streets of New York City with any kind of frequency, there’s a good chance you’re a skilled avoider of things that take place at ground level. You likely possess a strategic vision that overlooks everything from the smashed vodka bottles, quizzical rats, dog poop, guerrilla advertising, and knockoff Balenciaga sneakers that populate the city’s low-altitude environs. New Yorkers have perfected a thousand-yard city-block stare and an iPhone strut, to the extent that it’s common to walk past an old friend without acknowledgment, or to seamlessly maneuver around the outstretched hand of the disenfranchised without interrupting one’s morning scroll down the time line. Meanwhile, the performance artist William Pope.L has spent thirty years devising ways to disrupt our inattentive ways of seeing. He just wants us to look down, for once.

Pope.L has perfected crawling as his particular kind of disruption. He has traversed a substantial portion of New York City (and parts of Europe) on his hands, knees, stomach, and elbows, wearing everything from a Superman costume to a sports jersey and Nike sneakers. For his inaugural crawl, in 1978, the artist slowly made his way down Forty-second Street, passing Times Square, wearing a pin-striped suit with a yellow square stitched onto its back. Photos taken during the crawl await visitors at “member,” a career retrospective of the artist’s work at the newly reopened Museum of Modern Art. In a five-image slideshow, a young Pope.L looks soiled and exhausted in the afternoon sun as the city goes about its day, indifferent to his actions. But a small success can be gleaned from the twisted faces of the bystanders as they struggle to comprehend a well-dressed black man dutifully hugging the asphalt. Was he mocking the homeless? Was he actually homeless, or mentally ill? But what really matters is that the bystanders are looking.

For Pope.L, crawling on the street is a way to direct our attention to a world out of view, specifically, to the world of anyone who has lost “verticality”—a term that he uses to describe the function of being wealthy enough, or healthy enough, to remain upright and in motion. This social geometry is Pope.L’s way of exploring inequalities that are often obscured by layers of complicity, guilt, inaction, and a sense of inevitability. It is easier, without a doubt, to look away, especially if verticality is all one has ever known. His first Times Square crawl, undertaken soon after graduating from Rutgers, was a visceral reaction to the circumstances of his aunt and uncle, who were living on the street. Pope.L wanted to produce a sting with his art that would last long after he’d dusted himself off. Speaking with the performance artist Martha Wilson, in 1996, he said, “We’d gotten used to people begging, and I was wondering, how can I renew this conflict? I don’t want to get used to seeing this. I wanted people to have this reminder.”

By the early nineties, the crawls became acts of grinding physical endurance and grim humor, a signature of the artist. For “The Great White Way,” a performance he began in 2001, Pope.L donned a Superman costume and gardening gloves and strapped a skateboard to his back—all the easier to roll through intersections—and began crawling all twenty-two miles of Broadway from the Battery to his mother’s home, in the Bronx. A video taken during “The Great White Way” shows the artist grimacing as his elbows and knees dig into the rough concrete floor of the city, pushing his body down the sidewalk. This gruelling technique was deliberate, the labor itself an essential texture of his art. At MOMA, visitors can examine the obliterated knee pads of Pope.L’s heroic costume, which is laid out like an exhausted-looking exoskeleton.

There’s a monkish simplicity to the crawls, but, as the critic Roberta Smith wrote, the “lameness” that Pope.L assumes leaves more than enough space for an entire second order of performance art to unfold: one that’s found in the reactions of onlookers, as in the story of a black man confronting Pope.L during his crawl in Tompkins Square. First, the man spoke angrily to a white cameraman Pope.L. had hired to document the crawl. Then, even after the pair explained the idea of the piece, the man ran off to find the police, shouting over his shoulder, “You make me look like a jerk!” The exchange was witnessed by the art critic C. Carr, who wrote, “The irony is that the angry man got what [it] was about . . . he cried, ‘I wear a suit like that to work!’ ” There’s a sinister kind of satire embedded in the crawls. From a single viewpoint, one can find racial satire, a stereotype confirmed, or the embodiment of pure human idiocy. 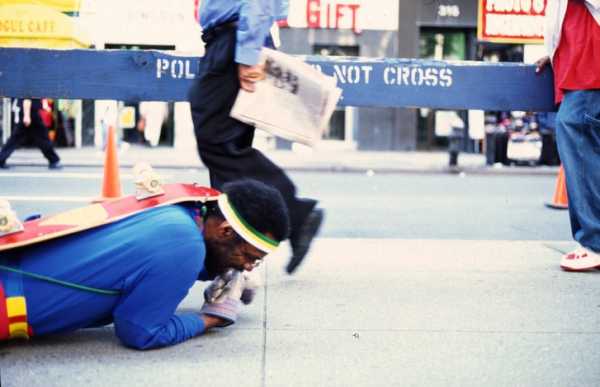 For “The Great White Way,” Pope.L donned a Superman costume and gardening gloves, and began crawling all twenty-two miles from the Battery to his mother’s home, in the Bronx.

One month before his MOMA retrospective opened, Pope.L enlisted a hundred and forty volunteers to crawl a mile and a half through New York City, in a performance piece called “Conquest.” Commissioned by the Public Art Fund, the piece was one of the largest group crawls orchestrated by the artist to date, and was likely the most organized deployment of his artistic absurdities. It was also the first of three major New York installations that the artist has in New York this year, rounded out by a Whitney Museum exhibit titled “Choir.”

Now, at sixty-four years old, Pope.L avoids the perspiration part of art-making, owing in part to a back injury. “I guess my body is smarter than my head,” he told me on the day of the “Conquest” performance. He also believes that the focus should be on the participants. His creative labor is now outsourced to volunteers willing to tackle his surreal assignments. Walking up Horatio Street, in Greenwich Village, on a hot and humid Saturday morning, I could make out the slow-moving dissonance of the performance from two blocks away. A ring of spectators spilled out into the street as five blindfolded volunteers, wearing white “Conquest” shirts, tentatively dragged themselves down the sidewalk in single file.

It was a scene filigreed by Pope.L’s fluency in easy symbolism. At the head of the crawling line, one volunteer carefully swept the sidewalk, intermittently spraying the ground with a scent laced with tobacco and teakwood (a nod to the tobacco crops that were once grown on Manhattan) while a trumpeter ambled alongside the column, improvising in melodic bursts. In addition to being blindfolded, the crawlers clutched flashlights and, if their physical health permitted, wore only a single shoe. The route, which curved down from Greenwich Village, then through Washington Square Park, before finishing in the center of Union Square, was broken into twenty-five segments, each roughly the length of a city block. As the first five crawlers finished their assigned segment, volunteers excitedly helped them up, congratulating each one. The crowd cheered as if they were watching a mini-marathon. Nearby, I overheard a man say, “I think this is a test in groupthink.”

As the crawl struggled through some of the city’s wealthiest neighborhoods, I thought of Jane Jacobs’s writing on the complex order of the city street. “Its essence is intricacy of sidewalk use, bringing with it a constant succession of eyes,” she wrote, in “The Death and Life of Great American Cities,” from 1961. Whereas Jacobs hoped others would see an “intricate ballet” unfolding, Pope.L is a choreographer of urban limbo. As he lingered at the back of the crawl, wearing an unbuttoned oxford shirt, with a backpack slung over his shoulder, he said, “To not move at the same rhythm of the city is a form of resistance. For some people, that’s a smack in the face. What do you mean, you’re not working? The mythology of the city is about this energy, this forward movement, but the pace I was moving was not an acceptable pace.” He nodded toward the spectacle stretched before him. “If you’re going to move at all, why that speed? It’s suspicious, you know?”

As the crawl moved up University Place, toward Union Square, I followed it from across the street. A succession of eyes attempted to make sense of the scene. One woman asked me if someone had “jumped” and nodded up at a towering set of apartment buildings. A middle-aged man, walking with his family, seethed at the group of crawlers he passed, which included a blind woman crawling with her cane. “What? We have to clean up the fucking environment or something?” he said. Four women in color-blocked athleisure wear stopped walking to search their phones for clues. “I think it’s some kind of protest,” one said.

The why of dragging one’s body across the befouled surfaces of the world’s busiest streets has shifted in the past three decades of Pope.L’s performances. This is especially true as the artist’s attempts to wake up the sleepwalkers of society have grown into complex and organized activities, involving dozens of bodies working in physical harmony. There’s a sense that, despite the relative success of the artist’s unconventional methods to spread his ideas about social order, the real truth of a Pope.L piece can only be accessed, you could say, by crawling a mile in his shoe. “One of the problems with . . . my crawl works is they have this marvelous creamy nougat center operating inside the performer, and this space is unfortunately not available in the images and mythologies that surround the work,” he said, in a 2013 interview. Pope.L is the rare performance artist who wants to rid his work of the solipsism that confines all performance art. Rarer yet, when his work is in progress, he’s more or less just another bystander, curiously looking on. “What sort of progress is this performance?” Pope.L wrote of “Conquest.” “Is it a comedy of errors or business as usual or a critical mirror held up to a great American past-time called success?”

As the crawl reached its destination, in Union Square, nearly five hours after it first began, I tried to reconcile the day’s festive attitude—which culminated with Pope.L greeting his street-stained crawlers from a small stage, the cheers of a large crowd, the trumpeter playing “When the Saints Go Marching In,” a documentary crew hastily capturing the details, and volunteers dousing the artist in water like a victorious coach—with something that he had said back in Washington Square Park. Pope.L was talking about the paradox of his work receiving the support of three of New York’s largest art institutions, after forty years of them more or less ignoring it. By every measure, his own career had achieved a certain verticality, though his mind wasn’t far from the uncertainty that defined his existence and, by extension, subsumed his art. “People ask me what all this support will do for performance art. They say, ‘Oh, wow, the problems for performance are over. Modern has come to our rescue! I don’t have to worry anymore.’ But I think performance always needs to be troubled. It needs to have its problems. That’s what gets work done.” Pope.L paused and looked at the sidewalk. “You should fucking worry.”