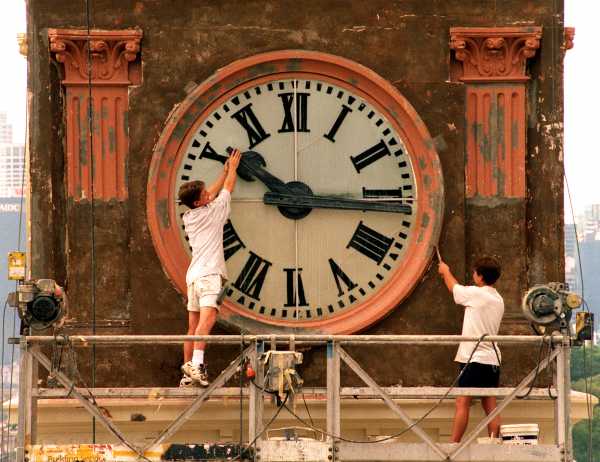 On Sunday, November 3, at 2 am, we’ll turn our clocks back one hour, heralding the end of daylight saving time for much of the country.

The biggest consequence: The change shifts daylight back into the morning hours. For 9-to-5 office workers, it means saying goodbye to leaving work while it’s still light out. And for weekend workers, it means an additional glorious hour of sleep on Sunday. Hurrah!

Yet there’s still a lot of confusion about daylight saving time. The first thing to know: Yes, it ends in the fall, just as the decrease in daylight hours is becoming noticeable.

Let’s sort it all out.

1) Why do we need to “save” daylight hours in the summer?

Daylight saving time in the US started as an energy conservation trick during World War I and became a national standard in the 1960s.

The idea is that in the summer months, we shift the number of daylight hours we get into the evening. So if the sun sets at 8 pm instead of 7 pm, we’d presumably spend less time with the lights on in our homes at night, saving electricity.

It also means that you’re less likely to sleep through daylight hours in the morning (since those are shifted an hour later too). Hence “saving” daylight hours for the most productive time of the day.

Overall: We agree, the name is kind of confusing.

No, it’s definitely called “daylight saving time.” Not plural. Be sure to point out this common mistake to friends and acquaintances. You’ll be really popular.

3) Does it actually lead to energy savings?

As Joseph Stromberg outlined in an excellent 2015 Vox article, the actual electricity conservation from the time change is unclear or nonexistent:

4) Why doesn’t Arizona or Hawaii change its clocks?

Arizona has a simple way to deal with daylight saving time: Most of the state ignores it.

Fifty years ago, the state legislature opted to keep the clocks in most of the state in standard time all year. One reason: Arizona summers are very hot, and an earlier sunset gives residents more time to enjoy tolerable temperatures before bed, as AZcentral explains. (What’s confusing: The Navajo Nation in Arizona does use DST.)

Hawaii also doesn’t observe DST. The island state is the farthest south of all states and rejected it because it doesn’t see a hugely noticeable daylight hour difference between winter and summer months.

5) Didn’t a bunch of states pass laws making daylight saving time permanent? What happened with those?

In the November 2018 election, Californians voted in favor of a ballot measure that paves the way for this. The measure, which passed with 60 percent of the vote, simply grants the California Legislature the power to vote to change the clocks permanently. Any changes would need to start with a two-thirds majority vote in the state legislature — which hasn’t happened yet.

And even then, the time change wouldn’t be a given. The federal government would have to approve it; that has uncertain prospects too.

In 2018, the Florida government approved the delightfully named Sunshine Protection Act, which seeks to permanently leave Florida in daylight saving time. (Essentially, it would mean that Florida will be one hour ahead of the rest of the East Coast during the winter months.) Massachusetts has looked into a similar measure, too.

The bill is still waiting on approval from Congress before it can go into effect. Florida Sen. Marco Rubio has put forth a few bills to push the approval forward, but they haven’t moved at all.

Arkansas, too, passed a bill to make daylight saving time permanent, but it included the condition that the changes wouldn’t go into effect until its bordering states changed their clocks permanently too. Other states that have approved legislation to enact year-long daylight saving time include Washington, Tennessee, Oregon, Nevada, and Alabama. But none of the changes can go into effect without approval from the federal government.

So for now, all these states will be changing their clocks on Sunday along with the rest of us. Sorry!

(It appears other countries are also interested in getting rid of DST, or keeping it in place forever: Some members of the European Parliament — the governing body of the European Union — want to abolish clock changes there too.)

6) What would happen if daylight saving time were abolished? Or if it were extended forever?

It’s worth thinking about what would happen if Congress abolished daylight saving time (or kept it going all year long).

How might our patterns change? Blogger and cartographer Andy Woodruff decided to visualize this with a great series of maps.

The goal of these maps is to show how abolishing daylight saving time, extending it all year, or going with the status quo changes the number of days we have “reasonable” sunrise and sunset times.

Reasonable, as defined by Woodruff, is the sun rising at 7 am or earlier or setting after 5 pm (so one could, conceivably, spend some time in the sun before or after work).

This is what the map looks like under the status quo of twice-yearly clock shifts. A lot of people have unreasonable sunrise times (the dark spots) for much of the year: 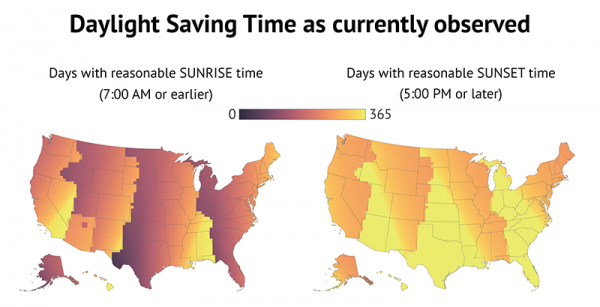 Here’s how things would change if daylight saving were abolished (that is, if we just stuck to the time set in the winter all year). It’s better, particularly on the sunrise end: 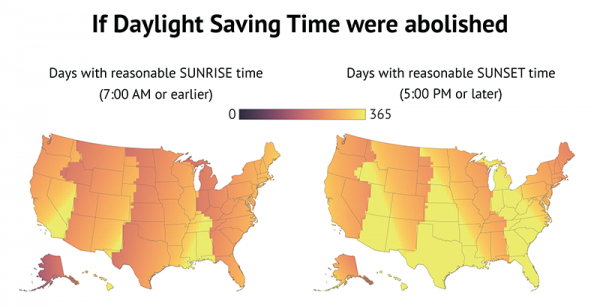 And here’s what would happen if daylight saving were always in effect. The sunrise situation would actually be worse for most people. But many more people would enjoy after-work light — and there’s a strong argument to make that this after-work light is actually worth more. (More on that below.) 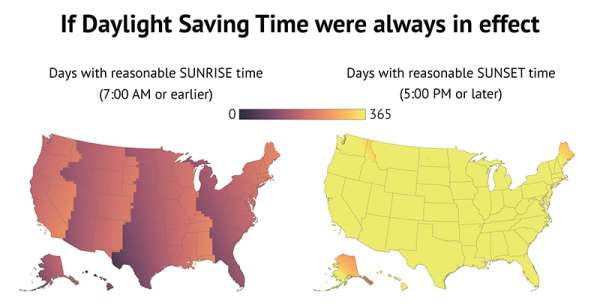 (Note: The length of light we experience each day wouldn’t actually change; that’s determined by the tilt of Earth’s axis. But we would experience it in times more accommodating for our modern world. Be sure to check out the interactive version of these maps on Woodruff’s website.)

In 2015, Stromberg made the compelling case that the daylight saving time shift into the evening should be extended year-round. Having more light later could benefit us in a surprising number of ways:

A bit. When we shift clocks forward one hour in the spring, many of us will lose that hour of sleep. In the days after daylight saving time starts, our biological clocks are a little bit off. It’s like the whole country has been given one hour of jet lag.

One hour of lost sleep sounds like a small change, but we humans are fragile, sensitive animals. Small disruptions in our sleep have been shown to alter basic indicators of our health and dull our mental edge.

And when our biological clocks are off, everything about us is out of sync. Our bodies run this tight schedule to try to keep up with our actions. Since we usually eat a meal after waking up, we produce the most insulin in the morning. We’re primed to metabolize breakfast before even taking a bite. It’s more efficient that way.

(There’s some good research that finds taking over-the-counter melatonin helps reset our body clocks to a new time. Read more about that here.)

Being an hour off schedule means our bodies are not prepared for our actions at any time of the day.

In 1999, researchers at Johns Hopkins and Stanford universities wanted to find out what happens on the road when millions of drivers have their sleep disrupted.

Analyzing 21 years of fatal car crash data from the US National Highway Transportation Safety Administration, they found a very small, but significant, increase in road deaths on the Monday after the clock shift in the spring: The number of deadly accidents jumped to an average of 83.5 on the “spring forward” Monday compared with an average of 78.2 on a typical Monday.

And it seems it’s not just car accidents. Evidence has also mounted of an increase in incidences of workplace injuries and heart attacks in the days after we spring forward.

8) How can we abolish daylight saving time, or extend it year-round?

That’s easy! Well, not really: All it would take is an act of Congress. But I wouldn’t count on this happening any time soon.