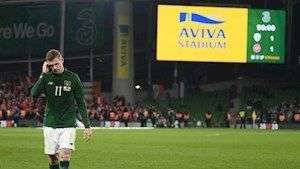 Age Hareide has tipped the Republic of Ireland to join Denmark at the Euro 2020 finals after seeing his side edge across the finishing line in Dublin.

A 1-1 draw at the Aviva Stadium on Monday evening was enough to send the Danes through automatically at Ireland’s expense, leaving Mick McCarthy’s men to fight it out in next March’s play-offs.

However, Hareide admitted his team was fortunate to emerge with the point they needed on a night when Ireland threatened to secure their first competitive win over Denmark since 1979.Republic of Ireland’s Callum Robinson (left) and Denmark’s Yussuf Poulsen (right) battle for the ball during the UEFA Euro 2020 Qualifying match at the Aviva Stadium, Dublin (Niall Carson/PA)

He said: “We didn’t play well and are lucky to get away with a draw. Ireland played well and if they keep going like that, they will probably come through the Nations League play-offs and qualify.”

Hareide’s comments may come as little comfort to his opposite number, who saw his team turn in arguably their best performance of the Group D campaign when they needed it most, but ultimately fail to find the cutting edge to make it count.

They fell behind to Martin Braithwaite’s 73rd-minute strike, which came against the run of play, but ensured that the result remained in doubt all the way to the whistle when full-back Matt Doherty levelled with five minutes of normal time remaining.

Asked what he thought of the performance, McCarthy said: “I said before the game if they leave everything on the pitch and give everything for me, I would take that, so I’ve got to take the result.

“How many goals have we scored, seven? Out of eight games? That’s quite clearly not clinical enough. But we don’t get beat in too many games, and maybe a bit of luck, a bounce of the ball at the end, we nick it.

“Who knows? Had we nicked it, we’d have deserved it.”

Ireland will discover on Tuesday who their semi-final opponents will be – Slovakia and Wales seem the most likely candidates – but McCarthy is confident they will give anyone a game if they play as they did against the Danes.

He said: “I have three months to prepare for that. We’ll see who we get and I’ll plan for it when we get it.

“If we play the way we are playing and play as well as that against other teams, we can beat them.”

Mick McCarthy: We can qualify for Euros with repeat of Danish display