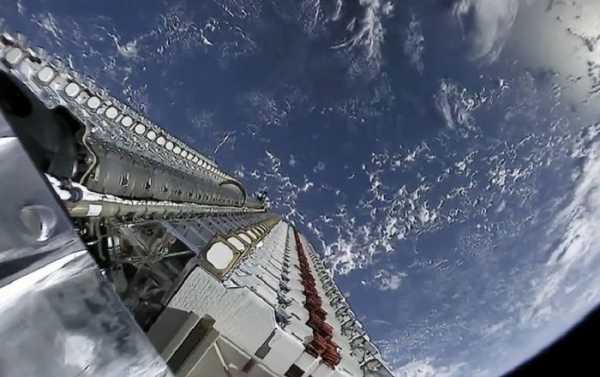 SpaceX currently operates over a hundred internet satellites in low-Earth orbit, but plans to increase that number to 42,000 over the next decade. Scientists warn that the growing number of small objects, which expose their telescopes to the light they reflect, may threaten “astronomy itself.”

Astronomers are complaining that the new batch of Elon Musk’s internet satellites is ruining their observations of the universe, months after the SpaceX boss promised to take steps to make them less reflective.

Clarae Martinez-Vazquez, an astronomer with the Cerro Tololo Inter-American Observatory in Chile, has said that 19 Starlink satellites flew in the field of view of their telescope, outfitted with the Dark Energy Camera (DECam).

“The train of Starlink satellites lasted for over 5 minutes!” she wrote in an angry tweet. “Rather depressing… This is not cool!”

Cliff Johnson, a postdoctoral fellow at Northwestern University in Illinois, in response posted a series of images crossed-out with satellite trails, purportedly left by Starlink satellites as well. That’s due to the surface of the satellites made of highly reflective material – such objects can escape the naked eye but not the sensitive optics of astronomical telescopes.

The intrusion came after Elon Musk’s aerospace company SpaceX launched 60 WiFi satellites into space last week. It was the second batch of Starlink, its planned constellation of small high-speed internet satellites, after the deployment of the first 60 transmitters in May this year.

That constellation was initially meant to comprise nearly 12,000 satellites, but last month SpaceX filed the paperwork to deploy up to 30,000 more. According to the European Space Agency, 42,000 would be more than eight times the current number of satellites orbiting Earth, and would increase the risk of collisions in orbit.

Despite the good intention of bringing cheap internet to all locations on Earth, even the most distant ones, the mega-constellation project has already caused concerns in the scientific community.

Soon after the first batch was carried into space, the International Astronomical Union issued a statement saying that such constellations “can pose a significant or debilitating threat to important existing and future astronomical infrastructures.”

The US National Radio Astronomy Observatory and the Green Bank Observatory likewise conveyed their concerns to SpaceX, and Elon Musk said in late May that he asked Starlink designers to make their satellites less reflective.

SpaceX has reportedly pledged to paint the Earth-facing side of its satellites black to make them less reflective – although the newly-launched batch appears to be as shiny as the previous one.