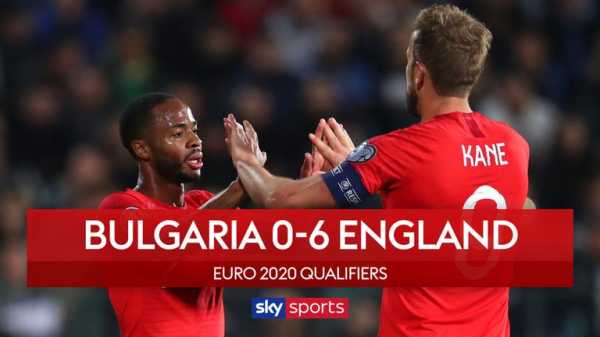 5:02 Highlights of the European Qualifying Group A match between Bulgaria and England

With England likely to wrap up top spot in Group A, Czech Republic and Kosovo will battle it out on November 14 in a bid to secure the runners-up spot and a place at next summer’s tournament.

A win for Czech Republic, who beat England last month, would assure them of qualification, while a draw or victory for Kosovo would take the fate of the runners-up spot down to the final fixtures.

The draw for the finals will take place in Bucharest, Romania on November 30 with the 24 qualifying teams to be drawn into six groups of four.

At this point in November, the four final spots — set to be decided in March 2020’s play-offs — will not be known, but they will still be drawn into a group.

Group B — Work still to do for Portugal

Top spot in Group B has gone to Ukraine after their victory over Portugal last time out.

It leaves the Nations League winners needing to better Serbia’s results in the final two matches of qualification if they are to seal an automatic place at next summer’s tournament. 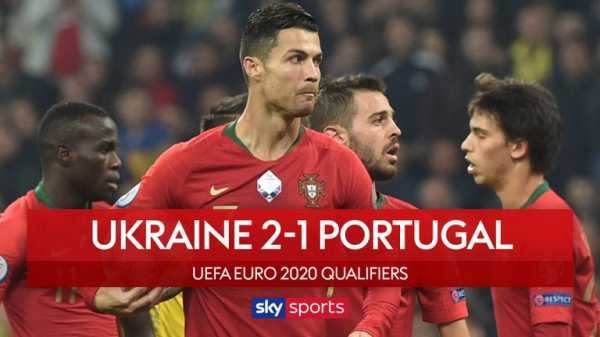 3:46 Highlights of the European Qualifying Group B match between Ukraine and Portugal

If results do not go their way, then there’s always the play-offs for Cristiano Ronaldo and his team-mates.

Coming up: Thursday — Portugal vs Lithuania, Serbia vs Luxembourg; November 17 — Luxembourg vs Portugal, Serbia vs Ukraine

Who are currently in the play-offs?

These are the teams guaranteed a play-off place at least:

Michael O’Neill has since been appointed the new Stoke manager but he will oversee the games against Germany and Netherlands plus a potential play-off in March.

O’Neill’s side face an uphill battle to qualify automatically as they look to leapfrog one of those countries. 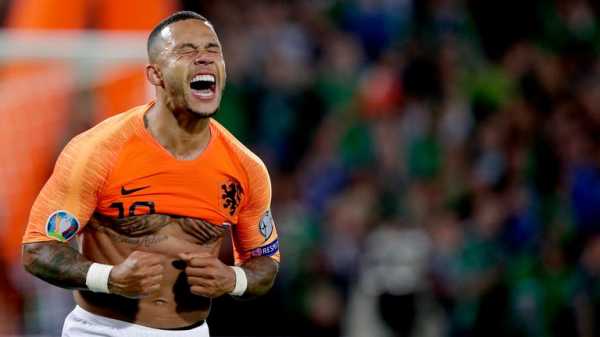 4:37 Highlights of the European Qualifier Group C game between the Netherlands and Northern Ireland

Northern Ireland need two wins from those games if they are to have a realistic chance of automatically reaching next summer’s tournament.

If Netherlands and Germany both avoid defeat against Northern Ireland then they will qualify for Euro 2020, with Ronald Koeman’s side the favourites to top the group because of their superior head-to-head record.

Group D — All to play for

It’s tight at the top of Group D with Republic of Ireland, Denmark and Switzerland all vying for the automatic qualifying spots.

Despite defeat in Switzerland, Mick McCarthy’s side, who still top the group having played a game more, know victory against second-placed Denmark in Dublin on November 18 will see them qualify for next summer’s tournament. 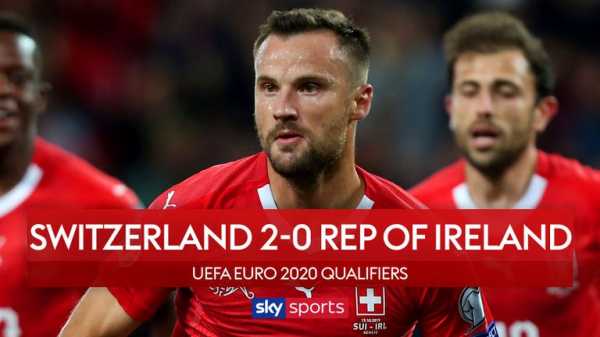 3:52 Highlights of the European Qualifying Group D match between Switzerland and Republic of Ireland

Switzerland, who currently sit third in Group D just one point behind Ireland and Denmark, are now in pole position to top the group.

Coming up: Friday — Denmark vs Gibraltar, Switzerland vs Georgia; November 18 — Gibraltar vs Switzerland, Republic of Ireland vs Denmark.

Croatia are on course to qualify and a point at home against Slovakia on November 16 should be enough to see them get the job done.

Meanwhile, Wales, who are currently fourth in the group, will need to beat Azerbaijan, also on November 16, to keep their qualification dreams alive. 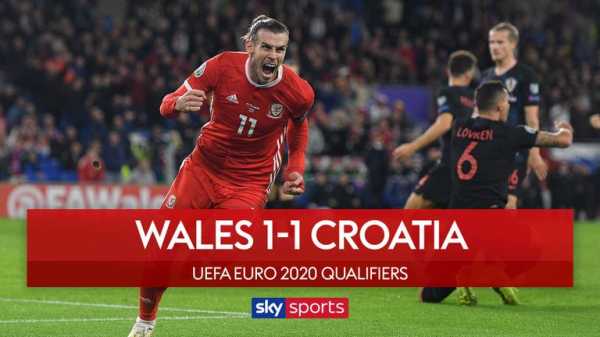 3:09 Highlights of the European Qualifying Group E match between Wales and Croatia

Depending on the result in Croatia, a Wales win in Baku could then set up a winner-takes-all clash with Hungary in Cardiff on November 19.

Coming up: Saturday — Azerbaijan vs Wales, Croatia vs Slovakia; November 19 — Slovakia vs Azerbaijan, Wales vs Hungary.

Spain have sealed their place at Euro 2020 but the battle to join them is now where the interest lies in this group.

Sweden, Romania and Norway are all looking to secure automatic qualification alongside Spain with two more matchdays to come.

Sweden are currently second in the group but face a crucial trip to Romania on November 15 before a home game against Faroe Islands three days later. 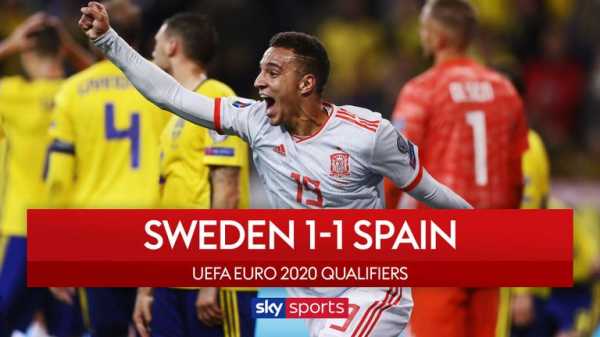 3:15 Highlights of the European Qualifying Group F match between Sweden and Spain

Romania are third, one point behind Sweden and three ahead of Norway, but they face difficult games against Sweden and Spain this month.

Norway have plenty to do if they are to pip Sweden and Romania to qualification but matches against Faroe Islands and Malta are very winnable on paper.

Poland have already booked their spot at Euro 2020 but there is a four-way tussle between Austria, North Macedonia, Slovenia and Israel to join them at next summer’s tournament.

Austria are in pole position though as they hold a five-point advantage over North Macedonia — who they face on November 16 — Slovenia and Israel.

Turkey currently lead Group H from France because of their superior head-to-head record against the world champions.

Both sides hold a four-point advantage over third-placed Iceland and are firm favourites to qualify with France set to face Moldova and Albania and Turkey due to play Iceland and Andorra this coming fortnight. 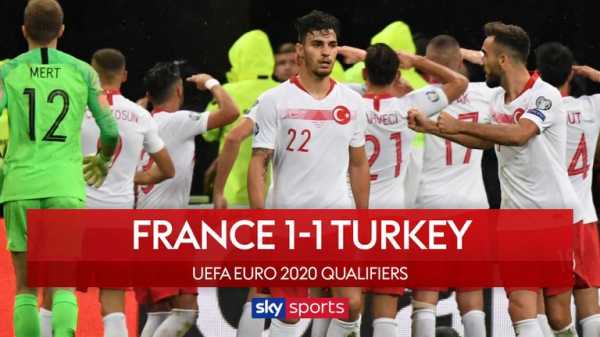 4:30 Highlights of the European Qualifying Group H match between France and Turkey

Victory for Iceland in Istanbul on November 14 would give them a chance of automatic qualification, but Turkey will have a second opportunity to secure a place in the top two when they face minnows Andorra three days later.

Coming up: Thursday — Turkey vs Iceland, Albania vs Andorra, France vs Moldova; November 17 — Albania vs France, Andorra vs Turkey, Moldova vs Iceland.

Top spot is the only thing left to play for in Group I, but with Belgium three points ahead of Russia with a better goal difference (+29 compared to +23), it would take some swing to stop Roberto Martinez’s side.

However, the Russians will be hoping they can perform a miracle when the two sides face each other on November 16 in St Petersburg. 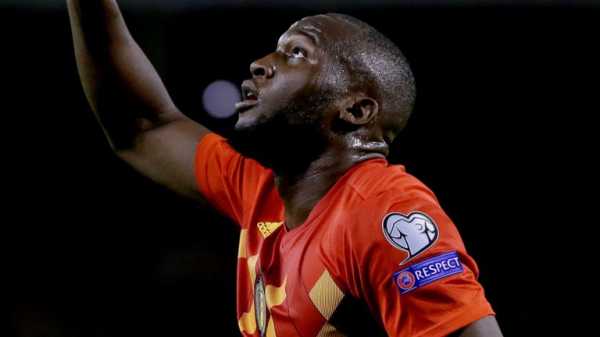 3:51 Highlights of the European Qualifier between Belgium and San Marino

Meanwhile, Scotland’s qualifying campaign did not go to plan, but they do have a second chance after securing a play-off spot thanks to their performance in the Nations League.

Italy are the runaway winners of Group J but the story is who could be joining them at Euro 2020.

Finland are just a win away from qualifying for their first major tournament with games against Liechtenstein and Greece on November 15 and 18 respectively. 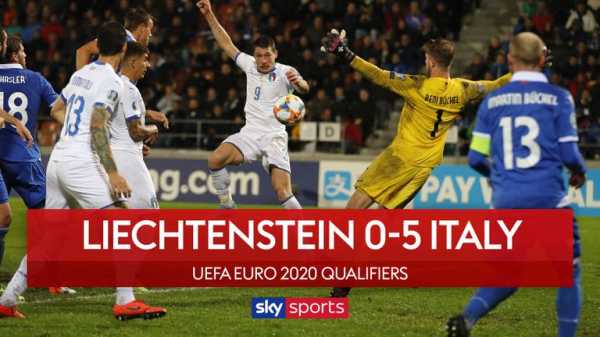 4:10 Highlights of the European Qualifying Group J match between Liechtenstein and Italy

Armenia and Bosnia & Herzegovina will be waiting in the wings should Finland slip up.

Watch November’s European Qualifiers on Sky Sports from November 14-19 or follow all the action across Sky Sports’ digital platforms.