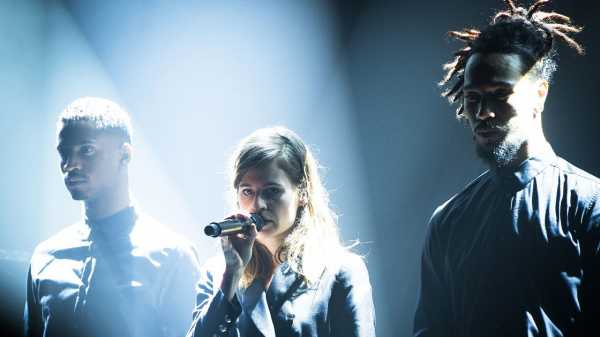 Virginia Woolf often wandered around London for hours, working through ideas as she walked. One favorite route took her from placid Bloomsbury into seedy Soho, where she haggled over silk stockings at the Berwick Street Market. These excursions exhilarated her: in Soho, Woolf could be anyone, even a woman who desired women. While she strolled, Woolf thought about the poet Vita Sackville-West, who later became her clandestine lover, and daydreamed about a character who could switch genders at will—the eventual protagonist of her 1928 novel, “Orlando.”

Today, a block away from the Berwick Street Market, there is a shuttered night club called Madame Jojo’s, which went dark in November. The Guardian called its closing “the nail in the coffin” of the gentrifying neighborhood’s once squalid glamour. But in 2010 Jojo’s was a red-velvet refuge for outcasts that showcased drag queens and voguing battles. That year, a twenty-two-year-old student named Héloïse Letissier wandered into the club. Newly arrived from Paris, she was going out by herself in London every night; as she later told a journalist, she was searching for “weird parties, queer parties.”

Letissier, who was born in Nantes, had fled to London after a heartbreak and a stunted effort at drama school. She knew that she was queer, but she had not yet figured out how to express her sexuality; she knew that she was a natural performer, but she hadn’t found the right medium with which to express her charisma. When she stumbled upon a trio of drag queens mugging onstage at Jojo’s, something inside her went neon. This is what she had been searching for: spectacle, pageantry, and a tragicomic celebration of difference. She befriended the queens and asked them to tell her what to do next. They told her to start writing songs.

Letissier did, and soon became one of France’s biggest pop stars. Now twenty-seven and living in Paris, she recently won the Female Artist of the Year award at the Victoires de la Musique, the French version of the Grammys. She regularly appears on the covers of Parisian fashion magazines, a shimmering jolie laide in tailored tuxedo jackets. As a performer, she is known as Christine, the pansexual frontperson of the electro-pop outfit Christine and the Queens, which Letissier named in homage to her London mentors. (Christine and the Queens is, in fact, a solo act—like “Orlando,” it can all get a little confusing.)

The song that made Letissier famous in France is “Saint Claude,” the lead single from her second LP, “Chaleur Humaine,” or “Human Warmth.” The track is a pleasing slow burn; a swelling piano vamp is paired with a relaxed R. & B. groove as gentle as a resting heartbeat. Letissier’s voice switches from a buttery, seductive alto to a floating falsetto that is both bright and full of air. The (https://youtu.be/ZzFYmz2lfT4) for “Saint Claude” makes it delightfully clear that Letissier took notes at Madame Jojo’s. In the clip, she dances alone in a crimson room, dressed in a slim Dior Homme suit, a crisp white button-down, and patent-leather brogues. She twirls her hands in the air, flashes jazz hands, and grabs her pelvis like Michael Jackson. She is at once an acrobatic gamine and a Chaplinesque tramp. Letissier refers to this persona as a “half-lady.”

On October 16th, Letissier released her first English-language album, “Christine and the Queens.” Bilingual, bisexual, and able to blend existing pop styles into new forms, she seems poised to attract a wider audience. Her beats, which she produces herself, are often endearing combinations of high-hat pings and throbbing bass synths; if there is such a thing as whimsical 808s, Letissier has mastered them. She nods to French pop history—she often whispers into the microphone, evoking the chummy flirtations of Françoise Hardy and France Gall—and also to the American pop canon, especially the sunny harmonies that radiated out of Laurel Canyon in the nineteen-seventies.

Christine is a seductive live performer: she leaps into crowds with glitter in her pockets, smushing the stuff against her sweaty face until she sparkles like a disco ball. In one of her requisite men’s suits, she enacts crisply choreographed routines with a group of androgynous black backup dancers; their sharp hand movements echo those of Willi Ninja, the New Yorker known as the godfather of voguing. (There has been some online chatter about Letissier’s cultural appropriation, but her collaboration with her dancers feels more like an earnest blurring of identities than a cynical exploitation.)

The standout track on “Christine and the Queens” is the first, “iT,” and it serves as a kind of mission statement. The song begins with a tremolo piano that suggests the beginning of a vaudeville act. The beat, an oscillating drone of hand claps and metallic drums, runs underneath a cheerful bass line and mellow background vocalise. For electronic dance music, it is wonderfully soothing. Listening to it feels like that glorious moment when you duck out of a club for air and hear diffused rhythms rumbling through the walls.

The lyrics of “iT” directly address Letissier’s desire to shuttle between male and female. In the chorus, she sings, “I’ve got iT / I’m a man now / And I won’t let you steal iT / I bought iT for myself / I’m a man now.” A few verses after this declaration, however, she laments the difficulty of trying to live like Orlando: “She wants to be born again / But she’ll lose / She draws her own crotch by herself / But she’ll lose because it’s a fake.”

Throughout the album, Letissier’s fantasies of freedom are tinged with a melancholy awareness of limits. In “No Harm Is Done,” a bass-heavy, almost Gothic track featuring the Philadelphia rapper Tunji Ige, she sings about yearning for human connection but defaulting to solitude: “Wanna take the lead but I roam all alone / With a heart so hollow.” This sadness can be felt onstage, too: even when Letissier is covered in sparkles under a spotlight, she can sound as if she were wandering the streets alone.

Many of the songs on "Christine” are English translations of her French-language work. But there are a few new tracks, and the best one is the gorgeous, anthemic “Jonathan,” which she wrote with the American singer Mike Hadreas, who performs under the name Perfume Genius. (A (http://pitchfork.com/news/61777-christine-and-the-queens-teams-with-perfume-genius-for-haunting-jonathan-video/) was released today.) Hadreas’s 2014 record, “Too Bright,” was itself a triumph of sumptuous, androgynous pop; like Letissier, he is a gay artist riffing on desire and isolation, to beautiful effect. On “Jonathan,” their voices weave in and out of a rambling piano line, to the point that it becomes impossible to distinguish one singer from the other. It is a lovely distillation of the Christine and the Queens concept: finding oneself by getting lost.