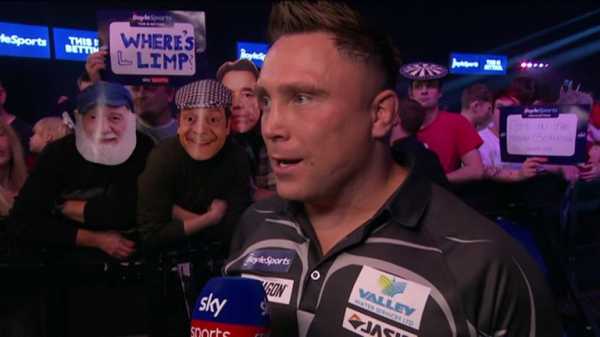 Price produced the performance of the night, booking his place with a demolition job on Demolition Man Darren Webster, the defending champion ran out an emphatic 10-1 winner and he was joined in the last eight by Anderson, who came through the final match of the evening against fellow Scot Robert Thornton.

Welshman Price started fast and never looked back. He was 5-0 up at the end of the first session with an average of 96 and hitting a clinical five of eight darts at double.

Webster stopped the rot in the opening leg of the second session but the Iceman ploughed on and a four-leg burst took him to the brink of the quarter-finals, a place he sealed with the minimum of fuss for a 10th win from his last 11 Grand Slam matches.

Anderson came through a much tougher contest against a rejuvenated Thornton, who will take plenty from the week but ultimately fell to a 10-8 defeat.

The two-time world champion has made no secret of his desire to lift this title and he had to dig deep against the 2013 runner-up who raced into a 4-1 lead early on, firing in finishes of 117 and 110 on the way.

Anderson’s response was to reel off five legs in succession to take a 6-4 lead and that proved vital as, despite a valiant attempt, ‘The Thorn’ could not quite take his chances at the key moments.

He rallied from 7-5 down to 7-7 thanks to a brilliant break of throw with a 115 finish. However, Anderson claimed three of the last four legs to set up the rematch everyone wants to see, 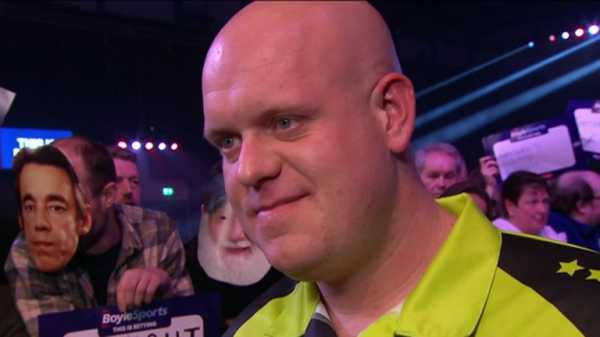 2:27 Michael van Gerwen hit nine 180s in his 10-7 win over Ian White but was not happy with his shots at the doubles

Van Gerwen’s quest for a fourth Grand Slam title saw him battle back from 6-4 down to beat White 10-7 with the latter’s missed darts at double proving crucial.

A strange match saw both men average around 100 for most of the contest, but miss 44 darts at double between them, with Van Gerwen finding his range when White’s touch deserted him, in particular in the 12th leg when Diamond missed seven darts for a 7-5 lead.

The Dutchman opened with a 12-darter that featured two 180s, but White hit back with two of his own on the way to the second leg that was to prove the match barometer with a host of missed darts.

Van Gerwen broke for a 3-1 lead before White struck just before the first interval, pinning a brilliant 143 finish to draw back within one and he then levelled the match after the break 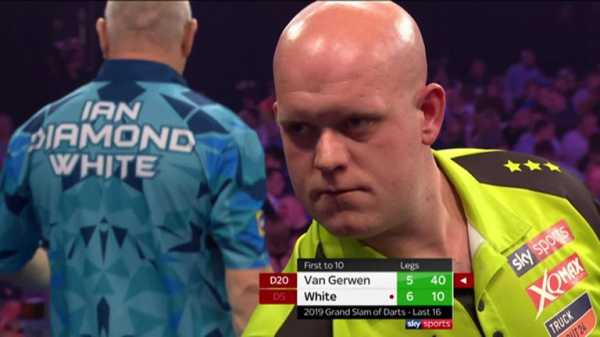 1:37 White failed to extend his lead, missing seven shots at double to hold his leg and Van Gerwen eventually took advantage after 21 darts

‘Diamond’ took out a nerveless 110 for the lead and then a third leg on the spin before Van Gerwen missed two darts to level the match and White opened up a two-leg advantage.

A dart at double 10 for a 128 finish went begging from White for a three-leg lead before a fourth leg of the session handed him a 6-4 advantage to stand within touching distance of victory, only to wilt.

White was narrowly short of tops for a 120 finish and Van Gerwen was back within one before he levelled in an astonishing 12th leg where White missed seven darts at a double and the world No 1 never looked back.

He reeled off four of the last five legs thanks to White’s missed opportunities and booked a quarter-final spot for the fifth straight year. 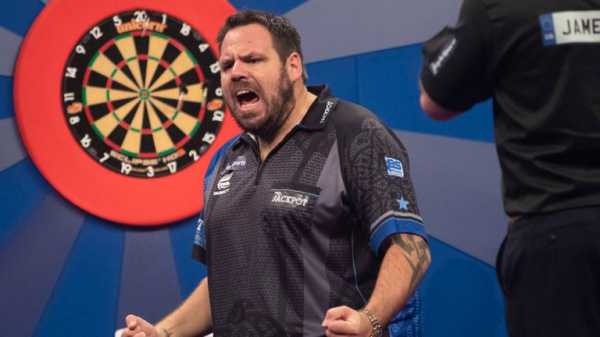 3:40 Adrian Lewis came back from 9-6 down, to defeat James Wade 10-9 to get through to the quarter-finals

Lewis booked a place in his first televised quarter-final in more than two years, reeling off the last four legs to reach his fourth Grand Slam quarter-final and leave two-time runner-up Wade to reflect on what might have been.

After a first session that went with throw, the pair traded breaks midway through the second session, Jackpot was first to strike for a 4-3 lead but Wade hit back for a 161 finish which looked likely to prove pivotal. 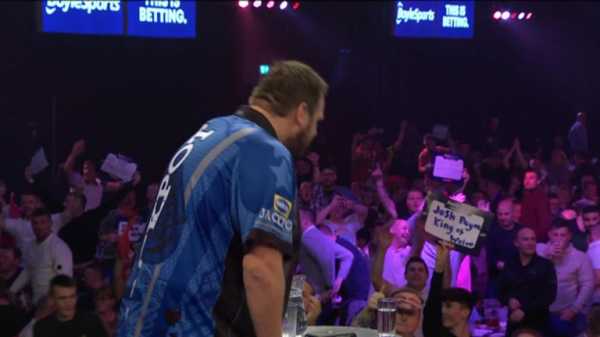 1:26 Wade had a shot at the bullseye to win the game, then Lewis finished with a 110 checkout in the deciding leg

With the scores level, ‘The Machine’ took out a finish of 74 thanks to double top and then, with Jackpot waiting on the same score in the next leg, Wade took out 88 on bullseye for a 6-4 lead.

He made it four legs on the bounce and a three-leg advantage and, while Lewis stopped in the rot in the 12th leg, the pair traded the next four legs to leave Wade on the brink at 9-6

However, Jackpot produced an inspired 12-dart leg to close back within two legs and then took out 81 amid a barrage of 180s and 140s to trail 9-8.

The two-time world champion remarkably levelled the contest but only after turning down a dart at bullseye to open the door for Wade, who missed a dart at bull for a match-winning 161, before Lewis sealed a memorable victory.

Coverage of the Grand Slam of Darts continues on Sky Sports Action & Main Event from 7pm on Friday night.