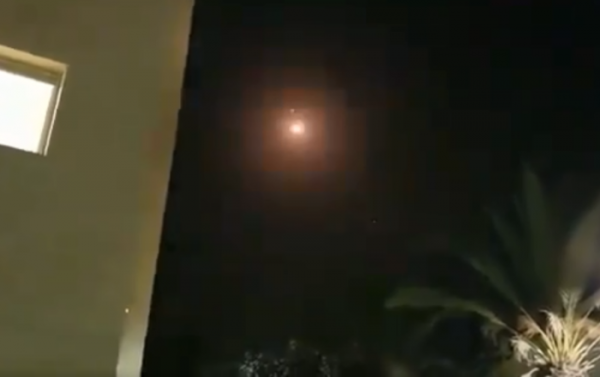 After sitting out of this week’s conflict, it appears that Hamas may now be wading into the turmoil after issuing stern words of warning to Tel Aviv and allegedly agreeing to cooperate with other Gaza-based militants.

After two rockets flew into Israel overnight Friday-Saturday, a spokesperson for the Hamas terrorist group issued a statement warning Israel that it “will not be allowed to choose the time and place of [military] campaigns.”

The Gaza Strip-based group’s spokesperson, Fawzi Barhoum, reportedly elaborated in a statement that not only does Hamas get to decide when military confrontations with the Jewish state occur, but that “Israel bears the consequences and results of its ongoing aggression.”

Reports across the Israeli media say that the rockets entered the Beersheba area of southern Israel and immediately set off screaming air-raid sirens. The projectiles were reportedly intercepted swiftly and shot down by Israel’s Iron Dome missile defence system. The Israeli Defence Forces (IDF) said that they believe the missiles were fired by Hamas, and not the Islamic Jihad group that it has been engaged in hostilities with across the Gaza border for most of this week.

Potentially suggesting an escalation in violence, the IDF announced that it has responded in kind to the rocket fire by striking “Hamas terror targets” in Gaza. Up until this latest incident, Hamas had largely sat on the sidelines of Israel’s most recent conflict with Islamic Jihad.

An IDF statement released on Saturday morning said that, “the Hamas terror organisation is responsible for everything in the Gaza Strip and will bear the consequences of terror acts carried out against Israeli citizens.”

Israel’s Channel 13 News reported that Hamas chief Ismail Haniyeh and Islamic Jiahd leader Ziad Nahala communicated by telephone on Friday shortly before the two rockets entered Israeli airspace. Reportedly, the two sides have agreed to ramp up cooperation with one another against Israel, and moreover, that they believe the tenuous Egypt-brokered ceasefire will collapse, sparking renewed conflict.

The development comes on the heels of news that senior Hamas commanders were twice prevented from entering a mourning tent for Palestinian Islamic Jihad chief, Baha Abu al-Ata, whose targeted assassination by Israel caused two days of fighting in the Gaza Strip this week. In the video, mourners, as well as Islamic Jihad fighters, can be seen shouting at two Hamas leaders, Mahmoud al-Zahar and Ahmed Bahar, for the terrorist group’s decision not to take part in this week’s hostilities, which saw some 450 rockets fired into Israeli territory.