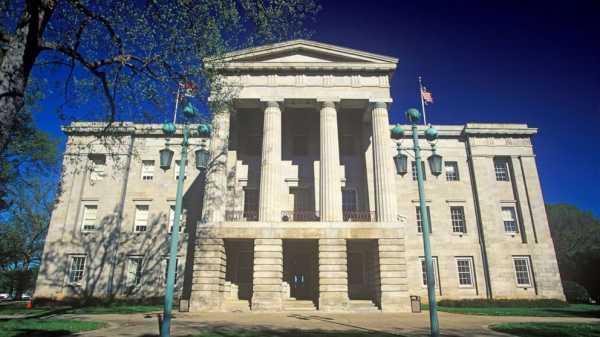 In North Carolina, a closely-watched swing state that for years has had lawsuits winding through the courts amid partisan claims of voter disenfranchisement, a new series of legal actions could have a big impact in the upcoming 2020 election.

On Friday afternoon, the state Senate approved the newly-redrawn GOP maps, setting up the congressional split to be 8-5 GOP control, as opposed to the current 10-3 Republican advantage.

With the passage of this new map, two Republican districts, the 2nd and the 6th would shift into more urban territory, likely weakening the Republican advantage. These two seats are currently held by GOP Reps. George Holding and Mark Walker. Democrats are already gearing up for new legal challenges and asked the courts to expedite their review of the new map, according to lawyers carrying the case, earning pushback from Republicans in the changed districts.

“Much like the abusive attempt to impeach President Trump, activist judges, career bureaucrats and politicians are locking arms to override the will of the voters,» Rep. Walker said in a statement Friday. «Both acts hurt North Carolinians and damage the faith we have in our elections. I will continue to serve our constituents with all of my heart and strength, wherever that path leads.»

Democrats contend that the new map, drawn by a Republican-led legislature, which has historically had unconstitutional maps overturned by the court, remains a partisan gerrymander despite the changes.

«This new map is just more of the same, replacing one of the most blatant partisan gerrymanders in the country with another extreme partisan gerrymander,» North Carolina Democratic Party Chairman Wayne Goodwin said in a statement. «We hope the courts will step in to protect every North Carolinians’ right to make the voice heard and remain steadfast in our commitment to an enacting independent, nonpartisan commission to draw future lines.»

And late last month, state and national Democrats filed a lawsuit to overturn the early voting restrictions put in place in 2018 by the Republican-controlled state legislature, which was vetoed by Democratic Gov. Roy Cooper, but overridden by the General Assembly and signed into law. 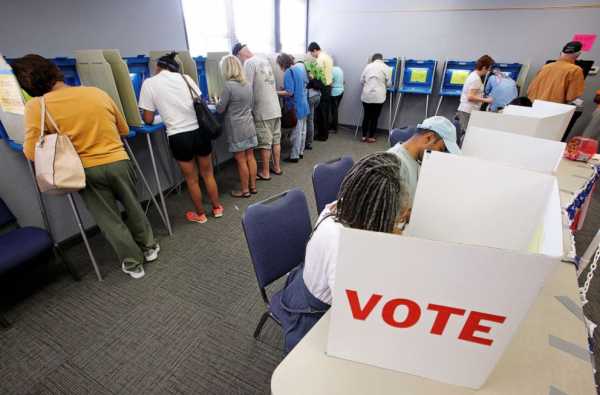 In this Oct. 20, 2016, file photo, people cast their ballots for the 2016 general elections at a crowded polling station as early voting begins in Carrboro, N.C.

Those restrictions prohibit early voting the Saturday before election day for the first time in decades — a period in which Democrats and African-Americans tend to vote. On the same day, a state court decided with an injunction that North Carolina’s Republican-drawn 2020 congressional maps were unconstitutional.

«With control of everything from the White House and Congress to the Governor’s mansion and the General Assembly on the ballot next year, it is vital that every voter can freely and easily make their voice heard,» Goodwin said in a statement. “North Carolina Democrats are committed to lowering hurdles to the ballot box, not erecting new ones, and we will never waiver from our commitment to make voting easier and more accessible for North Carolina families.» Following a swell in early voting in 2018, state Republicans in North Carolina lost their veto-proof majorities in the House and the Senate. Many of these fights can be traced down to the competitive nature of the state, according to John Dinan, a professor in American politics at Wake Forest University in Winston Salem, North Carolina.

“You have a very competitive state in North Carolina. And so you had a Republican legislature that kind of was able to redraw the maps after the 2010 census and also make some changes to voting rules,” Dinan said. “It’s no surprise that [Democratic] groups have said, ‘Look, let’s see what we can do to push back against this and see if we can win some more seats in North Carolina,'» Dinan said.

The Democrats’ lawsuit also argues that the new law makes it more expensive to operate early voting sites, since counties no longer have the flexibility to determine when it is worthwhile to operate. According to voting rights experts, this led counties across the state to close early voting locations as a means to cut costs.

Jen Jones, the director of communications at Democracy NC, sees the new state court’s congressional maps ruling as largely positive. She is worried, though, that potential special elections would have to be called if constitutional maps aren’t redrawn in time.

“What the new congressional lawsuit means for us is a little bit of insecurity about how many primaries we’re going to have, what kinds of maps we are going to see and ultimately who is going to draw them,” Jones told ABC News. “It’s a victory, but it doesn’t acknowledge the practical realities for county boards that have to pay for these elections, and what that might mean for voting sites…that serve historically underrepresented populations, like primarily African-American voters.”

Allison Riggs, the chief counsel for voting rights at the Southern Coalition for Social justice, a nonprofit organization based in the state focused on issues of equity, is worried that special elections would be a cause for confusion and lead to lower turnout.

“I think that anytime you ask voters to do something extra, to go vote twice, you should try to avoid doing that. The way you try and avoid doing that is by the legislature, sort of on its own accord redrawing congressional districts now, instead of appealing or delaying in hopes that they, you know, can sort of eek something out of the confusion and uncertainty,” Riggs said.

A new bill that would permanently restore early Saturday voting made it through the state legislature in late October and was signed into law by Gov. Roy Cooper.

Republicans argue that their own bill, which was only passed through a veto override, expanded access to the ballots by mandating times that boards of elections must operate.

«Republicans in the General Assembly voted in 2018 to dramatically expand early voting hours and are finalizing legislation to send to Governor Cooper’s desk that will add early voting on the last Saturday before an election,” North Carolina GOP Chairman Michael Whatley said in a statement. “We would urge Governor Cooper to sign the legislation expanding early voting into law rather than supporting Democrats’ unnecessary lawsuit to advance their ‘Sue ‘til Blue’ agenda.”

Democrats count their new bill as a win and their lawsuit asks that counties have the freedom to determine when, and for how long, their early voting sites should be open and staffed.

The same judges who declared the state’s congressional map unconstitutional also struck down state legislative maps earlier this year on the grounds of partisan gerrymandering. The legislature was ordered to redraw the statewide maps and the court has approved them.

Because of that, Dinan says that he expects the legislature to be able to handle redrawing congressional districts, in a constitutional way, themselves.

These changes aren’t the first to come down the pike when it comes to access to the ballot box in North Carolina.

(MORE: Republican at center of North Carolina election fraud scandal will not run in new election)

In 2013, Republicans passed a sweeping law that shortened early voting by a week, created stricter photo ID requirements and eliminated same-day registration, among other things. 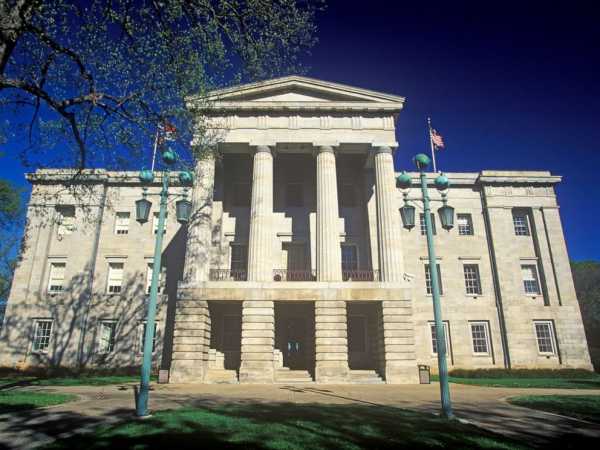 In this undated file photo, State Capitol in Raleigh, N.C., is shown.

In August 2016, that law was overturned by the 4th U.S. Circuit Court of Appeals for “discriminatory intent” which “target[ed] African American voters with almost surgical precision.” The law wasn’t changed before election day and early voting showed a decline in black turnout.

During the 2016 presidential election, there was a lower African-American turnout compared to 2012’s election. In 2012, 753,803 African Americans cast their ballots early in North Carolina, which dropped 8.7% to 699,153 in 2016, according to Michael McDonald, an associate professor at the University of Florida who specializes in American elections.

Ultimately, the state’s track record on voter disenfranchisement has been a back and forth jockey between Republicans and Democrats. For that reason, Democrats are seeing an opportunity to bring forward cases like these in an attempt to see more success in 2020, Dinan says.