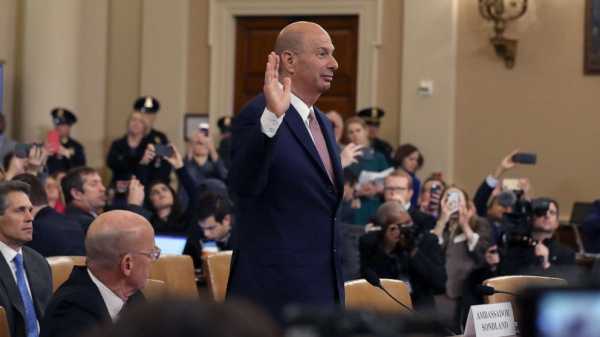 Gordon Sondland, U.S. ambassador to the European Union, was President Donald Trump’s handpicked dealmaker on Ukraine, according to his fellow impeachment witnesses. On Wednesday, he testified publicly for the first time under subpoena.

Sondland is considered a key witness in the House impeachment inquiry into Trump’s pressure campaign on Ukraine. Trump wanted Ukraine President Volodymyr Zelenskiy to announce an investigation that would have, in part, targeted the president’s 2020 political rival, former Vice President Joe Biden, and his son, Hunter, who had served on the board of the Ukrainian energy company Burisma. 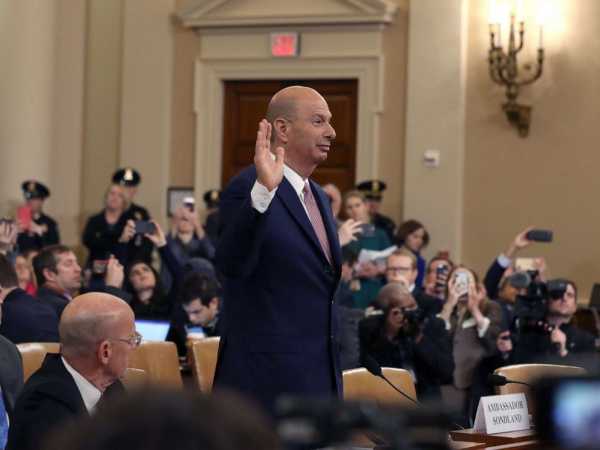 PHOTO:Gordon Sondland, the U.S ambassador to the European Union, is sworn in to testify before the House Intelligence Committee on Capitol Hill, Nov. 20, 2019 in Washington, D.C., as part of the public impeachment hearings.

Sondland confirmed a quid pro quo, which Trump has denied

Sondland testified that a White House summit between the two presidents sought by Ukraine was contingent upon Zelenskiy’s willingness to announce the investigations Trump wanted.

That direction came directly from Trump’s personal lawyer Rudy Giuliani, and after the president repeatedly told Sondland to «talk to Rudy,» he said.

«I know that members of this committee have frequently framed these complicated issues in the form of a simple question: Was there a ‘quid pro quo?’ As I testified previously, with regard to the requested White House call and White House meeting, the answer is yes,» he said.

By early September, Sondland said he made another connection — that nearly $400 million in U.S. aid was on the line, too. Sondland said Trump «never told them directly that the aid was conditioned» upon the investigations. When the Democratic counsel asked whether he made that connection based on the evidence adding up, Sondland said yes.

«The only thing we got directly from Guiliani was that Burisma and the 2016 elections were conditioned on the White House meeting,» he said. «The aid was my own personal, you know, guess based again on your analogy two plus two equals four.»

Then, on the sidelines of a diplomatic meeting in Warsaw on Sept. 1 with Vice President Mike Pence, Sondland said he told a top Ukrainian official that U.S. military aid «would likely not occur until Ukraine took some kind of action on the public statement that we had been discussing for many weeks.»

As he «understood it,» the Ukrainians only «had to announce the investigations, [Zelenskiy] didn’t actually have to do them,» Sondland said. 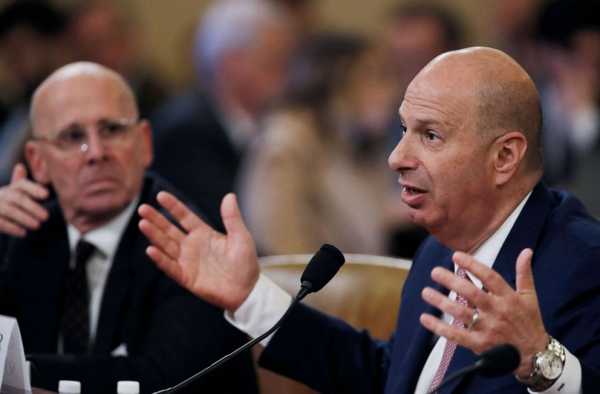 U.S. Ambassador to the European Union Gordon Sondland testifies before the House Intelligence Committee on Capitol Hill in Washington, D.C., Nov. 20, 2019, during a public impeachment hearing.

‘Everyone was in the loop’

Sondland said no one he talked to supported the hold on aid and that he personally shared his concerns of a «quid pro quo» with Republican Sen. Ron Johnson of Wisconsin, and Secretary of State Mike Pompeo. And at one point, Sondland said, he told Pence what was going on with regard to aid and investigations and the vice president «nodded.»

«Everyone was in the loop,» he said, speaking generally of the hold on military aid. «It was no secret.»

Sondland testified that in August, Pompeo knew he was working with Giuliani on a public statement they wanted Zelenskiy to announce in exchange for the White House meeting. And later, he said, Pompeo became aware of «the log jam» tied to the military aid.

When asked whether Pompeo «was aware of the connections that you were making between the investigation and the White house meeting and the security assistance,» Sondland simply replied «yes.’

When asked if Pompeo ever took issue, Sondland said «Not that I recall.»

After earlier Wednesday declining to respond to shouted questions about Sondland’s testimony, Pompeo later told reporters in Brussels he hadn’t had a chance to review Sondland’s testimony but he defended U.S. Ukraine policy under Trump. «I’m incredibly proud of what we’ve accomplished,» Pompeo said.

On Pence, Sondland said he recalled telling the vice president that military aid seemed to be tied to Zelenskiy’s willingness to announce an investigation and that Pence responded affirmatively.

«Again, I don’t recall any exchange or [if] he asked me any questions, I think it was sort of a duly noted,» Sondland said.

«Well, he didn’t say, ‘Gordon, what are you talking about?'» Goldman asked.

«No, he did not,» Sondland responded.

Pence’s chief of staff Marc Short said the vice president «never had a conversation with Gordon Sondland about investigating the Bidens, Burisma or the conditional release of financial aid to Ukraine based upon potential investigations.»

Republicans got some traction on a key point

While Sondland was clear that a meeting between the two presidents was on the line, he said no one — including Trump — told him that the $400 military aid was indeed part of the deal.

Withholding money from a close U.S. ally fighting Russia is a much more significant allegation in the impeachment inquiry. Congress already approved that security assistance and the Pentagon had determined that Ukraine had met the appropriate anti-corruption benchmarks in order to receive the money.

But Republicans were able to nail down that Sondland never got that order from the president.

GOP Rep. Mike Turner of Ohio asked, «So you really have no testimony today that ties President Trump to a scheme to withhold aid from Ukraine in exchange for these investigations?»

Sondland responded, «Other than my own presumptions.»

«Which is nothing,» Turner responded, calling it «hearsay.»

Another key argument by Republicans in defense of Trump is that the president declared «no quid pro quo» in a private Sept. 9 call as described by Sondland.

But at that point, the White House was already aware of the Aug. 12 whistleblower complaint alleging exactly that. The complaint had been sent to an internal watchdog within the intelligence community, and the CIA and Justice Department alerted the White House.

In fact, on the same day of the Sondland-Trump phone call, the White House knew that Congress had been alerted to the whistleblower’s allegations, according to the House Intelligence Committee. Democrats also announced that day it was launching an inquiry into Trump’s handling of Ukraine.

So by the time Sondland called the president on Sept. 9, Trump likely knew he was being accused of a quid pro quo. And when Sondland asks an open-ended question — «What do you want from Ukraine?» –Trump responded using that phrase.

«I want nothing. I want no quid pro quo,» Trump told Sondland, according to the ambassador’s testimony. 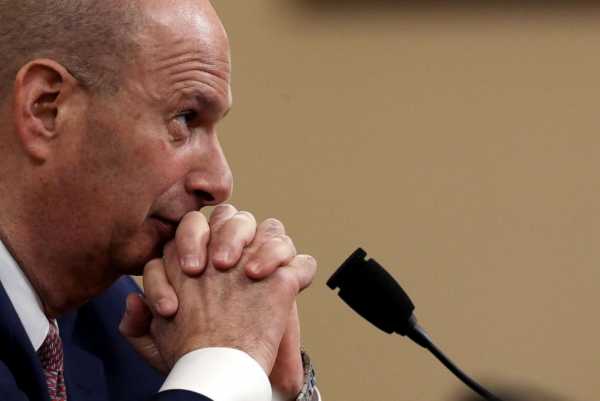 Gordon Sondland, the U.S ambassador to the European Union, testifies during a public impeachment hearing before the House Intelligence Committee on Capitol Hill, Nov.20, 2019 in Washington, D.C.

Sondland also confirmed testimony by another State Department staffer, David Holmes, who has said he overheard Trump ask Sondland in a private cellphone call in a restaurant in Kyiv, Ukraine, about the status of the investigations and that Sondland responded that Zelenskiy will do what he wants because he, «loves your ass.»

«Sounds like something I would say,» Sondland said when asked about it.

He added, «that’s how President Trump and I communicate. A lot of four letter words. In this case, three letters.»

Sondland said he doesn’t recall any mention of Biden on the call, although he does remember discussion on Burisma.

The ambassador said he also couldn’t recall telling the State Department official, after hanging up with the president, that Trump doesn’t care about Ukraine. But according to Holmes’ closed-door testimony, Sondland said Trump cares about «only big stuff that matters to him, like this Biden investigation that Giuliani is pushing.»

Sondland said he spoke to the president on Trump’s terms, not his. And that Trump «was aware that it was an open line.»

Republicans also have argued that Trump can’t be accused of a quid pro quo in his July 25 phone call with Ukraine’s president because Kyiv wasn’t aware the $400 military aid was on hold at the time.

But one Pentagon official, Laura Cooper, testified late Wednesday that her staff told her they were contacted by Ukrainian embassy officials about the status of the Ukraine aid that same day.

That testimony came in an update to Cooper’s previous closed-door testimony.

«I would say specifically the Ukrainian embassy staff asked, ‘what is going on with Ukrainian security assistance?'» Cooper told Chairman Adam Schiff.