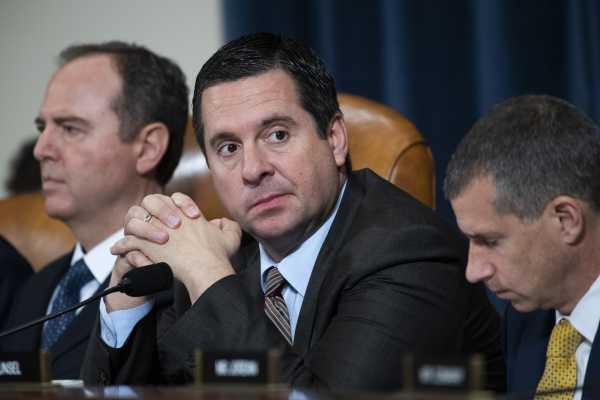 On two separate occasions during Tuesday’s impeachment hearings, House Intelligence Committee ranking member Devin Nunes (R-CA) derisively referred to the impeachment inquiry as a “drug deal” — a turn of phrase meant to depict Democrats as being up to something illicit.

The comment is part of Republicans’ broader push to portray the entire impeachment inquiry as a partisan witch hunt. But while Nunes may think that by saying this he’s owning the libs, he’s actually owning himself.

“Drug deal,” if you recall, was the memorable turn of phrase then-National Security Adviser John Bolton originally used to describe the efforts of US ambassador to the EU Gordon Sondland and Rudy Giuliani to leverage the Ukrainian government into doing political favors for Trump.

My colleague Alex Ward detailed the backdrop of Bolton’s “drug dealer” remark late last month, when news broke that Bolton was in talks to testify before impeachment investigators. And suffice it to say the context doesn’t reflect positively on Trump’s Ukraine policy:

So by repeatedly bringing up the “drug deal,” Nunes is in effect reminding people that even top Trump administration officials had concerns about the shadow Ukraine policy that was being run by Giuliani and Sondland. It’s a bizarre tactic for one of Trump’s staunchest defenders in Congress.

Then again, other parts of Nunes’s performance during Tuesday’s hearing indicated that his heart isn’t really in it.

Nunes’s performance on Tuesday may shed some light on why Trump-defended attack dog Jim Jordan (R-OH) was recently added to the intelligence committee, with the Los Angeles Times reporting at the time that “some Republicans have privately questioned whether Nunes is prepared for the role” of leading the hearings.

But, in fairness, it’s hard to defend the nearly indefensible. And shortly before Nunes’s second “drug deal” remark, one of the Republicans’ witnesses — Tim Morrison, the former top National Security Council official for Russia and European affair — outlined more clearly than any other witness that the Trump administration held up military aid to Ukraine as part of an effort to strong-arm the Ukraine government into publicly opening investigations of the Bidens and of conspiracy theories aimed at showing that Russia did not in fact interfere in the 2016 election.