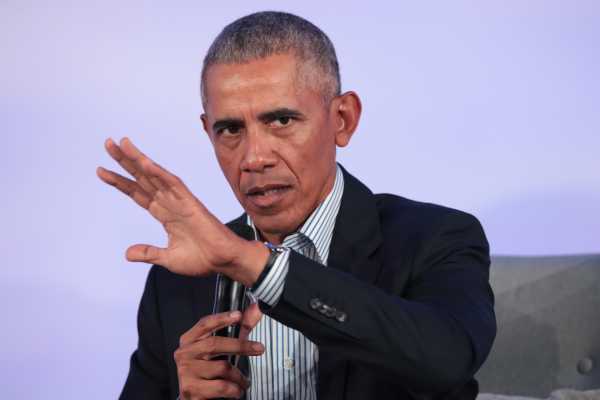 Former President Barack Obama has studiously avoided commenting on the Democratic presidential primary, but on Friday, before a crowd of wealthy liberal donors in Washington, he finally weighed in. His message? Don’t move too far to the left.

“This is still a country that is less revolutionary than it is interested in improvement,” he said at the annual meeting of the Democracy Alliance. “The average American doesn’t think we have to completely tear down the system and remake it.”

Obama’s remarks come at a time when the primary’s central dynamic is a clash over whether the best way forward is for the party is to continue along a center-left path, most prominently represented by former Vice President Joe Biden and South Bend, Indiana, Mayor Pete Buttigieg or to chart a more left-wing course, as Sens. Elizabeth Warren and Bernie Sanders have argued.

In what seemed a rebuke of Warren and Sanders’ stances, Obama, who is still held in exceptionally high regard by Democratic voters, spent considerable time during his speech counseling against adopting left-wing populism as a party platform.

“Voters, including Democrats, are not driven by the same views that are reflected on certain left-leaning Twitter feeds, or the activist wing of our party,” he said. “And that’s not a criticism to the activist wing. Their job is to poke and prod and text and inspire and motivate. But the candidate’s job, whoever that ends up being, is to get elected.”

Obama pointedly didn’t mention any candidates by name, but his speech decidedly argued for the moderate approach.

In particular, he argued against the strategy that democratic socialist politicians like Sanders and Rep. Alexandria Ocasio-Cortez (D-NY) have employed in trying to mobilize voters by building enthusiasm over extremely ambitious policy proposals and questioning accepted wisdom on voter values, saying:

Just as he was careful not to call out any candidates by name, Obama didn’t mention a specific policy proposal, but he did identify health care and immigration as issues where candidates might be diverging too sharply from public opinion.

Progressives in the 2020 race have, of course, touted their Medicare-for-all proposals, and some, like former Obama official Julián Castro, have called for major changes to immigration policy, including the decriminalization of illegal entry. It is policies like these, Obama suggested, that go too far.

Of late, Obama has often advocated for a middle-of-the-road stance

While his Democracy Alliance comments mark the first time the former president has explicitly weighed in on the 2020 race, he has made other comments and gestures that hint at more moderate views on today’s political climate.

During a discussion about youth activism at an Obama Foundation summit in October, he critiqued call out culture and overzealous activism as dubious strategies for changing the world.

“This idea of purity and you’re never compromised and you’re always politically ‘woke’ and all that stuff,” Obama said. “You should get over that quickly.”

“The world is messy; there are ambiguities,” he added. “People who do really good stuff have flaws. People who you are fighting may love their kids, and share certain things with you.”

Obama has warned about this “idea of purity” before, cautioning an audience in April about “creating what’s called a ‘circular firing squad’ where you start shooting at your allies because one of them is straying from purity on the issues.”

At the same event he said, “One of the things I do worry about sometimes among progressives in the United States … is a certain kind of rigidity where we say, ‘Oh, I’m sorry, this is how it’s going to be.’”

Comments such as these might seem to be at odds with the former president’s calls for “new blood” in politics — particularly given that the most visible members of the next generation of Democrats, like Ocasio-Cortez or Rep. Ayanna Pressley, are unabashedly progressive and support the sort of bold policy changes Obama warned against Friday.

But he has at times signaled encouragement for younger politicians, like when he met with former congressman Beto O’Rourke and spoke very highly of him in 2018, helping fuel speculation that O’Rourke might be a viable 2020 contender. While Beto is ideologically mercurial, he was widely perceived as more moderate than the Warren-Sanders wing of the party before dropping out of the race earlier in November.

Nevertheless, the question of whether to focus on winning over moderate voters or building enthusiasm among more progressive and anti-establishment voters is a huge topic of (often rancorous) debate among Democrats as 2020 approaches, and is one that will be on display during the upcoming November Democratic presidential debate.

Obama is making it clear that he thinks the former should be the priority.