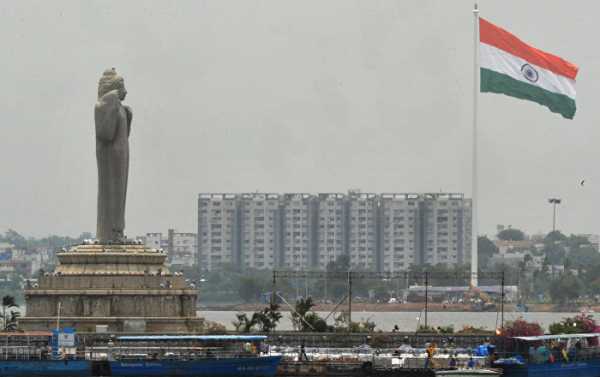 New Delhi (Sputnik): In a gruesome incident, a speeding Volkswagen Polo fell from an overpass in the southern Indian city of Hyderabad that killed a woman and left six others injured.

The victim was waiting for a car when the speeding Polo fell on her. This is the second such incident on the newly constructed biodiversity overpass since its inauguration around three weeks ago.

The woman killed in this incident has been identified as Satyaveni (40) who was standing on the roadside under the overpass, when the speeding car fell and hit her. Six others including the victim’s daughter who was also next to her during the incident have sustained injuries.

Videos from the aftermath of the accident, show a huge crowd gathered around a car that has been smashed from the fall, as a woman is heard screaming in pain.

​According to police officials, the driver of the car couldn’t negotiate the curve on the overpass, lost control, and his car went over the side, adding that it could be a case of speeding.

A local urban body in Hyderabad has announced ex-gratia of $7,000 (INR 5 lakhs) to the relatives of the woman who died in the accident and medical assistance to the victims who received injuries. The overpass has also been closed.

This is the second incident on the new overpass in the recent past. Earlier this month, two youngsters fell off the highway and fatally landed on the road below when a speeding car driven by a techie under the influence of alcohol hit their bike.