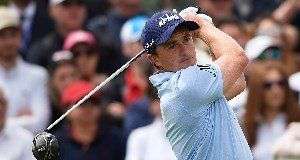 South Africa’s Louis Oosthuizen battled through the pain barrier to take a three-shot lead after the opening round of the Nedbank Golf Challenge in Sun City.

The 2010 Open champion shot a flawless nine-under par 63 at Gary Player Country Club to put him clear of Belgian Thomas Detry, with Italy’s Guido Migliozzi a further stroke back.

South Africans Ernie Els and Zander Lombard are tied for third at four under, alongside defending champion Lee Westwood.

Oosthuizen had pulled out of the pro-am on Wednesday because of problems brought on by kidney stones, which saw him seek hospital treatment.

The 37-year-old, though, looked to be back to full health as he picked up four birdies on the front nine, holing from 18 feet at the sixth.

Three more in succession followed the turn, including sinking a 15-foot putt on the par-four 11th.

Things, though, could have gone so much differently.

“Yesterday I spent a bit of time in the hospital and crawling around my hotel room with kidney stones, at 3am this morning, on my knees next to the toilet, which is not a great spot,” Oosthuizen told the European Tour.

“I didn’t think I was going to tee off early this morning. I thought it was going to be a horrible week for me. Somehow it got better a lot faster than what I expected… it sort of eased in like at 6 or 7am.

“I went up to the range, hit a few shots and didn’t really bother me.

“It was more the walking fast that got it, so I just slowed everything down.

“I hit it nicely. I swung it really good. There was no big hits, I always went for the smoother club.

“Today was just one of those rounds where I think everything just fell into place.”

Detry, meanwhile, recovered from a six on his second hole to turn at two under, before four birdies in the next five moved him right into contention.

Migliozzi had made four birdies in a row at the seventh as he led by two at the turn. However, dropped shots on the 12th, 15th and penultimate holes proved costly.

Els, three times winner of the tournament, shot a bogey free 68, making a birdie on the 17th.

“I didn’t quite expect that,” said the 50-year-old, who is set to captain the international team at next month’s Presidents Cup.

“I haven’t played too much golf recently. I really came here with a plan to try and get a swing going, which I kind of did.

“I just went on memory, going around the golf course where I used to hit the ball. Today was a good day.”

England’s Matt Fitzpatrick, who is trying to maintain his record of winning every year on the European Tour since graduating from Qualifying School in 2014, dropped two shots over the closing three holes to sit at one under, alongside Race to Dubai leader Bernd Wiesberger and Ryder Cup captain Pádraig Harrington.

Tommy Fleetwood, also chasing a first victory of the year, is in a group at three under.