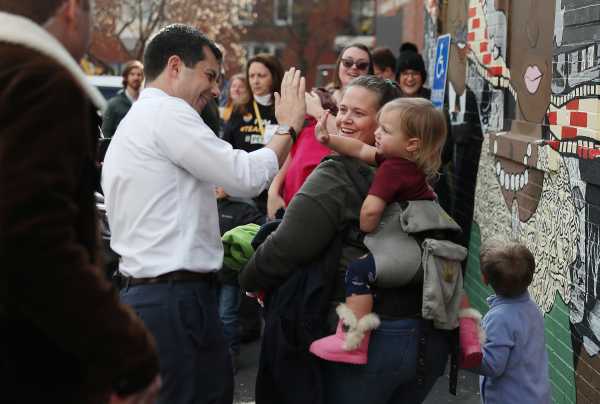 The latest poll in Iowa shows South Bend, Indiana Mayor Pete Buttigieg with a resounding lead in the Democratic presidential primary for the first time.

A November telephone poll conducted by noted Iowa pollster J. Ann Selzer for CNN and the Des Moines Register saw Buttigieg soar to 25 percent support in the state, with Sen. Elizabeth Warren in a distant second place at 16 percent. Warren was found to be essentially neck-and-neck with former Vice President Joe Biden and Sen. Bernie Sanders, who each received 15 percent support. The gap between these three candidates fell within the 4.4 percentage point margin of error, one which Buttigieg easily cleared.

For Buttigieg, the results build on the support he saw in an October Iowa poll from Suffolk University/USA Today, which showed the mayor in third place with 13 percent support, trailing behind Biden (18 percent), and Warren (17 percent) at the time of the poll, which was taken after the fourth Democratic presidential debate.

Selzer noted that this is the first time voters have seen Buttigieg as the “stand-alone front-runner.”

“There have been four candidates that have sort of jostled around in a pack together, but he has a sizable lead over the nearest contender — 9 points,” she told the Register. “So this is a new status for him.”

Sen. Amy Klobuchar led the middle of the pack with 6 percent support, followed by Sens. Cory Booker and Kamala Harris; Rep. Tulsi Gabbard; and businessmen Tom Steyer and Andrew Yang with 3 percent each.

Buttigieg’s momentum comes as the 37-year-old mayor has invested heavily in a robust ground operation in the first-in-the-nation state. Buttigieg received roaring support during a November 1 speech at the annual Liberty and Justice gala, formerly known as the Jefferson-Jackson Dinner, but even before the big event, Buttigieg was rising in the polls.

A New York Times/Siena College poll released the morning of the gala showed Buttigieg edging out Biden for third place, with 18 percent, ahead of Biden’s 17 percent (and both candidates behind Warren’s 22 percent and Sanders’s 19 percent).

With many voters still weighing candidates, the race could change significantly before the caucuses

“That’s extremely encouraging, obviously,” Buttigieg said of the results at the California Democratic Convention in Long Beach, California, Saturday night. “We have felt a lot of momentum on the ground … At the same time, there’s a long way to go, and there are a lot of states in this process.”

Buttigieg is right that the race for Iowa — let alone the Democratic nomination — is far from over. The Iowa caucuses are still two-and-a-half months away, on February 3, and the top four spots have been in constant flux between Buttigieg, Warren, Biden, and Sanders.

And the latest poll results suggest voters have not yet settled on their preferred candidates. Notably, 62 percent of respondents indicated that they could be persuaded to support another candidate as their first choice. That number is down only slightly from Selzer’s September Iowa poll, which found 63 percent of Iowa voters open to supporting a different candidate.

While Iowa’s Democratic voters are not exactly sure who they want as their party’s nominee, they know one thing for sure: They want someone who can beat President Donald Trump. The poll found 63 percent of respondents thought it was more important to nominate someone who has a “strong chance” of beating Trump, as opposed to the 32 percent who said it’s more important to have someone who shares their “positions on major issues.”

When asked who they believed had the best chance of defeating Trump in the general election, Biden topped the field. He was the only candidate who more than 50 percent of respondents said they were “almost certain” or “fairly confident” would beat Trump — 52 percent of respondents felt he had a good chance of beating the president. Warren and Buttigieg were not far behind, with 46 percent saying they were fairly confident or almost certain either could unseat Trump; Sanders trailed in this question, with 40 percent believing in his chances.

The latest poll indicates Buttigieg is a contender to be taken seriously. However, with more than two months to go before the caucuses, reversals of fortunes remain possible. Or as Selzer put it, Buttigieg “has more convincing to do or someone else will rise up.”