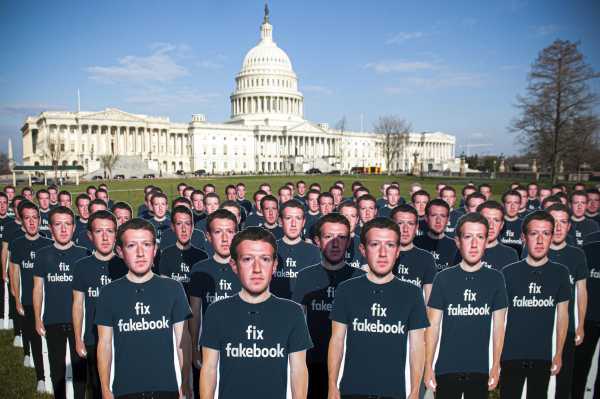 Poll: Two-thirds of Americans want to break up companies like Amazon and Google

Turns out breaking up Big Tech is super popular.

Share
All sharing options for:
Poll: Two-thirds of Americans want to break up companies like Amazon and Google

Americans are pretty on board with breaking up Big Tech, especially if it means companies such as Amazon and Google stop showing them search results they make money off of first.

Nearly two-thirds of Americans would support breaking up tech firms by undoing recent mergers, such as Facebook’s acquisition of Instagram, if it means ensuring more competition in the future.

Another tech company issue appears to strike a chord with people even more: Almost seven in 10 Americans say it’s a good idea to break up big tech companies when the content they’re showing people is ranked depending on whether the company is making money off of it or not. Basically, when you search for a suitcase to buy on Amazon, it might show you options from its proprietary AmazonBasics line instead of from a company it doesn’t own.

That’s according to polling from progressive think tank Data for Progress in partnership with YouGov Blue shared exclusively with Vox.

And the results hold across most age groups, education levels, demographics, and political ideologies. 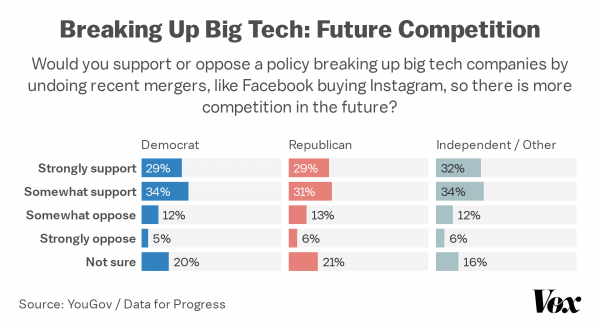 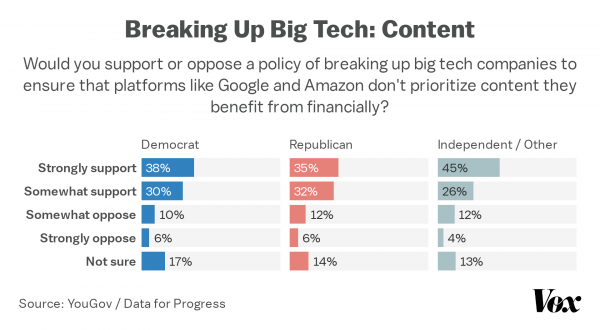 Across political party identification, Americans are pretty consistent about breaking up Big Tech. The poll shows that on the more extreme ends of both the left and the right, there is more enthusiasm on the matter. 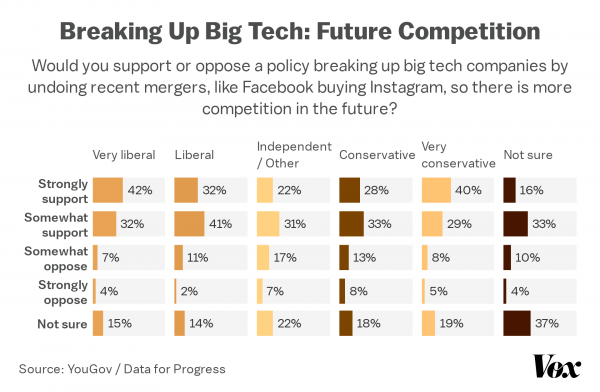 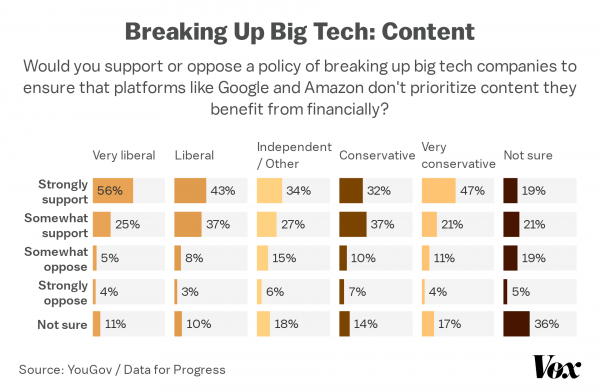 This isn’t particularly surprising — politicians on both sides of the aisle have been ramping up their scrutiny of Big Tech recently. But it’s not entirely clear what we (or many of those lawmakers) really mean when we talk about breaking up tech companies. How to address technology companies — not only in terms of antitrust but also on items such as security and data privacy — is in its policy infancy.

The poll was conducted from September 11 to September 13 and is based on 1,280 interviews conducted by YouGov online of self-identified voters.

Big Tech is a popular target for everybody right now

Tech companies have come under heavy scrutiny, seemingly from every angle, as of late.

In July, the Department of Justice announced a sweeping antitrust review that, while it didn’t name names, made clear that Facebook, Google, and Amazon were on the menu. The department said it would look into “whether and how market-leading online platforms have achieved market power and are engaging in practices that have reduced competition, stifled innovation, or otherwise harmed consumers.”

The FTC is also investigating Facebook over antitrust matters. This summer, it hit Facebook with a $5 billion fine for violating user privacy as part of the Cambridge Analytica scandal. And earlier this month, it fined Google’s YouTube $170 million over violating children’s privacy laws. (To be sure, these fines aren’t particularly effective in the grand scheme of how much money these companies make.)

And it’s not just the federal executive branch. Politicians and government officials from both parties are upping their criticism of tech companies.

On the left, Sen. Elizabeth Warren (D-MA) has proposed breaking up Facebook, Google, Amazon, and Apple. Sen. Bernie Sanders (I-VT) has clashed with Amazon on multiple occasions, criticized Facebook and Google for destroying local media, and said he will “absolutely” look into breaking up tech companies. Sen. Amy Klobuchar has a long history of scrutinizing technology companies.

On the right, Sen. Josh Hawley (R-MO) has postured himself as an anti-tech crusader. He has proposed multiple pieces of legislation on that front, including one bill that would take away protections for companies regarding the content users post on their platforms and another that would limit time on social media platforms to 30 minutes a day. Sen. Ted Cruz (R-TX) and other Republicans continually lambaste Big Tech over alleged bias.

At the state level, attorneys general across the country from both parties have announced investigations into Facebook and Google.

Vox’s Matt Yglesias earlier this year did a deep dive into the wave of calls to break up big tech comanies and why this is happening right now. His findings: Antitrust regulators have been asleep at the wheel and let tech companies “move fast and break things” perhaps too much. That’s let them do harm to suppliers and competitors. Facebook bought Instagram and WhatsApp instead of having to compete with them. Google ranks its restaurant review results over Yelp’s. Per Yglesias:

It appears as though the backlash against big tech companies isn’t going anywhere — and Americans are getting on board with the idea that something needs to be done.