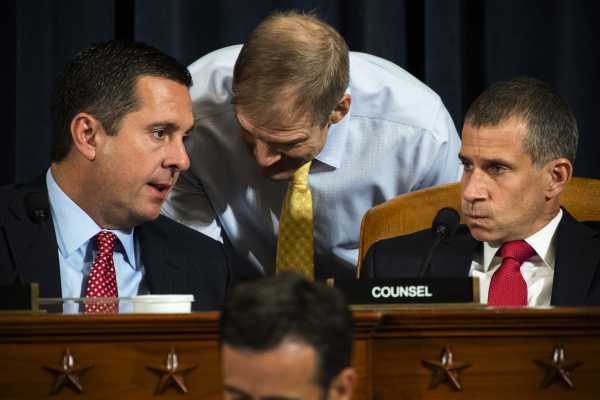 On the first day of public impeachment inquiry hearings, House Republicans stuck closely to a strategy they formulated earlier this week: make it seem like President Donald Trump did nothing wrong.

During the hearing, which featured the top US diplomat in Ukraine William Taylor and State Department Deputy Assistant Secretary George Kent, Republicans asked questions and delivered soliloquies that sought to reframe Trump’s attempts to pressure Ukraine into launching investigations into his rivals as noble anti-corruption efforts that did no harm to Ukraine’s war effort or the US-Ukraine relationship.

It was a strategy that led to more than a few moments of absurdity and raised eyebrows (including from the witnesses) as lawmakers like Rep. Jim Jordan pushed right-wing conspiracy theories, ignored evidence, and distorted reality.

Even the top Republican in the hearing got in on this, as Vox’s Andrew Prokop has noted: “Rep. Devin Nunes, in his opening statement, went on a grand tour of Fox News rabbit holes from DNC consultant Alexandra Chalupa to the Steele Dossier to prank callers who offered Schiff “nude pictures” of Trump two years ago.”

That made the difference all the more stark when Rep. Will Hurd, a lawmaker who has often refused to adopt Republican talking points on the Ukraine scandal (for instance, defending the anonymity of the whistleblower while his colleagues and party leader called for him to be unmasked), took his turn. 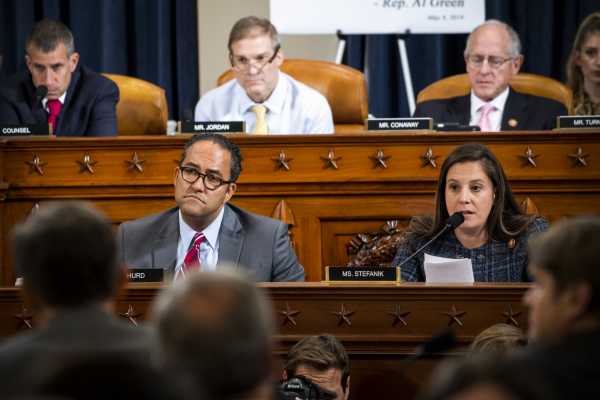 Hurd is not seeking reelection and is thus arguably freed from the need to create moments that can be included in future campaign ads. He offered a more pointed, cogent defense of the president than many of his colleagues who attempted similar ones.

Republican talking points don’t make a lot of sense. But Hurd’s was the clearest version of the GOP’s defense strategy.

Ahead of the hearings, a Republican memo suggested House Republicans work to highlight four claims in their questioning during the hearing:

These points were pressed during Wednesday’s hearing, despite the fact that doing so made little sense. That’s because establishing them as fact relies on ignoring sworn witness testimony, the White House’s own record of the July 25 call, the realities of a power imbalance in the US-Ukraine relationship, and the basic fact that the impeachment inquiry does not seek to investigate whether Ukraine got its aid but whether Trump tried to improperly use the power of his office to pressure a foreign power to meddle in a US election. 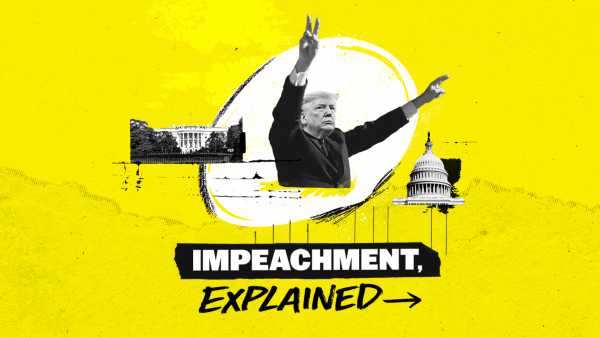 Hurd built on these points — without relying on outlandish conspiracy theories — and presented a counter-narrative: Ukraine was a corrupt nation with a new president, and Trump wasn’t sure either could be trusted.

This explanation for the delayed aid doesn’t seem to be borne out by the evidence, though: Trump’s own officials, including acting Chief of Staff Mick Mulvaney and Ambassador to the EU Gordon Sondland, have said it was for other reasons, involving either Democrats or the Bidens. But, at the very least, Hurd’s strategy was a slightly more evolved one.

Hurd began his questioning by asking if Ukraine received military aid in 2017, Trump’s first year in office. Taylor and Kent said the country did, that the same is true of 2018, and, following the delay, will be true of 2019.

“My point: We have been supporting Ukrainians under this administration in order to help them kick out the Russians who invaded their country,” Hurd said following these questions.

In making this point, Hurd seemed to suggest that Trump is a staunch ally of Ukraine and that the disbursement of aid was inevitable, a subtler and more evidence-based way of highlighting a point his colleagues tried to make: that because the Ukrainians received the withheld aid before launching any investigations, Trump can’t be accused of having done anything wrong.

Or as Rep. Elise Stefanik (R-NY) put it: “For the millions of Americans viewing today, the two most important facts are the following: Number one, Ukraine received the aid. Number two, there was, in fact, no investigation into Biden.”

Rep. Brad Wenstrup (R-OH) tried to underscore this as well but got slightly lost in an Obama conspiracy theory: “The strong support came with this administration, not the Obama administration, and maybe now we understand what President Obama meant when he told Russian President Medvedev he’d have more flexibility after his election. Maybe that flexibility was to deny lethal aid to the Ukraine, allowing Russia to March right in and kill Ukrainians.”

Conspiracy theories aside, this reading of events, as Democratic Rep. Raja Krishnamoorthi said during the hearing, ignores the fact that the aid was released after the White House became aware of a whistleblower’s complaint regarding the president’s interactions with Ukraine, and after lawmakers began asking the questions that eventually led to the impeachment inquiry.

As Democratic Rep. Joaquin Castro tried to point out, attempted crimes — including bribery and coercion — are still crimes.

Vox’s Andrew Prokop joins this episode of Vox’s daily explainer podcast to share the most important takeaways from the historic public hearing, including Taylor’s new information reveal and Democrats trying a new format.

Apple’s success in China means it has to censor apps