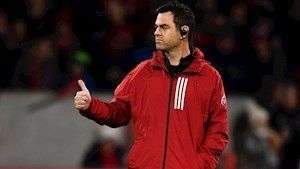 Saracens overwhelmed the Ospreys 44-3 but their first home match since the salary cap scandal broke was played amid a subdued atmosphere at Allianz Park.

It was a return to winning ways for the Champions Cup holders after they launched their defence with a frustrating defeat at Racing 92 and their performance was a vast improvement on the opener six days earlier.

Elliot Daly’ Saracens debut was full of creative devilry and the England full-back, playing his first match since the World Cup final on November 2, set-up two tries for lightning-fast wing Rotimi Segun.England fullback Elliot Daly talks to team-mates during his Saracens debut in the Heineken Champions Cup against Ospreys.

Singleton went over for Saracens’ first try and was eventually replaced by Jamie George, while captain Brad Barritt made a successful comeback after six weeks out because of concussion.

The Ospreys were missing their Wales stars and Mark McCall’s men ruthlessly dismantled weakened opposition who fought manfully but lacked the firepower to cause any real damage.

Saracens have now won two of their three matches since being docked 35 points in the Gallager Premiership and fined £5.36million for breaching salary cap regulations and this victory keeps them in the hunt for a European quarter-final.

Daly’s first meaningful act in a Saracens jersey was to land a long-range penalty that sailed well beyond the target and although Ospreys had made a solid start, they fell further behind when Manu Vunipola was also successful from the kicking tee.Prop Mako Vunipola, one of Saracens’ returning England players, pictured during the Heineken Champions Cup win over Ospreys.

And another of Jones’ World Cup squad was among the points when Singleton was driven over from an attacking line-out.

James Hook landed a penalty for Ospreys to eat into the deficit but their response was short lived as a scrum move continued by an instinctive volley from half-back Tom Whiteley found Daly who drew the last defender to send Segun screaming over.

A dummy and charge from Mako Vunipola sent the Ospreys backwards and when play swept to the opposite wing Segun was present to supply Alex Lewington with the scoring pass.

The outstanding Daly combined with Segun once against for the try that secured the bonus point as he slipped the ball out of the tackle for the jet heeled wing to score in the right corner.

The Ospreys continued to wilt before Saracens’ power and when they were shoved backwards at a five-metre scrum they were breached for a fifth time with referee Mathieu Raynal awarding a penalty try.

And when waves of black shirts renewed the attack, it was replacement prop Richard Barrington who barrelled over to complete the rout.