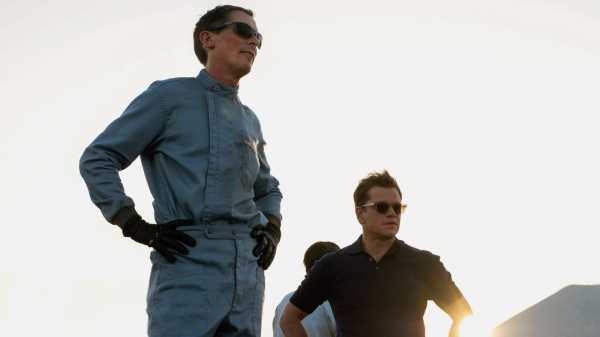 James Mangold’s new film, “Ford v Ferrari,” based on a true story, is about the restoration of a hidden hero—a race-car driver—to the prominence that history has denied him. It’s a superhero-movie version of a real-life drama—a sort of buddy movie that’s filled with high-speed, high-stakes, high-risk action. It develops its drama on an international scale and inscribes it on the world-striding map of industrial politics of a historic scope, while remaining family-friendly and sentimental about domestic life. It’s also sentimental about the time in which it’s set (1959-1967), and about the hard-nosed, old-school man’s world on which it’s centered—which is to say that it’s a prime-grade Oscar candidate, if the pundits are to be trusted. In the tailoring of its story for untroubled consumption, it stumbles as much with its omissions as with its excesses.

The movie starts in 1959, in Los Angeles, where a race-car driver, Carroll Shelby (Matt Damon), is forced to quit racing, for medical reasons. In the early sixties, he has started a new life, designing racing cars and selling souped-up stock cars. He works closely with a talented but irascible English driver named Ken Miles (Christian Bale), who drives Shelby’s cars in local races. Meanwhile, in Michigan, the Ford Motor Company, led by Henry Ford II (Tracy Letts), is lagging far behind other automakers in sales. Ford’s marketing director, Lee Iacocca (Jon Bernthal), has a plan: to make Ford cars appear hip and desirable, he recommends that the company create a car that will triumph at the twenty-four-hour Le Mans race, which Ferrari consistently wins.

Iacocca gets Ford’s approval and hires Shelby, a skeptical outsider who is given limitless resources to design and build such a car—in ninety days—in a frenzy of collective urgency akin to a virtual Manhattan Project of auto racing. Shelby takes for granted that Ken, a brilliant technician who collaborates with him in the design of the vehicle, will drive it at Le Mans. But an executive toady, Leo Beebe (Josh Lucas), fears that Ken is a loose cannon who will lead to a public-relations disaster, and he orders Shelby to replace him. It’s hardly a spoiler to say that, in the end, Shelby outmaneuvers the suits and Ken drives, and does so heroically, but not without a melancholic beat resulting from the culture clash.

Through another lens, the story of “Ford v Ferrari” can be viewed as that of an independent filmmaker brought in by a studio to work on a big-budget franchise film. Shelby, with his amiable, shit-kicking manner and his suave bravado, threads the corporate needle of assertiveness and compromise. After the race-car project suffers a humiliating public failure, he is summoned to the Ford offices, in Dearborn, Michigan, for a high-stakes meeting with Ford and other executives. What Shelby does during the meeting is, in effect, hold up a mirror to the making of studio movies—including “Ford v Ferrari.” He explains that bureaucratic structure is the obstacle to the victory that the executives seek: “You can’t win a race by committee,” he says, and asserts that what they’ve accomplished so far is actually a success, because Enzo Ferrari saw the quality of Shelby’s car and “He’s scared to death that you’re gonna start trusting me. You’re welcome.” Here is the automotive auteur in action.

Later, Shelby is again confronted by Beebe, whose mealy-mouthed bureaucratic jargon and weaselly chicanery inflects the entire drama. But Shelby outpaces him by taking Ford for a friendly ride in the race car that he’s been financing. Expecting an enjoyable jaunt, Ford instead gets the ride of his life: Shelby cuts loose on the test track, reaching the high speeds and precarious turns that simulate an actual race, scaring the boss out of his wits. From the sidelines, Shelby’s right-hand mechanic, Phil Remington (played, in a warm and wise supporting turn, by Ray McKinnon), tells an onlooker, “The uninitiated have a tendency to soil themselves.” When the car stops, Ford is blubbering uncontrollably and admits, “I had no idea.” As a result of this trick (and avoiding spoilers), Shelby is allowed to rehire Ken—or, rather, Francis Ford Coppola is allowed by the studio to hire Al Pacino rather than Ryan O’Neal or Robert Redford. What an actor goes through onscreen when the camera is rolling—the studio boss has no idea.

The life of the Miles family checks off the essential boxes for the sentimental connection of family and work that’s found in family movies: headstrong father, possessed of a pioneering obsession; a mother and wife (Molly, played by Caitriona Balfe) who is deeply devoted to him and shares his passion for fast cars (teasingly affirming that she loves their “vibration”) but has her feet on the ground, providing the tether, the reality principle, that constrains him; and a son who takes a deep interest in his father’s exploits. Indeed, Ken takes his son along to the track and lovingly passes along his practical and philosophical racing sense. Ken may be a loose cannon among drivers, but he’s as tightly settled at home as a valve cover in a gasket. Molly is the gasket; she’s rendered as a stereotype. She forced him to stop racing when he lost his garage to the I.R.S., and, when he sneaks around to join Shelby in the new venture, she confronts him about it—with yet another stereotype of badassery—by driving on streets at top speed to extract his confession.

Yet the big romance in the movie is bromance, and Mangold conjures it with a touch that’s reminiscent of the rowdy friendships found in films by Howard Hawks and John Ford. The emotional connection between Shelby and Ken is also a professional one, a seemingly telepathic bond that connects their instincts at the race track, akin to the on-set telepathy between Martin Scorsese and Leonardo DiCaprio that’s seen in Jonas Mekas’s documentary about the making of “The Departed.” What’s more, the bromance of “Ford v Ferrari” has a physical side. To patch up a rough spot in their friendship, Shelby shows up at Ken’s home and finds him carrying bags of groceries. Ken punches him in the nose, and Shelby tackles him, and the two men fight—under the amused gaze of Molly and a small crowd of passersby—until, exhausted from their quasi-erotic tangle, they lie side by side on the ground, as if postcoitally. It’s the movie’s closest suggestion of physical love, and it also gives rise to its best moment of deftly dramatic comedy: while the two men wrestle amid the groceries scattered on the ground, Shelby grabs a can with which to hit Ken but quickly puts it down, instead grabbing a soft loaf of bread and hitting him with it innocuously.

If Ken’s domestic life is rendered in roses with a few thorns still attached, Shelby’s—and this is the key weakness of the film—isn’t rendered at all. He’s seen briefly, early on, living alone in a messy trailer, and then isn’t seen at home again, nor is he seen to have any family life or romantic relationships. The elision of Shelby’s private life is a sleight of hand that obscures, above all, the complexity of life—it suggests a sheer unwillingness to contend with facts that don’t easily fit into a sentimental schema. The real Shelby was married seven times, and two or three of those marriages overlapped with the eight-year span covered in “Ford v Ferrari,” and extramarital affairs appear to have been involved, too. To place details of Shelby’s complicated life in the movie would be to offer a hero whose characteristics stand in contrast to the sanitized image of Hollywood heroes (even flawed ones) in family-oriented movies.

The racing is also sanitized. There’s plenty of footage set on the Le Mans track and others throughout the film, but they’re all characterized by the tricks of the cinematographic and special-effects trades, combined with the simplistic display of basic emotions. The scenes of speed feature a rapid montage of a varied but narrow array of imagery, including brief views of the track from the front of the car, views of the roadbed from way down at the front bumper, side views of cars jockeying for position, overhead views of cars whizzing along the course, views of the driver seen upward from the floor of the car, and closeups of the driver set in grim determination (or, in Ken’s case, often talking himself sardonically into the fray).

The result is a jumble of spectacular details, thrown together to convey a whirl of high-speed activity that signifies racing and conveys speed and inscribes the drama into it, but without conveying the essential experience of a race. Where is the point of view of a driver, through the windshield, seeing the road ahead and the other drivers? Whatever it is that makes the uninitiated soil themselves and renders a grown man a blubbering mess, but which such people as Ken and Shelby can handle with cool and ardent engagement, goes utterly unexperienced by the movie’s viewers (and I sat in the second row in front of a very big screen). The overeager tangle of varied images turns the moment-by-moment excitement of a race into a mere special-effects dump—a scaled-up version of a car commercial.

Though “Ford v Ferrari” is rooted in history and based on the quasi-documentary details of auto racing (including a great moment in the film—when Phil uses Scotch tape and a ball of yarn to outdo the computer-based analyses of Ford’s technicians), its franchise-like tailoring of emotion and action turns the movie empty and hollow. Howard Hawks made one of the greatest of all auto-racing dramas—“Red Line 7000,” from 1965—at the same time that the key events of “Ford v Ferrari” took place. But Hawks’s film, far from being a celebration of the enabling compromises of working with the big auto studios, looks closely at the personal and competitive conflicts of drivers—and it blends thrilling views of auto races with detailed stories of the complicated intimate lives of the drivers, and, in the process, weaves cultural change (the widespread popularity of rock music, the age of sexual liberation) into the action. Mangold’s film, dealing with matters of life and death, of fortune and fame, of industrial survival and personal vision, infantilizes them. The corporate culture that it reflects and embodies is, above all, sanctimoniousness, nostalgic, and priggish.