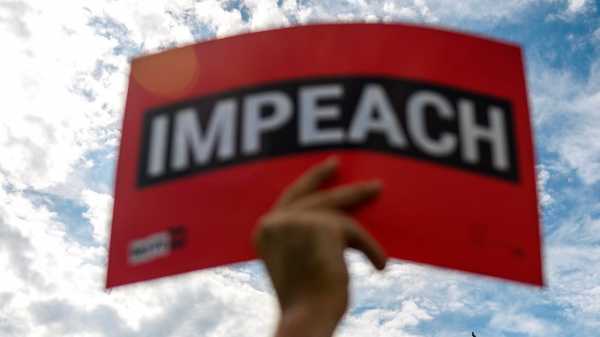 With impeachment season in full swing, the podsphere has sprung into action, providing, in a host of new impeachment podcasts, highlights, insights, and, I can only hope, a deep dive on “I think we primarily discussed A$AP Rocky.” We have, among others, “Impeachment Today,” from BuzzFeed News, hosted by the effervescent Hayes Brown; “Impeachment Explained,” from Vox, with Ezra Klein; “Impeachment,” from WNYC, hosted by the doggedly on-the-ball Brian Lehrer; “Impeachment Inquiry,” from the Washington Post, whose title reminds us that we’re not quite there yet; “The Latest,” whose title demurs even further, from the Times’ “The Daily” crew; CNN’s “The Daily DC: Impeachment Watch,” with David Chalian; and NBC News’s “Article II,” hosted by Steve Kornacki, whose frenzied election-map calculations on MSNBC have charmed millions. Meanwhile, Steve Bannon’s “War Room: Impeachment,” on conservative talk radio, “live at the Breitbart embassy,” “in the year of our lord 2019,” has “metastasized as being one of the fastest-growing, I think, podcasts ever,” Bannon said, proudly, in a recent episode. And, last week, we learned that Rudy Giuliani has considered creating an impeachment podcast of his own, in which, presumably, his freewheeling, often self-incriminating commentary—which, until now, was available only via his TV punditry, pocket dials, and social-media snafus—would metastasize into ad-supported content. After Sondland’s energetic hurling of Giuliani under the bus on Wednesday, I say, Rudy, bring it on.

What do we want from an impeachment podcast? As with Kornacki’s gymnastic election-map elucidations, I’m hoping for a news product that adds up to something reassuring, even while I know full well that newscasters have no control over the news. When reassurance is elusive, a degree of sanity, in the form of perspective and understanding, is the next best thing. To that end, all of the news outlets’ impeachment podcasts are helpful. They all recap the hearings and the latest developments, generally with sound clips, narration, guests, and some level of interpretation; Brian Lehrer’s show sometimes incorporates questions from callers. They’re all made efficiently—the Post’s culls content from existing shows, including “Can He Do That?,” whose answer we await—and thus without extensive production bells and whistles; they’re a step up from talk radio but not quite “The Daily.” And they’re sober in style—well, most of them. BuzzFeed’s “Impeachment Today” is effortfully entertaining, with danceable theme music, Brown saying playful things like “whomst” and “Hold onto your butts,” a cast-of-characters segment called “This Fucking Guy,” and a Nixonmeter, rating our current moment on a scale from zero to ten, with zero being a normal day and ten being Richard Nixon resigning and flying off in Marine One. (Cue the helicopter sounds.) Before Sondland’s testimony, we were at a 7.1; I expect that to change. Though the substance of “Impeachment Today” is similar to that of the others, with a similar degree of helpfulness, it’s the only impeachment podcast that would sum up Vindman’s zinger performance-review citation (“He is brilliant, unflappable, and exercises excellent judgment”) with “What. A. Flex.”

When I first started listening to the impeachment pods, I found most of them straightforward and rote, and “Impeachment Today” a bit much. The problem, of course, was that I, like many others, had already been gleaning up-to-the-minute information from online news, TV analysis, and watching the hearings themselves. Though a second sorting-through via podcast seemed helpful, what I really wanted was something beyond that—perspective, context, interpretation, and possibly a little art. Tuesday changed those instincts. After the exhausting marathon of testimonies and speechifying, I just wanted somebody to remind me of the essence of what the hell was going on. In that frame of mind, I appreciated the service they all provided—including that of Hayes Brown making me laugh. (“And chair Adam Schiff was, like, ‘What? No! Y’all need to stop!’ O.K., here’s the tea . . .”)

I’m curious to see what becomes of these shows after Fiona Hill’s testimony, on Thursday; may they continue to guide us. Meanwhile, the best impeachment-related podcast content, in my opinion, comes from a different show entirely, and one that doesn’t come out daily: the reliably great “Trump, Inc.,” from WNYC and ProPublica, co-hosted by Andrea Bernstein and Ilya Marritz. Since February, 2018, it’s produced an amazing amount of investigative reporting on Trump’s endless financial shenanigans and presented its findings in beautifully produced episodes that feel like well-told stories. Its narration is intelligent yet conversational; its sophisticated sound design guides us along without being showy or intrusive. Listening, I feel like I finally grasp the topic at hand. And that understanding—even though it’s about depressing corruption—actually feels pleasurable. Its episode “Ukraine,” which came out in October, is like a carefully reported horror thriller and is as damning of Giuliani as Sondland’s testimony has been. “The Diplomat, the Machers, and the Oligarch,” from last week, begins with a cinematic juxtaposition of two events on October 11th: Marie Yovanovitch’s nine hours of closed-door testimony and Donald Trump, Jr.,’s conspiracy-theory-laden speech at the Doral, the crowd jovially shouting “Where’s Hunter?” Then it backs way up and explores the details at the center of the impeachment-inquiry hearings through the lens of the business interests behind them. As riveting as the hearings may be, it’s that story—of the business interests merging with the personal—that seems to have the answers.