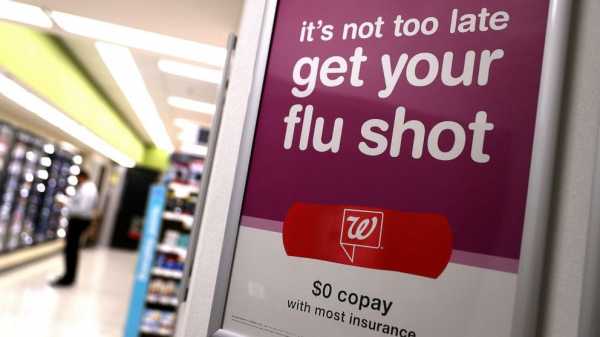 This is a Kaiser Health News story.

Add Flu Season as an interest to stay up to date on the latest Flu Season news, video, and analysis from ABC News.

In the Byzantine world of health care pricing, most people wouldn’t expect that the ubiquitous flu shot could be a prime example of how the system’s lack of transparency can lead to disparate costs.

The Affordable Care Act requires health insurers to cover all federally recommended vaccines at no charge to patients, including flu immunizations. Although people with insurance pay nothing when they get their shot, many don’t realize that their insurers foot the bill — and that those companies will recoup their costs eventually.

In just one small sample from one insurer, Kaiser Health News found dramatic differences among the costs for its own employees. At a Sacramento, Calif., facility, the insurer paid $85, but just a little more than half that at a clinic in Long Beach. A drugstore in Washington, D.C., was paid $32.

The wide discrepancy in what insurers pay for the same flu shot illustrates what’s wrong with America’s health system, said Glenn Melnick, a health economist at the University of Southern California.

“There is always going to be some variance in prices, but $85 as a negotiated price sounds ridiculous,” he said.

Flu shots are relatively cheap compared with most health services, but considering the tens of millions of Americans who get vaccinated each year, those prices add up.

(MORE: CDC warns that more pregnant women should get the flu shot: What to know)

“The patient is immune from the cost, but they are the losers because eventually they pay a higher premium,” said Ge Bai, an accounting and health policy professor at Johns Hopkins University’s campus in Washington, D.C.

Bai said the variation in payments for flu shots has nothing to do with the cost of the drug but is a result of negotiations between health plans and providers.

But there’s one place those dollar figures appear for anyone to see: the “explanation of benefit” forms that insurers send to members after paying a claim.

KHN reviewed forms that one of its insurers, Cigna, paid for some colleagues to get flu shots this fall in Washington, D.C., and California.

Cigna paid $32 to CVS for a flu shot in downtown Washington and $40 to CVS less than 10 miles away in Rockville, Md.

In Southern California, Cigna paid $47.53 for a flu shot from a primary care doctor with MemorialCare in Long Beach. But it paid $85 for a shot given at a Sacramento doctors’ office affiliated with Sutter Health, one of the biggest hospital chains in the state.

Health experts were not surprised insurers paid Sutter more, though they were stunned just how much more.

“Sutter has huge clout in California, and insurers have no other option than to pay Sutter the price,” Bai said.

For years, Sutter has faced criticism that is uses its market dominance to charge higher rates. In October, it settled a lawsuit brought by the state attorney general, employers and unions that accused the hospital giant of illegally driving up prices.

The $85 was not just far more than what Cigna paid elsewhere but also more than triple the price Sutter advertises on its website for people without insurance: $25.

How does Sutter justify its higher prices as well as different prices for the same shot at the same location?

Sutter officials had no simple explanation. “Pricing can vary based on a number of factors, including the care setting, a patient’s insurance coverage and agreements with insurance providers,” Sutter said in a statement.

Cigna also said many issues are considered when determining its varied payments.

“What a plan reimburses a pharmacy/clinic/medical center for a flu vaccine depends on the plan’s contracted rate with that entity, which can be affected by a number of factors including location, number of available pharmacies/facilities in that area (a.k.a. competition), and even the size of the plan (a.k.a. potential customers),” Cigna said in a statement. “It is important to keep in mind that hospitals and pharmacies have different economics, including the cost to administer.”

Nationally, self-insured employers and insurers paid between $28 and $80 for the same type of flu shot administered in doctors’ offices in 2017, according to an analysis of more than 19 million claims of people under 65 years old by the Kaiser Family Foundation in partnership with the Peterson Center on Healthcare. (Kaiser Health News is an editorially independent program of the foundation.)

“Your health plan could end up paying more than double the cost for the same flu shot depending on where you get it,” said Cynthia Cox, a vice president at the foundation.

“We see the same pattern for more expensive services like MRIs or knee replacements,” she said. “That variation in prices is part of what’s driving insurance premiums higher in some parts of the country.”

The wide discrepancy in costs for the same service highlights a major problem in the U.S. health care system.

“We don’t have a functioning health care market because of all this lack of transparency and opportunities for price discrimination,” Melnick said.

“Prices are inconsistent and confusing for consumers,” he said. “The system is not working to provide efficient care, and the flu shot is one example of how these problems persist.”

An unintended consequence of the health law making flu shots free for insured patients is that health plans have little ability to direct patients to providers that offer the vaccine for less cost because patients have no reason to care, Bai said.

Around the country, retailers like Target and CVS offer various incentives such as gift cards and coupons to entice consumers to come in for their free flu shots in hopes they shop for other goods, too. Some hospital systems such as Baptist Health in South Florida have also started providing  free flu shots for people without insurance.

Bai said that while hospitals like Baptist should be praised for helping improve the health of their communities, there are other factors in play.

“There is a hidden motivation to use free flu shots as a marketing tool to improve the hospital’s reputation,” she said. “If people come to the hospital for a flu shot, they may like the facility and come again.”