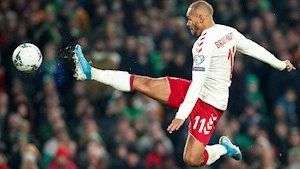 The Republic of Ireland can clinch their place at Euro 2020 with victory over Denmark in Dublin on Monday evening.

Mick McCarthy’s men will run out knowing a win in their final Group D fixture will secure a top-two finish and mean they avoid a tricky play-off campaign.

Here, the PA news agency takes a look at some of the talking points surrounding a crucial game.

McCarthy took few risks for Thursday night’s 3-1 friendly win over New Zealand when he left most of his key men sitting on the sidelines with the Danes firmly in mind. Goalkeeper Darren Randolph, just one game into his comeback from a thigh injury, and striker David McGoldrick, who missed last month’s double-header in Georgia and Switzerland, are fit to return to a team which is missing only suspended skipper Seamus Coleman.

If the manager’s team selection against the All Whites was a tacit admission that those who played major roles would not be expected to do so again on Monday evening, Jack Byrne’s withdrawal with 27 minutes remaining might have been significant. The Shamrock Rovers midfielder’s invention and confidence on the ball could prove useful in a tight encounter and he may just have played his way into McCarthy’s thoughts.

Troy of the Rovers?

Seventeen-year-old Tottenham striker Troy Parrott was quietly impressive on his first senior appearance for his country against New Zealand having proved his potency at Under-21 level. While it would be a push to expect him to contribute in such a high-profile fixture, he has remained with the squad and it would be in keeping with his meteoric rise if he got a chance to prove his worth and did just that.

A succession of Ireland players have been at pains to deny that revenge is on their minds as they prepare for the game, but for those who were involved when the Danes came to Dublin for the second leg of a World Cup play-off two years ago and left 5-1 winners, the scars remain. Righting the wrongs of that evening may not be the main focus, but victory this time around would be all the sweeter as a result.

November 18 is a date which is engraved into the Irish sporting psyche. It was on that day in 2009 that Ireland drew 1-1 with France in Paris as their dreams of making it to the World Cup in South Africa were ripped apart on a night which will always be remembered for Thierry Henry’s unpunished handball. A win this time around might just create a more positive association.