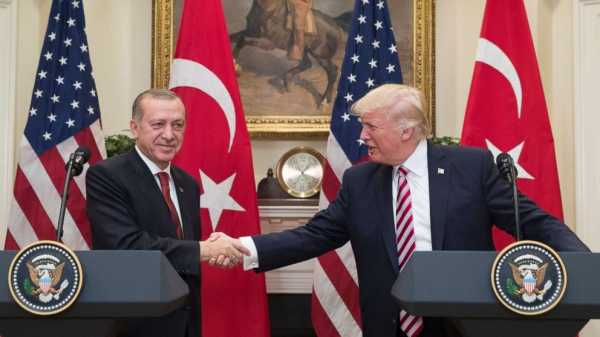 Despite high tensions in U.S.-Turkish relations over more than half a dozen issues, President Donald Trump will host Turkish President Recep Tayyip Erdogan at the White House Wednesday in what is expected to be another friendly meeting between the two leaders.

Add Turkey as an interest to stay up to date on the latest Turkey news, video, and analysis from ABC News.

To his critics in Washington, including Republican and Democratic lawmakers, Erdogan is an increasingly authoritarian ruler who has strengthened ties with Russia and attacked America’s key partner in the fight against the Islamic State, the Syrian Kurds. But Trump has repeatedly praised Erdogan as a close ally with whom he has a warm bond.

«He’s a friend of mine, and I’m glad we didn’t have a problem because, frankly, he’s a hell of a leader, and he’s a tough man, he’s a strong man,» Trump said of Erdogan on Oct. 17, just hours after the Turkish leader signed a joint declaration with Vice President Mike Pence to pause Turkish operations against Syrian Kurdish forces and eventually agree to a ceasefire if those forces withdrew from a buffer zone. 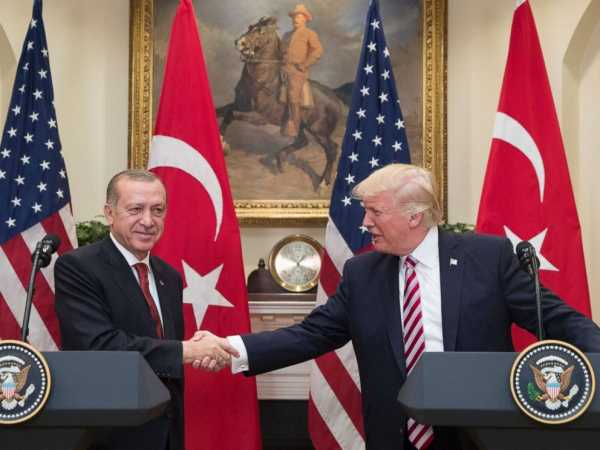 President Donald Trump shakes hands with President of Turkey Recep Tayyip Erdogan in the Roosevelt Room where they issued a joint statement following their meeting at the White House, May 16, 2017, in Washington, DC.

But while the Trump administration says that the ceasefire has held and kept Syrian Kurds safe, the military leadership of the majority-Kurdish Syrian Democratic Forces, or SDF, said as recently as Tuesday that Turkey continued to violate the ceasefire and attack Syrian Kurdish positions.

«We call on the international community, primarily the United States and the Russian Federation, to put pressure on Turkey and force it to abide by the agreements made with them to stop military operations,» the Syriac Military Council, a division of the SDF said in a statement.

«He invaded Syria and he put an ally at risk, and I don’t see where he’s changed his behavior to warrant an invitation, but that’s up to the president,» he told reporters Thursday.

Critics charge that Trump gave Erdogan a «green light» to invade northeastern Syria in the first place and attack the SDF, which Erdogan considers a terrorist organization. While Trump pulled U.S. forces back from the border and then called for all troops to withdraw, the White house has said it opposed the offensive — and Trump has since ordered several hundred troops to stay in Syria.

But after sanctioning three senior Turkish officials and two ministries for just days, Trump lifted any economic penalty for Erdogan, even in the face of allegations Turkish forces and their Syrian opposition allies committed war crimes. 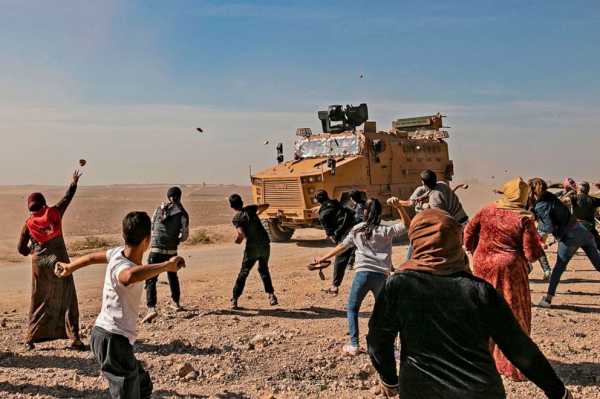 Syrians throw stones towards Turkish military vehicles during a Turkish-Russian army patrol near the town of Darbasiyah in Syria’s northeastern Hasakeh province along the Syria-Turkey border on Nov. 11, 2019.

Margaret Huang, executive director of Amnesty International USA, said Tuesday, «It is absolutely critical that the White House send a message that these actions and this unlawful behavior on the part of Turkish forces is stopped and that folks are held accountable for the violations that they’ve caused.»

A senior administration official told reporters late Tuesday that they «will continue to raise those issues at the highest level and make sure the Turkish government is fully aware of how important that is to the United States.»

Beyond Turkey’s offensive into Syria, there are several other issues that have damaged the relationship despite the personal bond between the two presidents.

Trump and Erdogan are expected to discuss Turkey’s purchase of a Russian missile defense system, the S-400, which led to Turkey’s expulsion from the F-35 fighter jet program and should have triggered U.S. sanctions. So far, Trump has declined to do so — infuriating lawmakers who mandated such sanctions as part of a law meant to crack down on Russia.

A second senior administration official said, «We, as allies, need to resolve this issue of the S-400. One has to move, and then the other has to move» — implying there could be a way forward without sanctions and that could include Turkey’s readmission to the F-35 program, although it’s unclear whether lawmakers will go along with that, especially after the House voted on Oct. 29 to impose new sanctions on Turkey over its northern Syria offensive.

In a move that infuriated senior Turkish officials, Congress also passed a resolution on the same day that recognized the 1915 mass killings of an estimated 1.5 million Armenians at the hands of the Ottoman Empire, the precursor to modern-day Turkey, as a genocide. Turkey has long denied any genocide and said Armenians were not specifically targeted in the larger violence of World War I.

On Turkey’s side, Ankara has accused the U.S. of supporting Kurdish terrorists by arming the SDF, as well as harboring a terrorist leader who Turkey says plotted a July 2016 coup attempt against Erdogan’s government. Fethullah Gulen, a Turkish cleric and lawful, permanent resident living in Pennsylvania who was once a close Erdogan ally, has denied any responsibility for the coup, and so far, the U.S. has denied extradition requests from Turkey for Gulen. 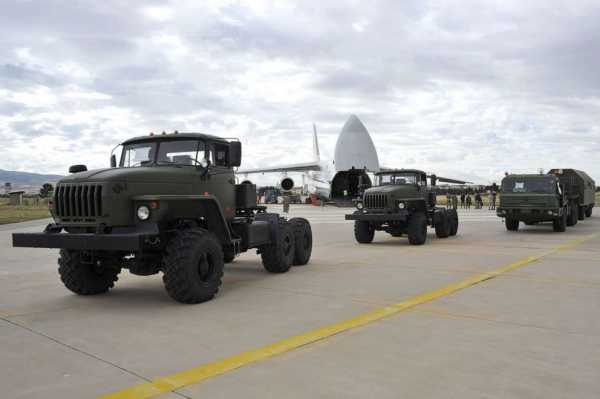 A handout photograph taken on July 12, 2019, by the Turkish Defence Ministry shows a Russian military cargo plane carrying a S-400 missile defense system from Russia to the Murted military airbase in Ankara, Turkey.

Erdogan has also pushed the U.S. to drop charges against an executive at the state-run Halkbank, which the Justice Department indicted on Oct. 15 for circumventing U.S. sanctions. ABC News confirmed that during a 2017 Oval Office meeting, Trump pressured then-Secretary of State Rex Tillerson to push the Justice Department to drop a criminal case against an Iranian-Turkish gold trader, who was being represented by Rudy Giuliani, according to a source with direct knowledge of the matter. The source told ABC News that many top-level aides, including Tillerson and then-chief of staff John Kelly, told the president he could not get involved in the matter. The DOJ never did, and the man later cooperated with prosecutors and implicated Erdogan in the sanctions evasion scheme.

In a move that infuriated senior Turkish officials, Congress passed a resolution on Oct. 29 that recognized the 1915 mass killings of an estimated 1.5 million Armenians at the hands of the Ottoman Empire, the precursor to modern-day Turkey, as a genocide. Turkey has long denied any genocide and said Armenians were not specifically targeted in the larger violence of World War I.

During Erdogan’s last visit to the White House, his security officials assaulted peaceful protesters outside the Turkish ambassador’s residence in Washington where Erdogan was staying. A lawsuit by 15 of the victims in May 2018 detailed several injuries, including against 62-year-old Murat Yasa, who was kicked repeatedly in the face, suffered a concussion, had teeth knocked out and had recurring symptoms including memory loss, while one unidentified female victim was beaten to the point of having multiple seizures.

Federal prosecutors charged 15 Turkish security officials, but in March 2018, all charges were dropped against 11 of them after four had their charges dismissed in November 2017. The announcement that charges were dropped came one day before Tillerson met Erdogan and his foreign minister in Ankara without any aides, raising eyebrows.