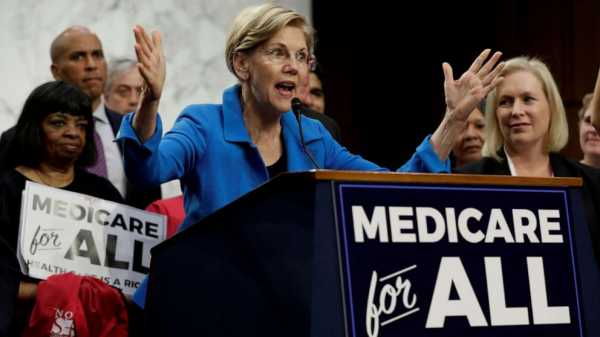 2020 hopeful Sen. Elizabeth Warren rolled out her much-anticipated plan for transitioning the country to a completely government-operated, single-payer health care system on Friday, announcing she does not intend to entirely move the country toward «Medicare for All» until what would be her third year in office.

The Democratic senator from Massachusetts proposed a gradual, two-part plan to achieve Medicare for All.

The first part encompassed a series of cost-easing initiatives and expanded coverage, which, Warren said, would steer national health care toward universal coverage, while still maintaining a private option. Not until the second phase, when Warren would push to pass Medicare for All legislation, would the country shift over entirely.

This would not occur until well into the final stretch of her first term: Warren wouldn’t seek passage of full-scale Medicare for All until as late as 2023 — after midterm elections, when Democrats could potentially lose seats, forfeit congressional power, and make it harder to pass.

(MORE: ‘Not one penny’: Warren offers plan to pay for ‘Medicare for All,’ promising no hike on middle class taxes)

But the first step would kick off within her first 100 days in office. During this time, Warren proposed that she would use executive orders to grow the Affordable Care Act’s reach, as well as create a no-premium public option for minors and low-income families, and available to others.

The plan likely would face congressional blowback, even if the Democrats were to win the House and the Senate by 2023.

Those in the centrist lane of the Democratic party, including moderate senators vying against Warren for the 2020 nomination, have been vocal critics of her plan, the two-part rollout of which she defended as pragmatic. 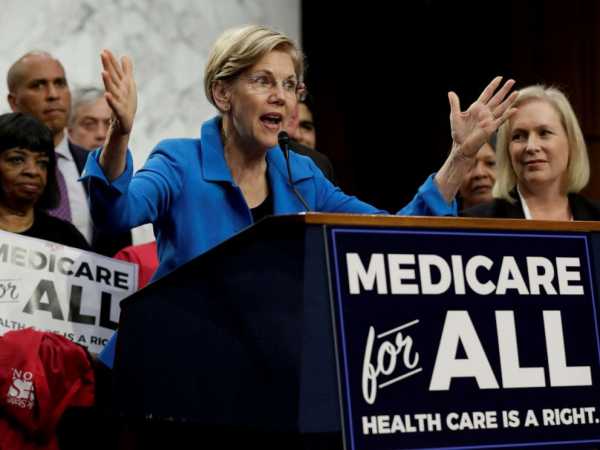 «Every successful effort to move the United States to create and expand new social programs — like Social Security and Medicare and Medicaid — has required multiple steps. In fact, every credible Medicare for All proposal has a significant, multi-step transition built in. That’s why it’s important to have both short-term goals and long-term goals to guide the process and to deliver concrete improvements to people’s lives at every stage,» Warren wrote in the plan.

Sanders’ transition to Medicare for All, by comparison, also allows for a few years to make the full switch. However, his would transition by age bracket, and he’d seek to pass it sooner.

(MORE: Warren won’t say if she’d raise middle class taxes to pay for Medicare for All)

Experts like Larry Levitt, executive vice president for Health Policy at the Kaiser Family Foundation, called the first part of Warren’s plan, which wouldn’t require congressional approval, the «most interesting.»

«This is not just a transition plan — it’s fully fleshed out and could also stand on its own, even if Medicare for All never happens,» Levitt said in an interview with ABC News.

As for pushing passage of Medicare for All to her third year, Levitt remained skeptical.

«Not rolling out Medicare for All until her last year — well, who knows if that could get done in time. It might just become a strategic rallying cry for her second term,» he said.

The plan also provides a contrast to Warren’s oft-used call for «big structural change,» Levitt said, because it offers a measured approach on one of her most sweeping proposals.

«She’s threading a very tiny needle here, laying out a lot of ambitious items that will take time,» Levitt said. «She’s vowing to shore up the Affordable Care Act and work quickly,» similar to proposals by Joe Biden and Pete Buttigieg.

Biden and Buttigieg’s campaigns have criticized the newest details of her plan, describing it as backtracking from a single-payer system. Others called Warren out for releasing her details on a busy Friday when impeachment hearings dominated headlines.

It’s not the first time Warren has been accused of being evasive on health care, as she, for months, faced sharp criticism for her continuous dodging on how she’d pay for the program.

But others, like Ken Thorpe, the chair of the Department of Health Policy and Management at Emory University, appreciated the plan’s slower rollout pace.

«I think she’s put out a plan that is a little bit more realistic in terms of actually getting it implemented,» Thorpe told ABC News. «If you break it into two pieces, this certainly has a much higher chance of passing.»

Skeptical of government-run health care’s costs and political viability, but supportive of universal coverage, Thorpe said he wouldn’t describe Warren’s plan as the traditionally-known Medicare for All — it’s partly why he thought highly of it.

«I’d call it a Medicare buy-in, which is what it is, really,» Thorpe said. «It’ll dramatically expand health insurance right off the bat, which is I think a goal [other Democratic candidates] all agree with.»