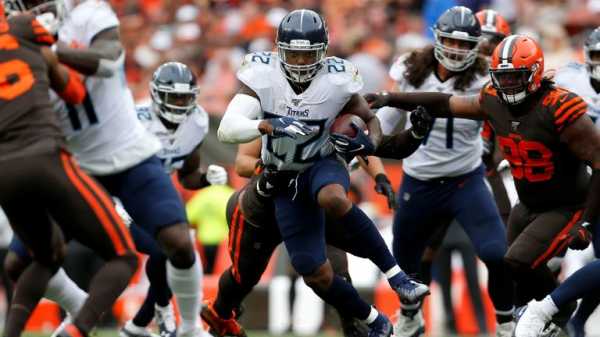 5:26 The Titans dominated the Browns in Cleveland in Week One

Far from the confident, loud-mouthed, trash-talking competitor he was as he led the team to their best record since 2007 last year, Mayfield looked lost and confused.

But it has not been pressure or wild blitzes that have caused Mayfield issues — something you might expect with young quarterbacks. He actually has the lowest passer rating in the league when not under pressure this season (79.8), and has thrown eight TDs compared to 10 picks. He is the only QB in the league with more interceptions that touchdowns when not pressured.

General manager John Dorsey went out and got his quarterback a weapon — one of the best in the league — when he acquired Beckham from the Giants for Jabrill Peppers, a first-round pick and a third-rounder in March, but even his presence hasn’t helped.

The pair have connected on just 44 of 79 targets (55.7 per cent) and Beckham has scored one touchdown all year. Consider he had 44 TDs in 56 starts in New York and a catch rate of 62.7, and it’s clear things aren’t right. 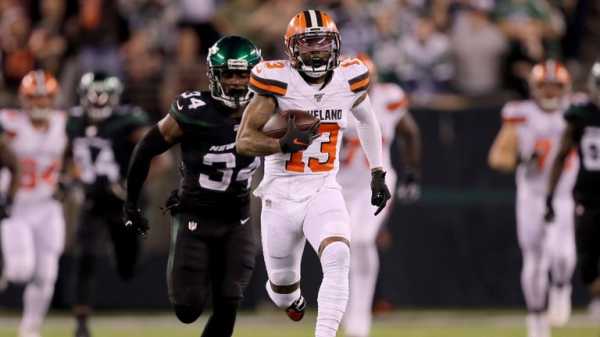 1:00 Beckham Jr’s only touchdown this season came in Week Two

Then there’s Beckham’s college buddy and four-time Pro Bowler Jarvis Landry, who is also on pace for a poor year. He caught a fantastic 70.2 per cent of his targets during his four years in Miami before a trade to Cleveland last summer, and he’s all the way down at 55.8 as a Brown.

After Kitchens was promoted to offensive coordinator from running backs coach midway through last season, the team went 5-3 and looked to be on the way up as he took the top job in the summer. But everything so far suggests it is not working out with Kitchens in charge and Todd Monken at OC. The Browns are all the way down at 26th in scoring offense.

Are they just growing pains or is yet another coaching regime going to fail in Cleveland? 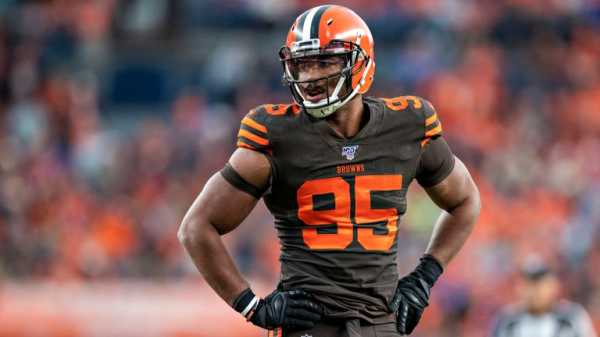 The defense, too, has been underwhelming. In came Steve Wilks from Arizona to take over a defense with plenty of talent. However, they turned from one of the league’s most opportunistic groups to a middle-of-the-road D.

While they have shown some improvements in overall yards and against the pass, the turnover totals are where the problems lie.

Last season, they recorded 17 interceptions through 16 games. This year, they’ve only managed four through nine. In 2018, they were the second-best team in the entire league in terms of total takeaways (31), but this time around, they rank as the fifth-worst group with just nine takeaways so far.

If this team is going to turn things around, it’s not just all about Mayfield and the offense.

Season on line against Steelers 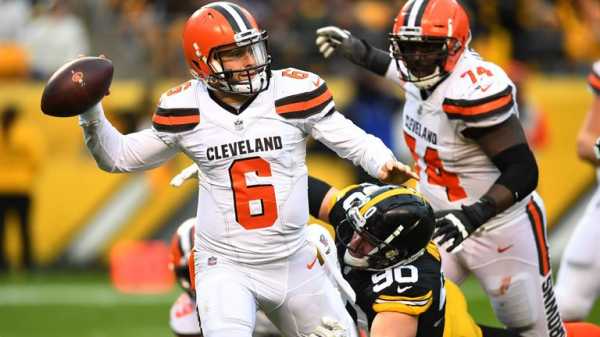 Ultimately, all of this could mean we were too early on the Browns. Kitchens is in his first year, Mayfield is learning in his second, and overall this is a young team. But if they are set to mount a second-half run after an impressive win over the 6-2 Bills last week, they need another victory when they host the Steelers on Thursday night.

Like Cleveland, Pittsburgh started the season slowly, falling to 1-4 after five games. However, those losses were to the best teams in the league — New England, Seattle, San Francisco and Baltimore — and now they are streaking with four straight wins, only trailing fellow North rivals the Ravens with five in a row.

They have elevated themselves from a team that lost its three best attacking players — Antonio Brown and Le’Veon Bell in the offseason and Ben Roethlisberger to injury in Week Two — and looked like it would treat this year as a write-off, to the current projected sixth seed in the AFC.

One key player in the turnaround has been defensive back Minkah Fitzpatrick, who was acquired for a first-round pick from Miami and will be aiming to cause Mayfield more problems. 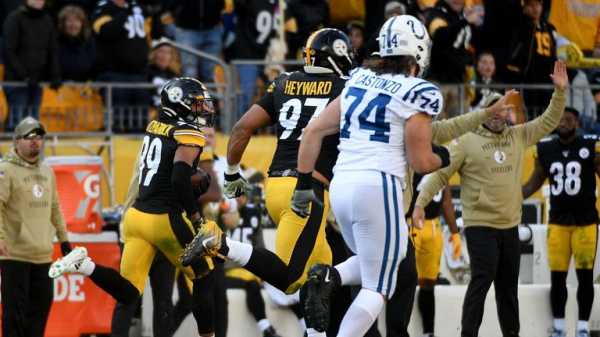 0:48 Minkah Fitzpatrick has been a playmaking machine since his arrival from Miami

Since Fitzpatrick’s Week Three debut for the Steelers, he has five interceptions in seven games. That ties him with New England’s Devin McCourty for the most in the league, and he has managed at least one pick in three straight outings. Plus, with both a fumble and interception returned for touchdowns, he has more TDs than Beckham Jr this season!

Pass-rusher T.J. Watt is also leading the team’s turnaround, causing endless pressure and racking up 9.5 sacks so far. This defense will disrupt Mayfield all night.

If the Browns win — something they haven’t done against the Steelers since 2014 — they will be just one game behind Pittsburgh with a clean 2-0 division record and four games left within the North to make up the difference.

If they don’t, it’s back to square one as another losing season looms.

Watch Steelers at Browns live on Sky Sports Action and Main Event from 12.30am on Thursday night; kick-off is at 1.20am on Friday.