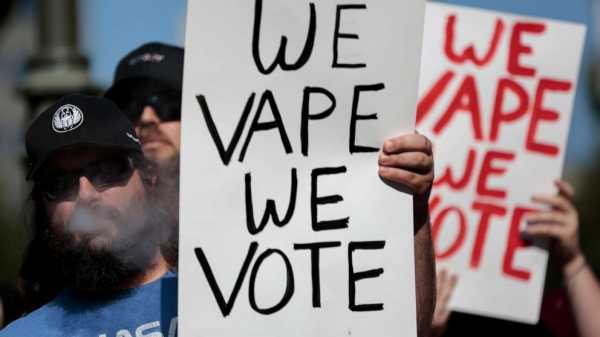 The White House said Monday that President Donald Trump might still take action on vaping after reports that he had backed off a proposal to ban flavored e-cigarettes partly over concerns about the political fallout with 2020 voters.

Earlier this month, the president was poised to announce a promised administration action to ban flavored e-cigarettes but pulled back on that amid worries that the policy could hurt him among his political base and lead to job losses, sources tell ABC News.

It was two months ago that President Trump, with the first lady at his side, announced in the Oval Office that the administration would soon be announcing bold action on the issue.

“It pertains to innocent children, and they’re coming home and they’re saying, ‘Mom, I want to vape.’ And the parents don’t know too much about it,” the president said in September. “And we’re going to have to do something about it.”

Health and Human Services Secretary Alex Azar said at the time the administration would be quickly finalizing a guidance document to require all flavors, other than tobacco flavor, would be removed from the market.

But when the administration was poised to make its vaping announcement earlier this month, the process came to a sudden halt. 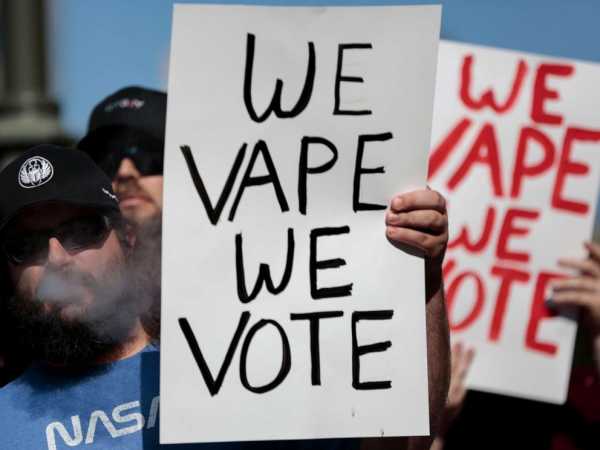 Mark Asbrock, of Fairfield, Ohio, vapes while listening to speakers during a vaping advocates rally, Oct. 1, 2019, at the Ohio Statehouse in Columbus, Ohio.

Still, the White House insists that action on vaping is still under active consideration.

“President Trump and this Administration are committed to responsibly protecting the health of children. At this time, we are in an ongoing rulemaking process, and I will not speculate on the final outcome,” White House deputy press secretary Judd Deere said in a statement.

The first lady, as well as the president’s daughter Ivanka, has been a leading advocate in favor of the ban over concerns about addiction among children, but the president’s campaign manager Brad Parscale and others have since warned the president that the move could be unpopular among his base.

Public health leaders like Nancy Brown, CEO of the American Heart Association, said they were alarmed at reports the president is changing course from the previously announced plans.

“We are deeply troubled by reports that politics may be interfering with policy that would prevent children from the dangers of e-cigarettes,” Brown said in a statement Monday.

“We remain hopeful the Trump administration will listen to the concerns expressed by the First Lady and millions of parents and move forward with plans to remove all flavored e-cigarettes, including mint and menthol, from the market.”

There were also concerns expressed that the move could lead to job losses within the vaping industry and damage the president’s pro-jobs image. According to the Bureau of Labor Statistics, there are 40,000 people working in vape shops, and industry advocates have said they would have to close if there was a ban.

Industry supporters have said they’re encouraged to see reports the president is open to hearing their concerns.

«Faced with a highly motivated group of small business owners and recovering smokers who became fired up to vote in 2020, we have been able to show Washington D.C. that sensible and targeted regulations should be attempted before resorting to prohibition. Prohibition failed miserably with alcohol and marijuana and the same result would have occurred with a ban on flavored nicotine vaping products,» Gregory Conley, president of the American Vaping Association advocacy group, said in a statement.

After Trump and HHS said the federal government would ban flavored pods, industry officials argued that menthol and mint should be allowed – an exception that would put e-cigarettes on par with traditional tobacco cigarettes sold in stores.

The president has since indicated he may be open to stepping back from a full ban on flavored vaping products, saying on Twitter last Monday that he would meet with pro-vaping advocates and others to discuss plans.

But sources in the vaping industry told ABC News last week they had yet to be contacted by the administration to set up a meeting.