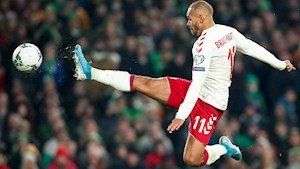 Glenn Whelan is treating the Republic of Ireland’s Euro 2020 shoot-out with Denmark is if it is his last big game.

The 35-year-old Hearts midfielder thought his international career had drawn to a close during the latter part of Martin O’Neill’s reign as manager, but he has returned under Mick McCarthy to establish himself in the team once again.

However, with his 36th birthday fast approaching in January, he knows he has to savour every last minute he has left wearing the green shirt of Ireland and Monday night’s quest for qualification could be as big as it gets.

Whelan said: “This is what we want, this is why we’re here. This is why we rock up for friendlies when you could be on the beach having four or five days off. This is why you play for your country, to play in these games.

“There are kids out there who are dreaming of playing for Ireland. It could be the last big night for me and I’m going to cherish it and enjoy it as much as I can, even though it’s a big game.

“For me to get a second bite at the cherry as it is – it was taken away from me, I was never going to play for my country again and now I’ll, please God, get picked tomorrow to play in possibly one of the biggest games that Ireland have played in.

“For me I’m going to cherish it, take it on board. Although it’s nerve-wracking and it’ll be tight, I’m going to enjoy it as much as I can.”

It will be a big night too for central defender Shane Duffy, who will captain Ireland in the absence of the suspended Seamus Coleman.

Duffy said: “It’s a huge honour. To even play for your country is a massive milestone in your career and to lead the boys out, hopefully I’ll take it in my stride and won’t let it affect me.

“I’m excited for it, my family will be proud and I’ll be proud as well. But the main objective is to go out there and just play the game and try and get the win.”

That is something Ireland have not managed in their five previous encounters with the Danes over a two-year period, although four draws have been overshadowed by the 5-1 thumping in Dublin which cost Duffy and his team-mates a trip to the 2018 World Cup finals.

The Brighton defender said: “Obviously you don’t forget about a night like that. It’s a low point in our careers for most of us who played on the night, but football moves on quickly and we have another chance.

“It’s a different team, a different manager and we are all excited for it and positive that we can get the result.”