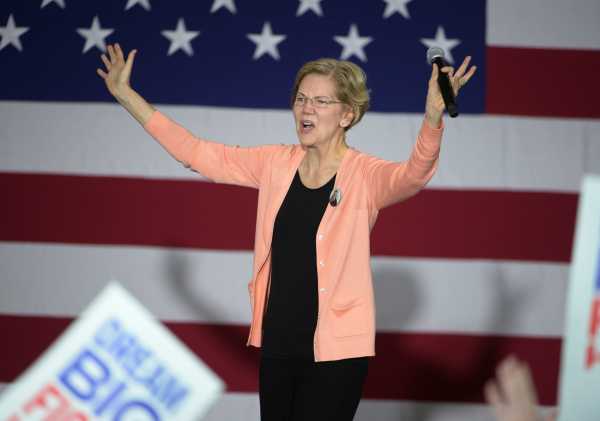 Sen. Elizabeth Warren is not shying away from the parade of ultra-rich guys fretting about her in the press — instead, she appears to be egging them on. From a tax calculator meant for billionaires to a new campaign ad, a twist on a popular meme, and campaign coffee mug reading “BILLIONAIRE TEARS,” the Massachusetts Democrat is leaning into her billionaire battle.

It’s a way to fire up supporters and a signal of her campaign’s calculation that billionaires complaining about her helps and doesn’t hurt. At the current moment, the word billionaire is accompanied with almost a villainous connotation among much of the American public, especially on the left, and Warren appears to be trying to capitalize on it. And taking on billionaires is also a way to remind voters of her past as a longtime critic of the financial industry, Wall Street, and the big banks.

On Wednesday, Warren’s campaign launched a new ad titled “Elizabeth Warren stands up to billionaires.” It features Warren on the campaign trail touting her proposed wealth tax and remarking, “I’ve heard that there are some billionaires who don’t support this plan.” The ad then cuts to excerpts of interviews with billionaires talking about her in interviews — hedge funder Leon Cooperman, TD Ameritrade founder John Ricketts, former Goldman Sachs CEO Lloyd Blankfein, and entrepreneur Peter Thiel. And it takes shots at them — Cooperman’s settlement on insider trading, Ricketts’s Republican donations, Blankfein’s earnings during the financial crisis, Thiel’s ties to Facebook and Donald Trump — all while noting their net worths.

What’s notable about the ad isn’t just what’s in it, but also where the senator’s team is placing it: on CNBC. The financial news outlet reported that the ad was going to be shown during two of its most popular shows on Thursday. Warren is taking aim at rich guys, and she wants them to know it.

CNBC has been fanning the flames of the billionaires vs. Warren narrative, perhaps especially when it comes to Cooperman, who spent 25 years at Goldman Sachs before starting a hedge fund, Omega Advisors, that he has since converted to a family office. In September, Cooperman told CNBC he thought the stock market would fall by 25 percent if Warren wins the presidency, if it opens at all. The pair have been engaged in a war of words since, much of which is occurring on CNBC.

In response to Warren’s new ad, Cooperman told CNBC’s Brian Schwartz that Warren is “disgraceful.” He continued, “She doesn’t know who the fuck she’s tweeting. I gave away more in the year than she has in her whole fucking lifetime.”

Warren’s team responded to Schwartz’s tweet with “ok billionaire,” a play on the “ok boomer” meme rampant across the internet.

And Warren just keeps getting in digs. Her campaign is now selling mugs that read “BILLIONAIRE TEARS.” The nicer read: It’s an anti-elitism take on a well-worn meme that spans the political spectrum. The meaner interpretation, though, is that it’s a reference to Cooperman, who in an interview earlier this month on, yet again, CNBC grew emotional when talking about the 2020 election and Warren.

Last week, Warren’s campaign also unveiled a “calculator for billionaires” that lets people estimate how much they would pay under her wealth tax. It name-checks Cooperman specifically, as well as former New York City Mayor Michael Bloomberg, who is considering a presidential bid, and Microsoft co-founder Bill Gates, who joked about the wealth tax and asked whether Warren was “open-minded” to meeting with him last week.

Rich guys might be better off staying mum about Elizabeth Warren

There has been a plethora of stories about how Wall Street and rich people are afraid of Warren — including one I wrote — saying the choice between Warren and Trump is like the “decision between sickness and death” and calling her the one candidate who is “toxic for the business community.” And news outlets are leaning into it — why not get some comments from billionaires bashing a presidential candidate? But for their purposes, it would probably behoove guys like Cooperman to stop taking CNBC’s calls.

Warren and Bernie Sanders are the two most progressive candidates in the 2020 Democratic primary, and their bases are not, well, fans of billionaires. On the campaign trail, Warren talks about a “rigged system,” and Sanders has throughout his career railed against the “billionaire class.”

By playing up how much billionaires don’t like her, Warren is also playing up her progressive credentials as someone who is on the side of the little guy in the face of powerful interests. It might also be an attempt to appeal to voters who are also enticed by Sanders’ adversarial stance. Warren is pointing out that there’s a reason the Leon Coopermans and Jamie Dimons of the world don’t like her — they think if she is in the White House, she will make life harder for them. And they’re not the most sympathetic characters. But it appears many billionaires just can’t help themselves when it comes to criticizing her.

On Thursday, Blankfein, who has also been publicly sparring with Sanders for years and in 2016 was also shown in a Trump campaign ad, responded to Warren’s billionaire video on Twitter. “Not my candidate, but we align on many issues,” he wrote. He also made a thinly-veiled reference to Warren’s claims of Native American ancestry.