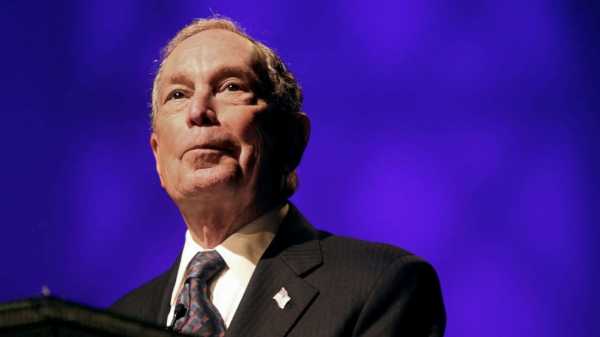 His team advises that he has still not formally announced his candidacy and maintain that this is among the things he has to do if he does decide to run.

«It does not mean he has made the decision to run,» Bloomberg spokesperson Stu Loeser told ABC News.

The 77-year old philanthropist’s move comes only days after former Massachusetts Gov. Deval Patrick, the first black chief executive in the Bay State, jumped into the contest last Thursday against the long odds he faces — adding more uncertainty into an already unsettled primary less than three months before the first votes are cast in the Iowa caucuses.

Bloomberg, should he officially run, would be launching a long-shot bid late in the primary season. But unlike Patrick, President Barack Obama’s close ally, Bloomberg has committed to funding his own campaign if he were to officially run, telling reporters earlier this month, «I’m going to finance a campaign — if there is one — with my own money so I don’t owe anybody anything.»

A self-funded campaign would likely mean the self-made billionaire wouldn’t be attempting to reach the donor threshold for the debates — a signal of a campaign’s grassroots strength in a cycle in which at least two of the front-runners are shunning big dollar fundraisers and the billionaire class.

Without a podium on a nationally-televised debate stage, Bloomberg’s uphill battle to compete might be a little steeper — a hurdle he acknowledged earlier this month when he said in Arkansas’ State Capitol after filing for the state’s ballot, «It costs a lot of money whether you’re doing it with your own money or somebody else’s money to get a message out. I remember in New York City, it was very hard to get a message out and that’s just one city. Now you’re talking about a whole country.»

Bloomberg’s likely late entrance into the next year’s contest 11 months into the primary would expand an already fractured field, which continues to grapple with anxieties over defeating President Donald Trump and an ascendant progressive wing pushing the Democratic contenders further left on health care, immigration, and guns.

Since the 2016 campaign, Bloomberg has repeatedly and openly scorched Trump and his agenda, calling him a «dangerous demagogue» at the Democratic National Convention as he put his full backing behind former Secretary of State Hillary Clinton.

He also recently said supporting the eventual Democratic nominee is «a very easy thing to say yes» to because of «who the Republican candidate is going to be.»

When asked by reporters earlier this month about his renewed considerations and if they reflect his concerns over former Vice President Joe Biden and the rest of the field being weak, Bloomberg deflected, instead responding, «Joe Biden is a very nice guy. I’ve known him for a long time, and if you want to know about Joe Biden, you got to talk to Joe Biden, he’s running his campaign. I’m running mine and one thing doesn’t necessarily have anything to do with another.»

But up against the push to the left, Bloomberg, if he were to enter the crowded field, would likely face questions from his Democratic rivals about being a former Republican, who endorsed then-President George Bush in 2004 at the Republican National Convention. Bloomberg was also previously an Independent after his stint as a member of the GOP during his election for mayor, but he re-registered as a Democrat last year, a move many interpreted as a strong indication of his interest in a presidential bid.

«Today, I have re-registered as a Democrat — I had been a member for most of my life — because we need Democrats to provide the checks and balance our nation so badly needs,» he said at the time. Two months later, Bloomberg reportedly held meetings with top Iowa Democrats during a multi-city tour through the first state that have a say in the presidential race, before ultimately ruling out a bid.

«I believe I would defeat Donald Trump in a general election. But I am clear-eyed about the difficulty of winning the Democratic nomination in such a crowded field,» he wrote in an op-ed in early March.

Bloomberg recently inched closer and closer to a formal bid by filing in Alabama and traveling to file in person in Arkansas and mailed in a filing in Texas — three southern states with primaries on March 3, 2020, and seeking to gain ballot access in Tennessee, another Super Tuesday state. He is also on the ballot in Michigan and Georgia.

His team continues to play coy about whether he will seek to get on the early states’ ballots, but his aides previously said he won’t «compete» in at least New Hampshire. Bloomberg did not file in the Granite State, which would keep him out of the game for the first-in-the-nation primary state. And since Iowa uses the caucus system, there is no filing deadline.

Bloomberg’s wait-and-see approach on the sidelines didn’t stop him from spending in the presidential contest. Digital ads targeting Trump for his behavior, such as his «tantrums» and «lies,» started running on Facebook recently.

(MORE: The NH primary ballot is official and Bloomberg isn’t on it)

While the ads, part of a staggering $100 million digital ad blitz first reported by the New York Times, don’t feature Bloomberg, they showed the disclaimer «paid for by Mike Bloomberg 2020,» and directed users to a sign up page that urges them to «join the fight.»

Bloomberg continues to pour millions into the 2020 contest, as he plans to spend between an estimated $15 million and $20 million on a voter registration effort to challenge President Trump in five key battlegrounds that could define the outcome of next year’s election.

Following his $100 million digital campaign targeting Trump’s behavior, a spokesperson for Bloomberg confirms the former mayor of New York will roll out a new push to register half a million Democratically-leaning, minority and underrepresented voters, including African Americans, Latinos, Asians, rural Americans and the youth voting bloc, in early 2020 .

The new drive will kick off across Arizona, Michigan, North Carolina, Texas and Wisconsin but could expand into other states.

But perhaps in his most consequential step towards running for office, Bloomberg apologized for his longstanding and vehement support for «stop-and-frisk» policing on Sunday — a stunning reversal for the former mayor who vigorously defended the policy throughout his tenure, which began in 2001, a few weeks after the Sept. 11 terror attacks.

The New York Times reported in 2010 that at the height of the program, «of 575,000 stops conducted in 2009, black and Latino people were nine times as likely as white people to be targeted by the police.» Bloomberg continued to stand by the policy for years, even after a federal judge ruled the policy unconstitutional for being racially discriminatory.

Bloomberg’s change of heart appeared to be an acknowledgement his stance was a lingering rift with the African American community — and a significant hurdle if he aims to make inroads with black voters, a core constituency of the Democratic base.

It also was a sharp reversal from earlier this year, when he elaborated further on his decision to not run for president at a Bermuda Executive Forum talk in New York and asserted he wasn’t interested in going on «an apology tour» about previous views.

«It’s just not going to happen on a national level for somebody like me starting where I am unless I was willing to change all my views and go on what CNN called an apology tour,» he said. «Joe Biden went out and apologized for being male, over 50, white. He apologized for the one piece of legislation which is actually a pretty good anti-crime bill, which if the liberals ever read it, most of the things they like is in that bill. They should have loved that, but they didn’t even bother to read it. You’re anti-crime, you must be anti-populist.»

But on the heels of his apology, Bloomberg scored one of South Carolina’s most coveted endorsements from Columbia’s Mayor Steve Benjamin, according to the Post and Courier, if he chooses to run.

«If Michael Bloomberg jumps into the presidential race this week, I plan to support him,» Benjamin said.

Amid speculation that he was eyeing a late entry, Bloomberg was criticized by some of the other presidential candidates, particularly, by the progressive duo of Sens. Bernie Sanders, I-Vt., and Elizabeth Warren, D-Mass., before he even jumped in the race.

«Our approach toward politics a little bit different than Michael Bloomberg’s, just a little bit» Sanders said in Washington, D.C. on November 12. «And that is why we win. We win because, at the end of the day, what is most important is the kind of grassroots support.»

«I believe that what our election should be about is grassroots — how you build something all across New Hampshire, all across the country,» Warren said in New Hampshire last week. «And that we really shouldn’t have elections that are about billionaires calling all the shots, whether they’re reaching in their pockets to fund their own elections, or whether they’re counting on getting other people to run.»

(MORE: Trump says he’d be ‘happy’ to run against Bloomberg for president)

But some of the hardest criticism came from Bloomberg’s successor, New York City Mayor and former 2020 candidate Bill de Blasio, who said he should not be the nominee because, «there’s no way in the world we should nominate a billionaire who epitomizes the status quo.»

But beyond his fellow rivals, Bloomberg will likely face a steep uphill climb as he tests whether voters are still open to another option in an already crowded field.

A Monmouth poll released on Nov. 6 found that the vast majority of Democrats, 74%, are satisfied with the current field of candidates.

And in Iowa, among likely Democratic caucusgoers, Bloomberg’s favorable rating dropped eight points from March, while his unfavorable ratings saw a sharp increase to 58%, according to a new Des Moines Register/CNN/Mediacom poll.