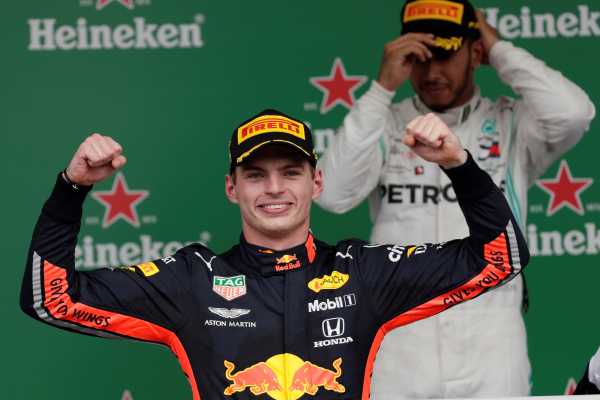 Lewis Hamilton finished only fifth as Sebastian Vettel led a Ferrari one-two in practice for the Brazilian Grand Prix.

After the opening track session at Interlagos took place in damp conditions – with Red Bull’s Alex Albon setting the pace before crashing out – Ferrari held the advantage in the dry.

Hamilton, who closed out his sixth world championship in Texas a fortnight ago, ended the running 0.223secs adrift of Vettel.

Ferrari were off the pace in Austin as Leclerc finished a distant fourth, almost one minute behind race victor Bottas, while Vettel failed to get to the chequered flag following a rear suspension failure.

But the Scuderia, who have largely boasted the grid’s speediest package since the summer break, appear to be in a strong position heading into the remainder of the weekend at the penultimate round of the campaign.

Hamilton may have already wrapped up the title that moved him to within one of Michael Schumacher’s record collection of seven.Mercedes driver Lewis Hamilton had to settle for fifth place in practice (Nelson Antoine/AP).

But the Englishman, 34, will be keen to end his latest world championship-winning campaign in good form as he bids to match Schumacher’s tally in 2020.

Albon fell foul to the tricky conditions in the first running, crashing out at the final long-sweeping left hander to the start-finish line and damaging his Red Bull.

He was able to participate in the day’s concluding action, but finished only ninth, one second off Vettel’s pace.

Robert Kubica, the Pole who will depart the sport for good at the year’s final round in Abu Dhabi following a heroic yet disappointing comeback, was rested for the first session, with Williams reserve driver Nicholas Latifi taking his place.

Kubica returned for second practice, but crashed out on his very first flying lap, losing control of his Williams through the Senna Esses before ending up in the wall.

The running was red-flagged as Kubica’s stricken Williams was recovered. He would play no further part.

The red flags were deployed for a second time with five minutes left when Toro Rosso’s Daniil Kvyat fell off the track in a carbon-copy accident to Albon.