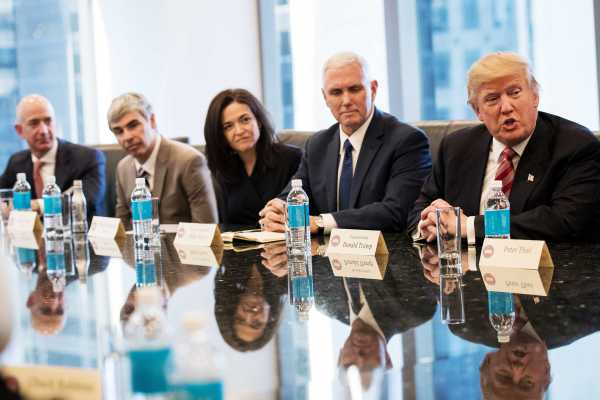 Facebook is making millions off of impeachment ads from Trump, his allies, and his adversaries.

Share
All sharing options for:
How Donald Trump is using Facebook to amplify his fight against impeachment

Donald Trump is angry about impeachment and he wants his supporters to be, too — and he’s spending millions of dollars to make that happen.

Trump’s campaign is leaning heavily into Facebook advertising in his reelection bid, including when it comes to defending him against House Democrats’ ongoing impeachment inquiry. Since his first Facebook ad on the subject in September, Trump has spent about $1.6 million on Facebook posts addressing impeachment — his most expensive topic besides himself.

And instead of trying to persuade voters who live in the states that will decide 2020, he appears to instead be trying to rile up his base (and get their information if he doesn’t already have it). His campaign is using Facebook ads as a way to reinforce the narrative cycle from the White House, Republican lawmakers, and conservative media that impeachment is a political plot against the president by Democrats. His ads, by and large, don’t deal with the substance of the allegations — that he and his administration tried to leverage US foreign policy to convince Ukraine to investigate a personal political rival — and instead push conspiracies. They are a way for the president’s reelection campaign to build voter lists, streamline in potential volunteers and donors, and keep public opinion from swinging too far out of Trump’s favor. 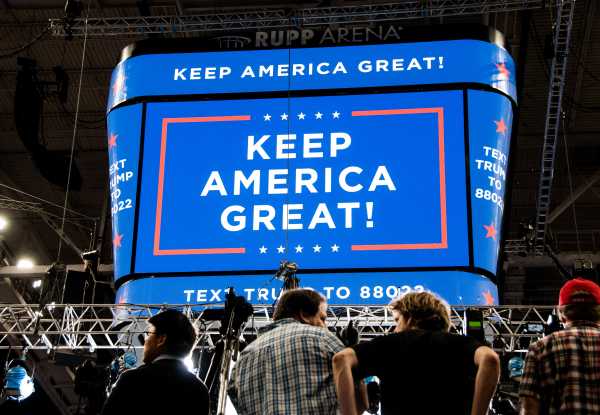 More broadly, Trump’s impeachment strategy on Facebook highlights the enormous amount of resources he has not only to fight back against Democrats in Congress but also his eventual 2020 Democratic presidential opponent.

“This is a battle over public opinion,” said David Gergen, an adviser to four presidents, including the two who most recently faced impeachment, Richard Nixon and Bill Clinton.

Facebook itself has grown into a formidable political platform in recent years, with campaigns and outside groups spending $284 million on the platform during the midterm elections, according to a report by Tech for Campaigns, a nonprofit that helps political campaigns with digital tools. While that’s just a small share of Facebook’s overall ad revenue, it’s a growing chunk of what campaigns are spending to reach constituents.

The site itself is a place of rampant political disinformation, providing a platform for fake news to flourish and even for foreign actors to actively try to impact a US election. More recently, Facebook CEO Mark Zuckerberg has doubled down on allowing politicians to circulate political ads with lies, with predictably disastrous results. In October, Facebook was criticized for refusing to take down a Trump ad that falsely accused former vice president Joe Biden of promising Ukraine money for firing a prosecutor investigating a company with ties to Biden’s son, Hunter Biden. Recode used Facebook ad data collected by Democratic consultancy Bully Pulpit Interactive to decipher how much Trump is spending, who he’s talking to, and what kind of messaging he’s using when it comes to impeachment. We also looked at what some of the other big spenders on impeachment advertising are saying. On an already divisive issue, it seems Facebook users are seeing ads designed to divide them even more. This is how Facebook has always functioned, despite promises to improve, including after the 2016 election.

“The battle lines are pretty drawn here between Republicans and Democrats, particularly around impeachment,” said Daniel Kreiss, an associate professor at the University of North Carolina’s School of Media and Journalism.

Trump is talking about impeachment to older voters in big states 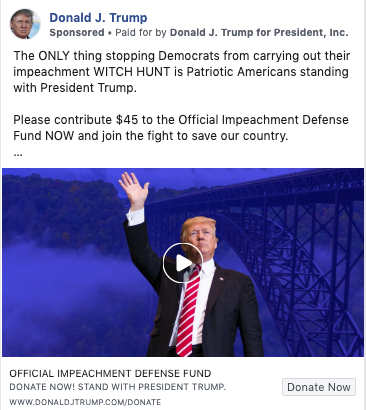 The next day, Trump spent the most on a single impeachment-related Facebook ad buy, $335,430. The ad posed the impeachment as an effort to “take YOUR VOTE away.”

Since running that first ad, Trump has spent a small fortune on impeachment ads — nearly 30 percent of his total Facebook ad spend in that time. He’s geared that spending toward the most populous — though not likely to flip — states: Texas, California, Florida, and New York.

When people click through on the ad, most of the time they’re asked to input their name, zip code, email address, and phone number — information that will get them into the Trump campaign’s database. It’s part of the Trump campaign’s “engagement ladder,” said Rory McShane, a Republican political consultant, for later sending emails asking for donations and potentially getting backers to volunteer for the campaign, knocking on doors or making phone calls, and later to ultimately vote. 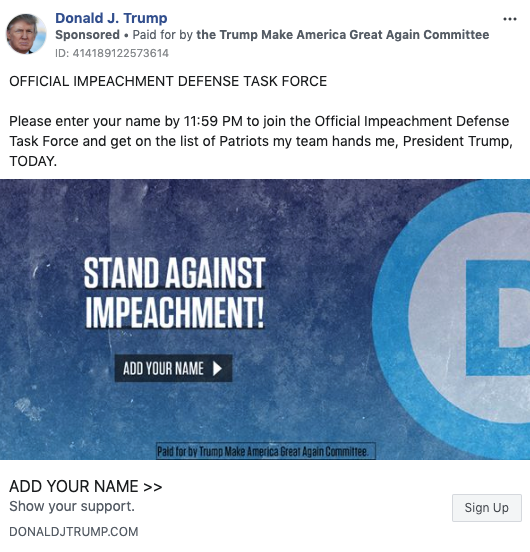 “He views the impeachment messaging as a way to fire up his supporters and mobilize his base,” Kreiss said. “Digital ads are huge mobilization and organizational tools, particularly at this stage in the race.”

What Trump is not doing is focusing impeachment ads — or Facebook ads in general — at the voters in the states that helped him win the electoral college in 2016 and will probably matter again in 2020, such as Wisconsin and Michigan. Part of the explanation is that it’s really early to be spending money on persuasion ads. But Trump is also testing out messaging that he might eventually use to target people in those states to see what resonates most with different demographics. Given how polarized an era we live in, campaigns such as Trump’s lean heavily into trying to get people who already like him engaged and out to vote, and getting them riled up helps that. And that’s what Facebook’s algorithm is built to do: keep people engaged, often with content that reinforces their views or prompts a strong reaction.

“This goes to the changing American electoral strategy” of motivating the base rather than targeting people who might be persuaded, McShane said. “The swing voter is dead.”

“It’s easier to rile up the bases than it used to be,” said Matt Grossmann, a political science professor at Michigan State University.

Trump has basically one strategy for his presidency: fight back all the time and cede no ground to his critics. On impeachment, it’s no different. His message has been that this is a political ploy by Democrats to undermine him and that he’s done nothing wrong, despite evidence, including witness testimony and a transcript released by the White House itself, that Trump withheld US military aid to Ukraine in an effort to pressure Ukrainian President Zelensky to open investigations into former Vice President Joe Biden and his son, Hunter Biden.

According to a FiveThirtyEight average of impeachment polling, 48 percent of Americans support impeaching Trump and 44 percent oppose. When you break that down by party, 83 percent of Democrats, 44 percent of independents, and 10 percent of Republicans support impeachment. That support has grown in the almost two months since Pelosi announced the inquiry, and if public opinion swings more in favor of impeachment than it is currently, that could make it easier for Republicans to vote against the president and alleviate some of the pressure on moderate Democrats from their constituents. But Trump has an elaborate apparatus in the Republican Party and outlets such as Fox News to back him up. Facebook is just one more bulwark.

Kyle Kondik, managing editor of Sabato’s Crystal Ball at the University of Virginia Center for Politics, said that Trump’s strategy on impeachment puts pressure on Republicans to hold the line. The House, in which Democrats have a majority, ultimately decides whether to impeach Trump, and a two-thirds vote in the Senate, which Republicans control, would be required to convict him and remove him from office.

Politico reported in October that Trump is using the promise of fundraising help for Republican senators in the hope of keeping them in line.

“It’s not only about making sure that Republican base voters are motivated to vote in the general election but also to make sure that those voters will side with Trump over any dissident House or Senate Republicans who might cross the president,” Kondik said.

Incumbent presidents always have an advantage over their opponents. Barack Obama did in 2012 and Trump does now. And he is taking advantage of it.

Trump filed for reelection on the day of his inauguration in 2017 and has never really stopped running for president. He also has a vast campaign infrastructure and millions upon millions of dollars behind him. At the end of the third quarter of this year, his campaign had $83 million in cash on hand. The best-funded Democratic candidate, Bernie Sanders, has $33 million.

By the time there is an actual Democratic nominee next summer, Trump will have been running for reelection for three-and-a-half years. With Facebook ads, his campaign is figuring out what does and doesn’t work with voters and supporters, including on impeachment.

Trump is also facing a different scenario from Nixon and Clinton. Neither was running for reelection during impeachment processes against them — and neither had so much cash with which to push back. “He’s had much more of a big-money, big-advertising campaign than we saw with either Nixon or Clinton,” Gergen said.

Lots of people are running Facebook ads on impeachment

And much like Trump, each group’s messaging and targeting around impeachment reveals information about their broader strategies.

Need to Impeach is the biggest spender on Facebook impeachment ads at $1.8 million since March, (though its spending has slowed down since Steyer entered the presidential race and started directing his resources elsewhere). More than half of its ad spend is targeted at people under the age of 35. 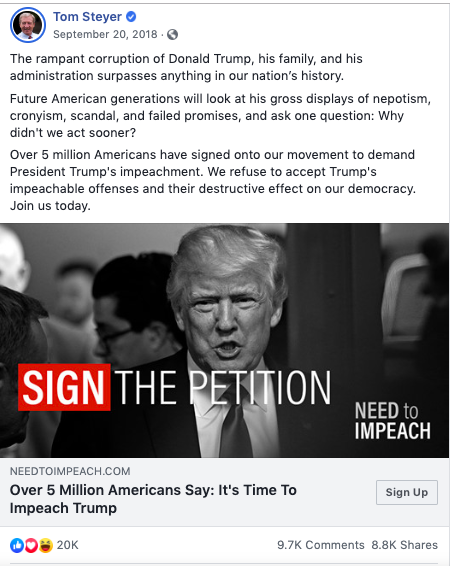 Steyer himself has spent almost $700,000 on impeachment ads, starting soon after he announced he would run in July. Three of the four states he’s spending the most in are early primary states in the 2020 presidential race — South Carolina, Iowa, and Nevada — an indicator he’s trying to persuade Democratic voters there and remind them he’s been on the impeachment train for a long time. Warren, who called for Trump’s impeachment after the release of special counsel Robert Mueller’s report this spring, is dedicating most of her Facebook impeachment spend to states with a lot of people. She’s list-building. And while her original messaging was around the Mueller report, she is now also running ads on the current impeachment inquiry in Congress. 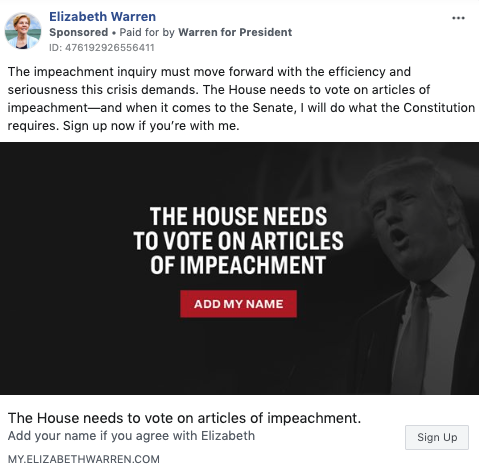 Acronym, which is planning on a $75 million digital ad campaign to counter Trump this election cycle, is targeting the states Democrats most need to win if they want to defeat him next year: Pennsylvania, North Carolina, Arizona, Michigan, and Wisconsin. They’re trying to head off some of Trump’s incumbent advantage while the 2020 candidates duke it out in the primary. “We can’t afford not to do this work right now,” Acronym CEO Tara McGowan recently told the New York Times. Their ads are largely advancing Democratic arguments on impeachment — that Trump asked the Ukrainian president to interfere in US elections and there is support for an inquiry.

On the Republican end of things, America First Policies has been running Facebook ads aimed at many Democratic members of Congress whose seats Republicans are trying to flip in 2020. It has also run ads telling people in Florida, which Trump won in 2016, to “help stop the impeachment plot” and register to vote. McConnell, like Warren and Trump, seems to be more list-building and base-riling than he is voter-persuading — he’s spending the most on ads in Texas, Florida, California, New York, and Ohio (his home state of Kentucky, where he’s up for reelection in 2020, is his ninth-biggest spend), and his ads are attacking House Majority Leader Nancy Pelosi (D-CA) and hyping up the importance of keeping the Republican majority in the Senate to stop Democrats. 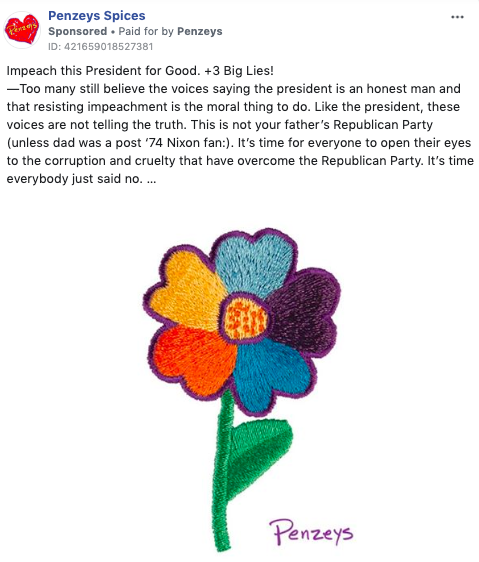 And then there’s Penzeys, the Wisconsin-based spice company that has raised eyebrows with its heavy spending on Facebook ads on impeachment. The ads are a mix of product offerings, email list sign-ups, and swipes at Trump. And owner Bill Penzey says the messages are playing with customers. “The reason we spent so much is that this ad has worked better than any ad we’ve ever placed,” he told Fox Business in October.

It appears Facebook impeachment ads are a winning game for a lot of people — or at least they’re hoping so.