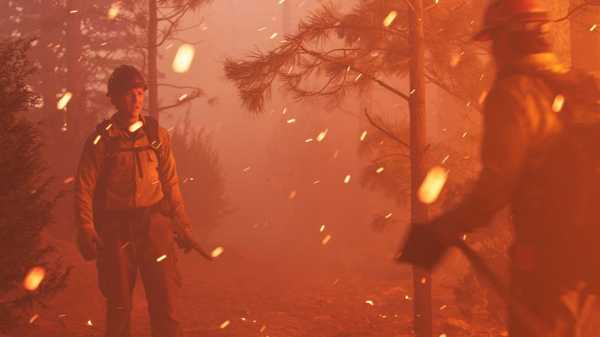 The art of storytelling is treacherous, and the new film “Only the
Brave,” released last Friday, is among the more noteworthy recent
displays of the art’s peculiarities and pitfalls. The movie is a
stirring dramatization, directed by Joseph Kosinski, based on a
nonfiction account in GQ by Sean Flynn (and co-produced by Condé Nast
Entertainment), of the real-life activities of the Granite Mountain
Hotshots, heroic fighters of wildfires in Arizona. Yet it also offers a
timely reminder that stories are decisions, that there’s no such thing
as “the story,” no preëxisting idea or self-determined material that
belongs in a movie by dint of its chosen subject or characters. The
decisions that go into the composition and the telling of stories have a
meaning of their own and—as in “Only the Brave”—what filmmakers leave
out can be far more revealing than what they choose to include.

The action of “Only the Brave” is centered on Eric Marsh (Josh Brolin),
the rugged, volatile, insightful, deeply capable superintendent of a
wildfire-fighting outfit in Prescott, Arizona, that’s relegated to Type
2 status. That legal designation means that, despite Eric’s profound
understanding of the best way to fight wildfires, his crew must follow
the orders of certified Type 1 (a.k.a. “Hotshot”) units and merely
complete the jobs that they have started. As a municipal company, the
Prescott outfit has little chance to compete for Hotshot standing; but
the local fire chief, Duane Steinbrink (Jeff Bridges, in a performance
rich in wry humor and lived-in wisdom), vouches for them to the mayor
(Forrest Fyre), and Eric is authorized to seek Type 1 certification for
his company. Meanwhile, a young man named Brendan McDonough (Miles
Teller), a slacker and a stoner, has gotten a young woman (Natalie Hall)
pregnant. She has no interest in him or in his help raising the child;
but, having grown up without his own father, Brendan is determined to
pitch in, and, in order to get his life together, applies for a job with
the firefighters.

The script, by Ken Nolan and Eric Warren Singer, puts exceptional
emphasis on Eric and Brendan’s personal lives. Eric, for his part, is in a
passionate marriage with Amanda (Jennifer Connelly), a horse trainer,
but something troubled in their past shadows their daily lives. (It
surges to the surface of the action only very late in the film, when the
couple’s stifled conflicts burst forth with some trenchant writing
delivered with familiar histrionics.) Brendan is first seen as a young
fool, getting into fights, getting arrested, getting kicked out of his
mother’s house. When he is hired as a firefighter, the other members of
the outfit see him as physically and mentally unfit (they give him the
nickname “Donut”), but Donut masters the necessary tough physical
discipline and the book studies and becomes an integral part of the
unit. The movie also gives both men a foil. Eric’s is his
second-in-command, Jesse Steed (James Badge Dale), who provides a model
of ordinary family life that contrasts with Eric’s own. Donut’s foil is
Mac (Taylor Kitsch), a sexually crude and emotionally stunted colleague
who is also Donut’s most vicious harasser. (Of course, he and Donut
become close friends, and Mac matures, largely through Donut’s
influence.)

“Only the Brave” is filled with conspicuous touches of heartiness, of
bonding (male bonding) that’s part of the discipline and the teamwork
required to face danger practically and get the job done. The movie
offers a vision of sentimental unity for the common good in a town where
people—white people—go out of their way to help each other. Yet as I
watched the movie, I felt that something was missing (including the
possibility that there might be anyone besides white people in Prescott).
“Only the Brave” ties the characters’ private lives to their work lives
in a plethora of details, but it never looks beyond the work life into
life at large, or even into the life that surrounds them in their own
home town. After the viewing, prompted by curiosity, I looked (very
casually, just a few minutes’ click-around) at news about the Hotshots
and turned up an entire realm of activity that’s integral to their lives
yet is excluded from the movie, and that is at least as interesting
regarding them—and about their locale and American times at
large—as anything in the movie. In short, “Only the Brave” comes off as
stirring, effective, patriotic propaganda for a picture of America that
is itself merely a one-sidedly useful artifice.

This is the place for a spoiler alert, which, however, won’t be a spoiler
for anyone who has read anything about the real-life Granite Mountain
Hotshots. As depicted in the movie, nineteen of the twenty members of
the company died, on June 30, 2013, while fighting a wildfire, and Donut
is the sole survivor. The tail credits state the names of the other
members of the company, the sixteen whose characters aren’t developed in
the film. A cursory search for one of them, Joe Thurston, turned up a Prescott News article from June 7, 2016, headlined “Prescott Approves Survivor Benefits for Widow of Wildland
Firefighter Joe Thurston.” “The criteria were the same as those applied
during previous hearings where benefits were awarded to three other
wildland firefighters lost on June 30, 2013,” the piece reads. What’s
hidden in plain sight in this report is that, for nearly three years,
benefits had been withheld from Thurston’s widow, Marsena, and other
women who lost their husbands in the disaster.

It turns out that, just a few weeks after the tragedy, one widow,
Juliann Ashcraft, the spouse of the late firefighter Andrew Ashcraft,
complained that she was being denied benefits; soon others did so, too. Because the town of Prescott deemed some of its firefighters to be “temporary” or “seasonal,” those victims’ families were denied the benefits that were being
received by the families of permanent or full-time employees. (Some
surviving family members also sued the town for three hundred million
dollars in damages.) What’s more, several of the movie’s main characters were involved in the dispute:

Hotshot leader Eric Marsh’s widow, Amanda, remembers her husband talking about how Prescott officials held back on Andrew Ashcraft when he became full-time.

These disputes soon grew more bitter, more complicated, and more
political, as Fernanda Santos reported in 2014, in the Times. When some of the widows sought the benefits
that were being denied them, “city officials fueled only hostility,
telling residents and municipal workers that taxes might need to go up
and raises be delayed for another year because of what the deaths had
already cost, according to several people involved in these discussions,
who requested anonymity for fear of reprisal.”

Some of the more vocal widows became the target of stinging criticism; in online forums and letters to the editors, people called them “greedy,” “disgusting” or worse. Juliann Ashcraft decided to leave Prescott altogether to spare her four children the discomfort of whispers and glares.  . . .  As a result of the dispute, there were two separate memorial services held for the fallen firefighters—one organized by their union, one run by the city of Prescott.

Nothing of the sort is even hinted at in “Only the Brave.” The movie has
no more room for discussions between Eric and Amanda about the
employment status of the men under his command than it does for the
disputes that arose after the tragedy and that drove the town—seemingly
unified in its grief and mourning—into open conflict. Much is made in
“Only the Brave” about Prescott’s point of pride that the Granite
Mountain Hotshots was the first and only municipal Type 1 outfit in the
United States; nothing at all suggests that Prescott may have been
attempting to get that honor on the cheap. The battles that the
Hotshots’ widows have faced over health insurance, taxes, labor law, and
budgets, involving the online harassment of women, are—without a word
about party identification or political campaigns—at least as crucial
and exemplary a vision of contemporary American life as the tale of the
firefighters’ courage and self-sacrifice.

I wrote here last week about the exclusions, the prejudices, the blinkered points of view that
are embodied in the storytelling methods of classic Hollywood movies,
and how narrow narrative designs are methods for keeping uncomfortable
truths offscreen in the interest of a so-called mainstream. “Only the
Brave” is spare, clear, direct storytelling—and the tightly bounded
precision of its form, giving rise to its emotional efficiency and
psychological specificity, seals the movie off from the fuller range of
concerns, the connections to contemporary life and societal currents at
large, that are inseparable from the real-life story that it is telling.
To expand the content of “Only the Brave” would entail expanding its
form; as is, the nostalgic virtues of its classical storytelling, with
its emphasis on individual initiative and private conflicts in isolation
from the community, conceal and reflect other sorts of nostalgia—a
yearning for a less complex and more homogeneous society that, I
suspect, was the furthest thing from the filmmakers’ intentions.