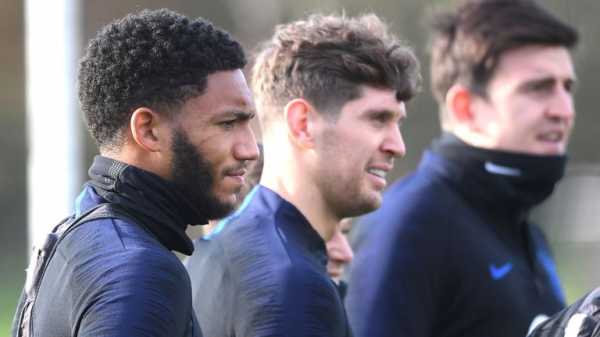 «If the Euros were to start tomorrow, everything suggests that Southgate would partner John Stones with Harry Maguire. Stones is the most experienced partner for Maguire having played at the World Cup in 2018, but there are other centre-backs playing well at the moment.

«There’s Tyrone Mings, who played in Kosovo but doesn’t have the same level of international experience as Stones. Then there’s Fikayo Tomori, one of the Premier League’s in-form defenders at Chelsea.

«Michael Keane dropped out of the latest England squad, but he is still in the picture, and then there’s Joe Gomez, who would have featured in Kosovo had it not been for that injury he picked up before the team flew out.

Who holds the key in midfield? 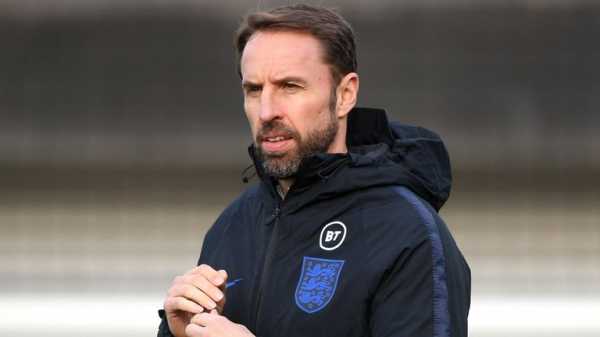 1:31 Kaveh Solhekol guides us through which midfielders England manager Gareth Southgate could pick in his Euro 2020 squad.

«Since the World Cup in Russia, Southgate has used 12 different midfielders — that’s right, 12! But there’s still a big debate as to who will play that crucial holding midfielder role?

«Harry Winks is in the driving seat for that position. Declan Rice can also play there, as can Fabian Delph and, of course, Eric Dier, who was so crucial for England at the World Cup and has captained the team under Southgate.

«If Dier can get fit and play regularly at Tottenham, he is a possibility, but that position looks to be Winks’ at the moment. It’s not one suited to Jordan Henderson, but he looks certain to start at the Euros next summer, be that on the right or left of midfield. 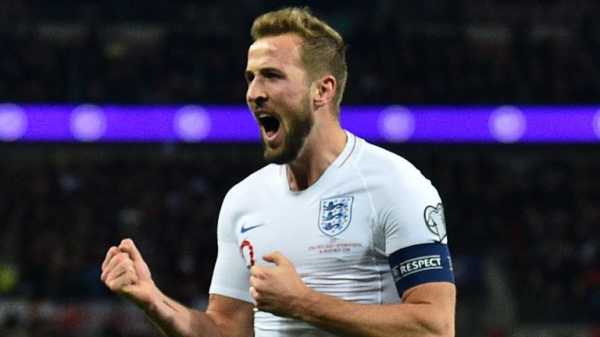 1:19 Kaveh Solhekol says England manager Gareth Southgate has an easy decision to make when it comes to selecting his attacking players.

«In terms of the front three, Harry Kane and Raheem Sterling are in there with Marcus Rashford, at the moment.

«Rashford’s place could be under threat from Jadon Sancho, a couple of months ago he was ahead of him but he is enduring a difficult time at Borussia Dortmund at the moment and Rashford has come back into form.

«Callum Hudson-Odoi is playing well and as more opportunities present themselves at Chelsea, he will keep knocking on the door.

«But that front three of Kane, Sterling and Rashford is one of the best in world football and Southgate’s first choice.» 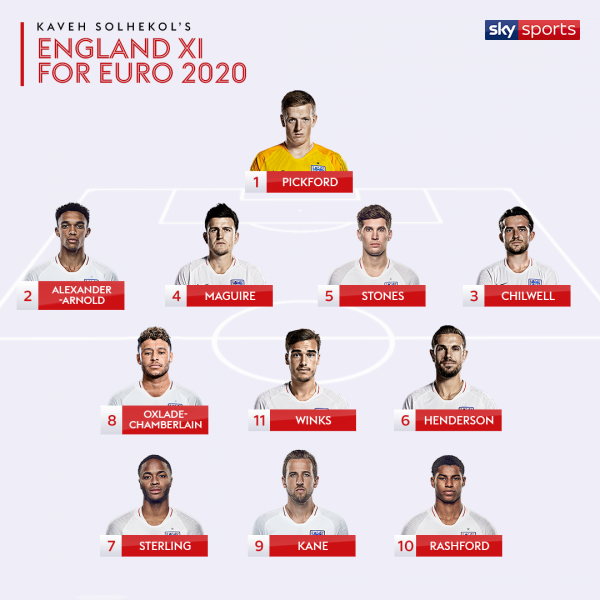 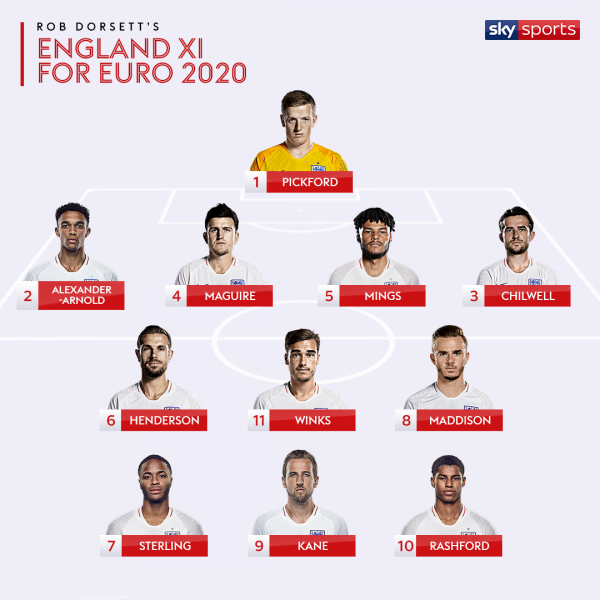 «Nick Pope made his debut in Kosovo and while he and Tom Heaton are challenging, Jordan Pickford remains in possession of the No 1 shirt and should start.

«The last couple of European Qualifiers seem to have settled the debate over the full-backs. Trent Alexander-Arnold and Ben Chilwell are the future, with Kieran Trippier and Danny Rose the back-ups. 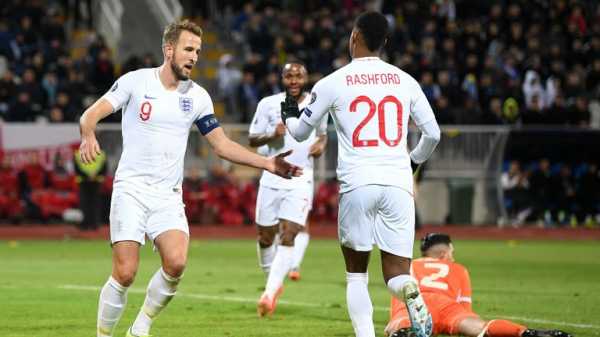 3:27 Highlights of England’s 4-0 win over Kosovo in their final Euro 2020 qualifying match.

«It’s in the middle where the questions lie. Harry Maguire seems to have cemented his place, but who do you playing alongside him? For me, it has to be Joe Gomez, though I’m sure Southgate will want to build that partnership in the friendlies before the Euros next year.

«Alex Oxlade-Chamberlain would be my pick on the right of a three-man midfield. He gives you something different with his ability to get up and down, his goalscoring threat and he’s very good technically.

«The problems occur at the base, should England go down the route most countries go down and opt for that pivotal midfielder that keeps things ticking over — Harry Winks — or do they take the defensive option — Declan Rice? 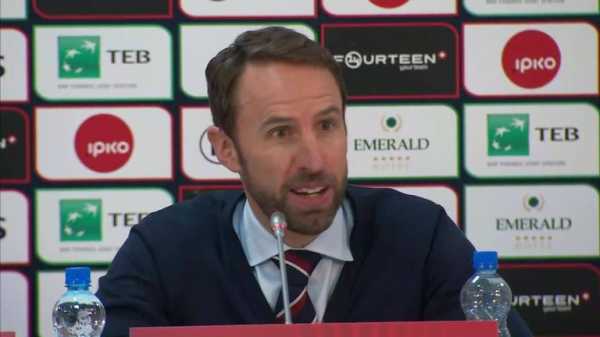 0:49 Better than 2018? Gareth Southgate believes his England team have made big improvements over the last two years and wants further progression ahead of Euro 2020.

«You can play both of them together, so I’d go for Winks in the middle with Jordan Henderson on the other side. He’s the dominant, captain-like figure in the squad and can offer protection if needed.

«Then there’s the front three, which picks itself. Marcus Rashford is in great form at the moment and is ahead of Jadon Sancho, hopefully that continues for England and Manchester United into 2020. Then we’ve got Raheem Sterling on the other side of Harry Kane.

«We’re blessed in that area of the pitch so hopefully they are in good form and fit when it comes to crunch.» 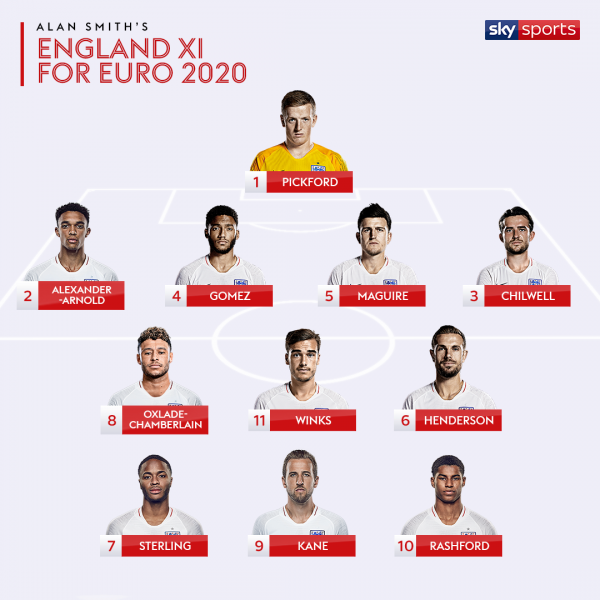 Pick your England XI for Euro 2020

And now it’s over to you. Who should line up for England in their opening game at Euro 2020? Pick your XI below…