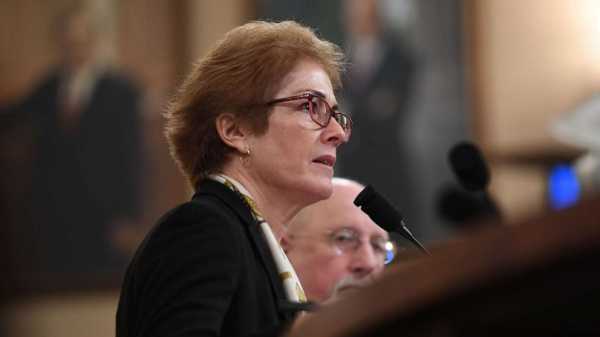 Following the conclusion of the second public hearing amid the House impeachment inquiry, Republicans and Democrats were split on how the day’s events progressed, especially with respect to the impact of President Donald Trump’s tweets attacking former Ukraine Amb. Marie Yovanovitch as the hearing was set to begin.

Speaking to reporters after the hearing ended Friday, when asked whether the president’s tweets attacking Yovanovitch could potentially be considered impeachable — as obstruction of justice or an abuse of power — House Intelligence Chairman Adam Schiff, D-Calif, called the tweets part of a «pattern to intimidate witnesses.» Former Ambassador to the Ukraine Marie Yovanovitch testifies before the House Permanent Select Committee on Intelligence as part of the impeachment inquiry into President Donald Trump, on Capitol Hill, Nov. 15, 2019, in Washington.

«This is part of a pattern [of] the president of the United States — a pattern that goes back to praising Paul Manafort for not cooperating, condemning Michael Cohen as a rat because he was cooperating with authorities — attacking other witnesses who come forward suggesting that we ought to treat those like the whistleblower who exposed wrongdoing in his administration as we treat traitors and spies. And we used to execute traitors and spies,» Schiff said. «And it’s also part of a pattern to obstruct the investigation. And so we need to view the president’s actions today as part of a broader and incriminating pattern of conduct.»

Schiff called Yovanovich «an incredible public servant,» adding he was «grateful» for her testimony.

«That she had to endure yet another attack today even as she was testifying with the President of the United States is just appalling,» Schiff blasted. «But as we have observed so often, appalling in this administration is not the least bit surprising.» He said Yovanovitch’s testimony showed that Rudy Giuliani, the president’s personal lawyer, and Trump «felt it was necessary to get her out of the way.»

«If there were any doubt about why she was pushed out, I think the call record eliminates that doubt,» Schiff said. «That a U.S. Ambassador would be so shamelessly smeared and cast aside to further this corrupt effort just adds further insult to the injury done to the country and to our national security.»

Schiff said he’s «not prepared to say» whether Fiona Hill, who is set to testify publicly on Thursday, will be the committee’s final witness.

«We are moving expeditiously but we are trying to move methodically,» he explained.

She added, «This is wishful political thinking by the Democrats.» 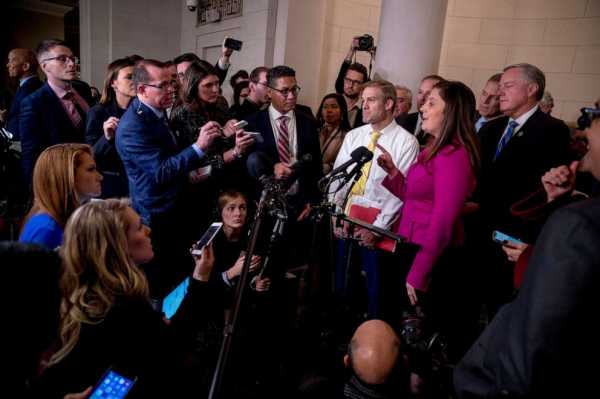 Republicans attempted to underscore «the facts» at the heart of the Ukraine matter.

«Four facts have never changed, will never change,» Ohio Rep. Jim Jordan said. «We’ve got the call transcript. There was no conditionality or linkage on the call between an investigation, security assistance. We have the two individuals on the call who both said that there was no pressure, no linkage.»

He added, «We know that the Ukrainians didn’t even know aid was withheld or on hold at the time of the call. And most importantly, the Ukrainians — specifically President Zelenskiy — never took any official action to get the aid released.»

Stefanik called the hearing «an abject failure of Adam Schiff and his regime of secrecy.»

«As we saw today, he is making up the rules as he goes,» Stefanik asserted. «He did not let Republicans put forth any unanimous consents. He did not let us control our own time, Republican members’ time. I think I was interrupted about six times throughout the hearing. So this is just more the ridiculous abuse of power we’re seeing from Adam Schiff.»

Jordan and Stefanik both declined to say whether they agreed with Trump’s decision to remove Yovanovitch from her post, but Stefanik also stressed that the president can appoint ambassadors at their own will. She pledged to continue seeking answers about Hunter Biden’s role on the board of directors for Burisma.

Republicans continued to chase Schiff for initially expressing an interest in hearing directly from the anonymous whistleblower.