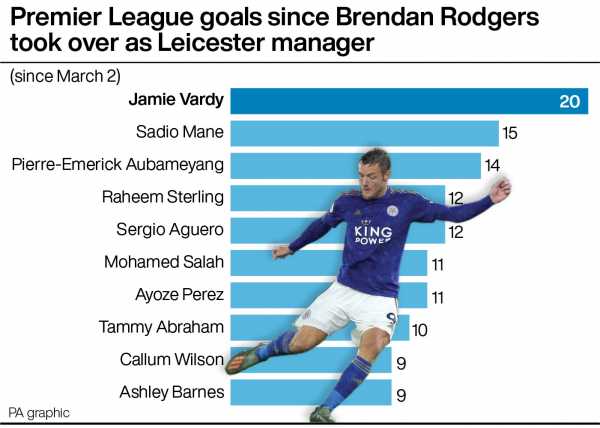 Leicester are second in the Premier League and in the title race for the first time since they won a shock crown in 2016.

Here, the PA news agency looks what has gone right for the Foxes this season.

It is not yet Rodgers’ team, which has made his work all the more impressive. Having taken the reins in late February, the Northern Irishman inherited a squad frustrated with Claude Puel’s tactics and sitting 12th after losing 4-1 at home to Crystal Palace. Of the regular line-up only Ayoze Perez, who joined from Newcastle for £30million, has been a true Rodgers buy given Youri Tielemans had already been on loan at the club before Rodgers’ arrival. If there was anything to prove following the disappointing end to his Liverpool tenure, Rodgers has done it.

The striker has been in red-hot form since Rodgers took over, scoring 20 times in 23 matches under the former Celtic boss. His strike-rate is better under Rodgers than any previous Leicester manager, including Claudio Ranieri. Vardy, who called time on his England career in August 2018, turns 33 in January and shows no signs of slowing down.

Tottenham, Manchester United and Arsenal have failed to live up to expectations this term. Leicester dispatched the Gunners 2-0 with minimum fuss on Saturday – Vardy scoring his ninth goal in nine starts against them. United and Tottenham are 10 and 12 points behind, respectively, and show no signs of catching up. It was a similar story in 2015-16 when the Foxes won the title by 10 points – and defending champions Chelsea finished 10th.

Leicester’s recruitment was poor in the immediate aftermath of their title win, even taking into account Wilfred Ndidi’s 2017 arrival. Islam Slimani, Ahmed Musa and Nampalys Mendy joined in 2016 for a combined £57million but flopped. Vicente Iborra, Kelechi Iheanacho and Adrien Silva – who missed the registration deadline by 14 seconds and was forced to sit on the sidelines for months – signed a year later but none made an impact, with only Iheanacho still the club and barely playing. But the arrival of James Maddison, Tielemans, Jonny Evans, Ricardo Pereira and Caglar Soyuncu have proved the club are getting it right again.

The Foxes are strong across the board. They have had 8,883 touches and have made 6,348 passes – both the fourth highest behind Manchester, Chelsea and Liverpool. The Foxes also back up their style with substance. They are the second highest scorers with 29, behind Manchester City’s 35, and have kept five clean sheets, joint top with City and Sheffield United – despite selling £80million centre-back Harry Maguire to Manchester United in the summer.

Football rumours from the media