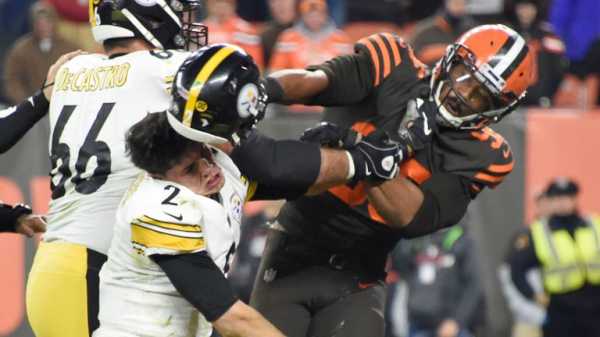 Current and former NFL players have had their say about Myles Garrett’s helmet swing at Mason Rudolph on Thursday night.

Although the Cleveland Browns salvaged their season with a 21-7 win over the Pittsburgh Steelers, the game was marred by the incident in the final seconds of the game.

Browns defensive end Garrett ripped Steelers quarterback Rudolph’s helmet off and swung it at him, striking his head before a mass brawl ensued.

Many NFL players — current and former — watching the game voiced their opinions on social media.

Garrett could be facing unprecedented action by the league after his actions in a prime time game. ESPN’s Kevin Seifert pointed out the longest suspension for an on-field incident in league history is five games, when Albert Haynesworth stomped on an opponent’s head in 2006. Garrett will be facing a lengthy ban.

The Browns and Steelers meet again in Pittsburgh on December 1.