Alex Albon lost control turning left to head up the hill into Juncao, but lost control and went onto the barriers during Practice One of the Brazilian GP.

Alex Albon set the pace for Red Bull in a wet first practice for the Brazilian GP — before crashing out after a frenetic end to the rain-affected session.

Heavy showers at Interlagos meant running was limited to open the weekend, although most of the leading drivers posted competitive laps on intermediate tyres as the track started to dry.

Albon was fastest with a 1:16.142, half a second faster than Valtteri Bottas, with Ferrari’s Sebastian Vettel and Charles Leclerc third and fourth.

With conditions improving, drivers even felt comfortable enough to head out on slick tyres — although the action halted soon after they exited the pits.

Max Verstappen first span in the Red Bull, before team-mate Albon — who comes into the weekend with a new contract for 2020 — lost control of his car and shunted into the wall near the final corner.

That crash caused a red flag, bringing an end to P1.

Red Bull, meanwhile, have a rebuild on their hands ahead of second practice at 6pm.

Lewis Hamilton, F1’s new six-time world champion, didn’t post a time in the session as Mercedes opted to save themselves and their tyres for what should be a drier rest of the weekend.

Verstappen also didn’t get a time on the board. 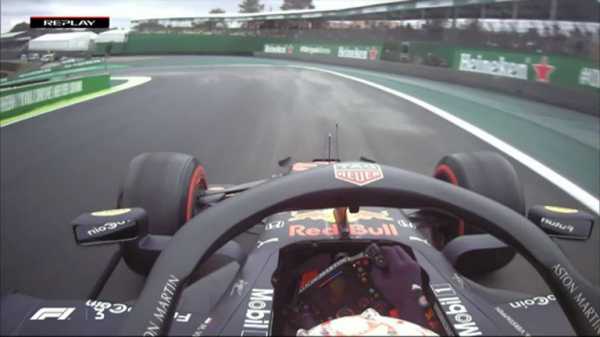 0:58 Max Verstappen went off the track at Turn 3 during first practice ahead of the Brazilian Grand Prix.

With those two off the timesheet, fifth was up for grabs and filled by Carlos Sainz who, as has been regular in recent weeks, topped the midfield.

Renault’s Nico Hulkenberg and Daniel Ricciardo were just behind, ahead of the Toro Rossos and McLaren’s Carlos Sainz.

The rain also led to a frustrating session for Nicholas Latifi, who was replacing Robert Kubica in the Williams but didn’t get any dry running.