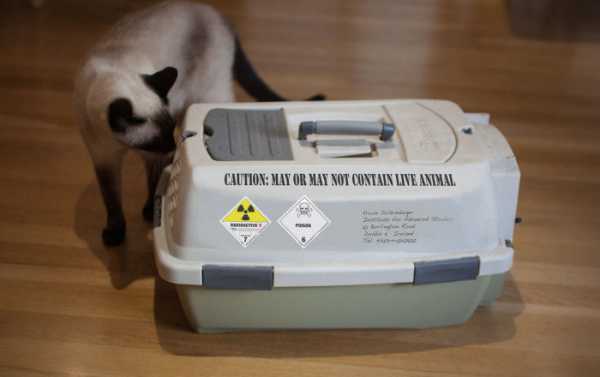 The famous feline-based thought experiment that describes the mysterious behaviour of subatomic particles might finally have a solution which doesn’t involve permanently killing the (hypothetical) animal.

The thought experiment described an imaginary cat which is simultaneously alive and dead inside a box with —  exists in a superposition of «dead» and «alive» states — just as subatomic particles exist in a superposition of many states at once. Only if one looked inside the box, the cat’s state would become permanent – either alive or dead.

However, a study published October 1 in the New Journal of Physics describes a way to potentially peek at the cat without forcing it to live or die, advancing scientists’ understanding of one of the most fundamental paradoxes in physics.

Hofmann and Kartik Patekar, who was a visiting undergraduate student at Hiroshima University at the time and is now at the Indian Institute of Technology Bombay, wondered if there was a way to look inside, and landed on a mathematical framework that separates the initial “interaction” — looking at the cat —  from the “readout” — knowing whether it’s alive or dead.

Hoffman and Patekar are able to assume that all the photons involved in the initial interaction, or peek at the cat, are captured without losing any information about the cat’s state. So before the readout, everything there is to know about the cat’s state (and about how looking at it has changed it) is still available. It’s only when we read out the information that we lose some of it.

Here’s how they described their work in terms of Schrödinger’s cat. The cat is still in the box, yet rather than looking inside to know whether the cat is alive or dead, you set up a camera outside the box that can somehow take a picture inside of it. Once the picture is taken, the camera has two kinds of information: how the cat changed as a result of the picture being taken and whether the cat is alive or dead after the interaction. None of that information has been lost yet. And depending on how you choose to «develop» the image, you retrieve one or the other piece of information.

Hofmann also provided a “coin flip” example. You can choose to either know if a coin was flipped or if it’s currently heads or tails — but you can’t know both. What’s more, if you know how a quantum system was changed, and if that change is reversible, then it’s possible to restore its initial state – i.e. “flip the coin back.”

Crucially, the choice of readout comes with a trade-off between the resolution of the measurement and its disturbance, which are exactly equal, the paper demonstrates — the more you know about the cat’s current state, the more you have irretrievably altered it.