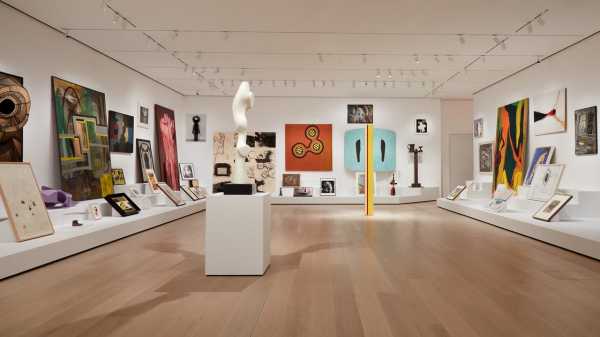 Prunella Clough, a superbly weird British modernist who died in 1999, at the age of eighty, was fond of a quote by Édouard Manet: “Painting is like throwing oneself into the sea to learn to swim.” Looking at art can be like that, too—both a crash course and a full-body experience. Visitors to the newly renovated MOMA are invited to take that kind of plunge in the show “The Shape of Shape,” installed in a small gallery on the fifth floor, filled with an exhilarating abundance of seventy-one paintings, sculptures, photographs, drawings, and prints in the museum’s collection. They were selected by the voraciously smart Amy Sillman, a superbly weird painter herself (she contributes a blood-crimson wall work, equal parts shadow and viscera), who chose the catchall concept of “shape” because it’s off the grid, rarely discussed, as opposed to related principles like color or systems. Sillman muses in her introductory wall text that shape may be “too personal, too subjective, to be considered rigorously modern.” In keeping with the rehang throughout the new building, hidebound hierarchies of modernism are reconsidered. While the show doesn’t stint on acknowledged Masters (no Manet, but there is a Matisse), the emphasis is on oddballs like Clough, whose orphic 1985 painting “Stone” is included.

“The Shape of Shape” (on view through April 20th) is the latest installment in MOMA’s thirty-year-old “Artist’s Choice” series, for which an artist is given free rein over the almost two hundred thousand objects in its holdings. (The museum’s intuitive curator Michelle Kuo tapped Sillman for this edition.) The installation proceeds in an obstreperous progression of four rows on three walls, covering more than a century, from 1890 to 2017, but eschewing chronology in favor of gut instinct and dream logic. Marquee names (Rodin, Calder, Duchamp), artist’s artists (Forrest Bess, Arthur Dove, Christina Ramberg), and the frankly obscure (the Croatian sculptor Ivan Kožarić) all become firsts among equals.

Throughout, Sillman introduces some deep cuts from the collection, including the beautiful “Dying People in the Bush”—a feverish scene of two figures in a penumbral landscape, punctuated by vivid purple and red—from 1962, by the Zimbabwean painter Thomas Mukarobgwa, who, despite early success (MOMA acquired four of his pictures in 1963), worked as a gallery attendant in Harare for most of his life. Sillman rhymes the Mukarobgwa piece with Philip Guston’s dusky oil-on-board “Head,” from 1968, whose stubbly block, rising from a mound of shoulders, could easily pass for a tombstone, and Fernand Leger’s 1925 canvas “The Mirror,” whose taut central shapes, in black and red, echo Mukarobgwa’s figures. The fragmentary composition of the Leger is reflected by a shardlike sequence hanging above it, five black-and-white aquatints, from 2014, by Jennie C. Jones; that series, in turn, connects to the painted-wood “Head of a Woman,” from 1915, a triangular whorl by the French Cubist Henri Laurens, which circles back to Guston’s blockhead. Overwhelmed yet? Just sixty-six more pieces to go. 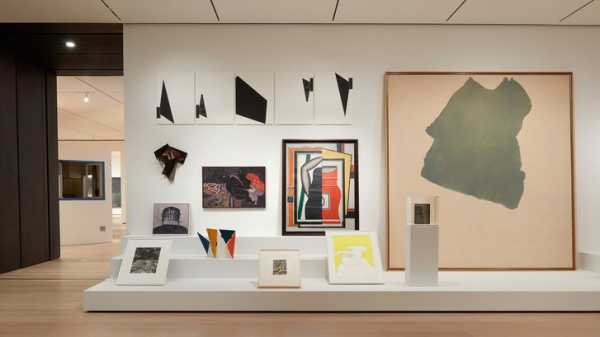 There’s no disputing that the show is a lot. When I first saw it, on a quiet morning before the museum opened, it made me too anxious to linger. I felt that the larger works—like Charline von Heyl’s nearly seven-foot-tall painting “Igitur,” a woozy push-pull of papal scarlet and dyspeptic lavender, from 2008—yearned for more breathing room. But, on subsequent visits, I’ve come to appreciate the too-muchness of it all. Sillman’s show lets visitors in on a secret: they get to feel how an artist thinks. The ethos of the new MOMA—to revise the myth of modern art as a triumphant procession of great white men and instead tell the glorious, untidy truth of a bunch of weird human beings—finds its most exciting expression in Sillman’s selections.

Above all, I admire the commitment that Sillman asks of her viewers, both mental and physical. Those who want to register the N.S.F.W. image in Marcel Duchamp’s three-and-a-half-inch-high copper-on-plaster “Female Fig Leaf,” from 1950, or get cozy with Edvard Munch’s 1908-09 lithograph of a nude woman hugging a bear, had better be willing to squat. Artists put everything on the line, after all, including their bodies: take the radical Austrian feminist Valie Export, whose 1976 photograph “Encirclement” documents her contorting herself in a city street, with the impossible aim of conforming her own shape to the architecture. Risking failure, Sillman seems to suggest throughout the show, is its own triumph.