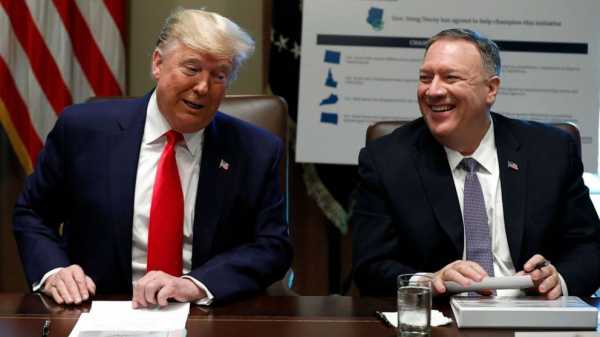 Despite his repeated denials, Secretary of State Mike Pompeo says he would run for the open Senate seat from Kansas if the Republican Party were in danger of losing, according to President Donald Trump.

Trump endorsed the plan Friday to have Pompeo, who previously served as a congressman from the state for three terms, to run if the party were close to nominating «somebody out there that couldn’t win.»

Trump said the idea was Pompeo’s himself, just one day after Pompeo’s spokesperson denied that he was planning to resign to run for the seat. 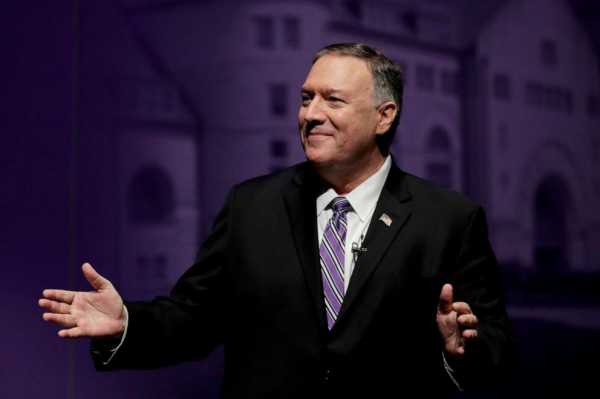 Secretary of State Mike Pompeo answers a question from an audience member after giving a speech at the London Lecture series at Kansas State University Friday, Sept. 6, 2019, in Manhattan, Kan.

«He came to me and said, ‘Look, I would rather stay where I am,’ but he loves Kansas. He loves the people of Kansas. If he thought that there was a chance of losing that seat, I think he would do that, and he would win in a landslide,» Trump told the Fox News morning program «Fox and Friends» in an extended phone interview.

Speculation has swirled around a possible Senate run, prompted again this week by a TIME Magazine report that Pompeo has started telling senior Republican leaders that he is planning to resign and run next year.

«﻿I spoke to the secretary, and he said this story is completely false. He is 100% focused on being President Trump’s Secretary of State,» State Department spokesperson Morgan Ortagus said Thursday.

But the rumors have been fueled by Pompeo’s own travel schedule, visiting the state four times this year.

That travel has prompted some strong condemnation, even in Kansas. The hometown newspaper, the Kansas City Star, released an editorial after his latest visit in late October titled, «Mike Pompeo, either quit and run for U.S. Senate in Kansas or focus on your day job.»

«You should know that Kansans are interested in the world beyond the Great Plains. And would frown on even a fellow Kansan using his government office to fund what looks increasingly like campaign travel,» the editorial board wrote. 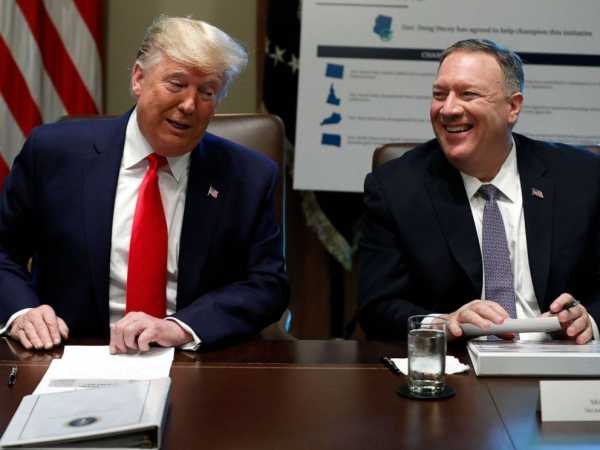 President Donald Trump and Secretary of State Mike Pompeo laugh during a Cabinet Meeting at the White House, Oct. 21, 2019.

It’s also drawn scrutiny from Congress. The top Democrat on the Senate Foreign Relations Committee, Sen. Bob Menendez, D-N.J., wrote a letter to the Office of Special Counsel, asking for an investigation into whether Pompeo’s travel has violated the Hatch Act. The law prohibits federal employees from using their official office to participate in partisan politics, and Pompeo reportedly met with his longtime benefactor Charles Koch while in Kansas in October, according to the Wall Street Journal.

In response, Pompeo dismissed Menendez’s letter as «silliness» and accused him of «left coast, elitist liberalism» for not understanding «the greatness of being in places like Wichita and places like Kansas City.» During that October visit, he also batted away local reporters’ questions about the visit by saying it was «absolutely, 100 percent» the best use of his time and arguing, «Lots of cabinet secretaries go home an awful lot more than that.»

Pompeo has repeatedly ruled out running — at one point telling NBC News in February, «It’s ruled out.»

But he’s made no secret of his political ambitions, particularly running for president. He told «The Sunflower,» the Wichita State University student newspaper, «If the opportunity presented itself where I thought that was the case, I’d certainly think about it.»

But the impeachment inquiry has backed Pompeo into a corner, with a cadre of State Department officials testifying against Trump’s and his personal lawyer Rudy Giuliani’s efforts to pressure Ukraine’s government to announce investigations to benefit him politically and to smear career ambassador Marie Yovanovitch despite her doing «nothing wrong,» according to Pompeo’s deputy.

U.S. ambassador to the European Union Gordon Sondland testified this week that Pompeo and other senior officials were «in the loop» on his and other’s efforts to push for investigations. Pompeo has refused to answer questions about it, but it further drew him into the controversy, with all 10 Democrats on the Senate Foreign Relations committee calling on him to recuse himself from all Ukraine-related matters — something Pompeo said Thursday he would not do.

Political analysts say that the Senate may be Pompeo’s only way out — facing growing anger and frustration within the department over his leadership, while seeking to minimize daylight between him and Trump and keep the president’s endorsement.

«Mike would easily win in Kansas, a great state. It’s a Trump state. He would win easily,» Trump said Friday.