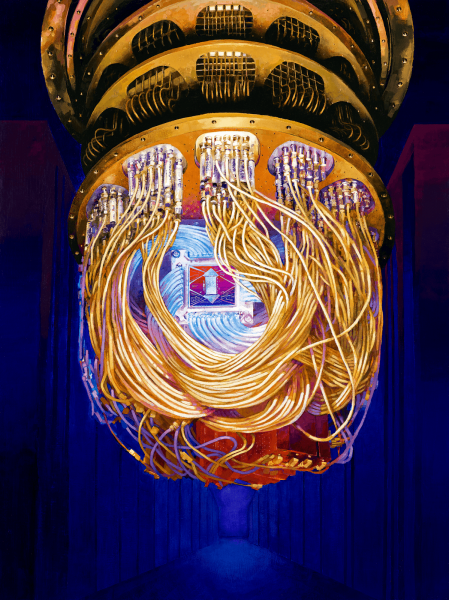 Scientists at Google on Wednesday declared, via a paper in the journal Nature, that they’d done something extraordinary. In building a quantum computer that solved an incredibly hard problem in 200 seconds — a problem the world’s fastest supercomputer would take 10,000 years to solve — they’d achieved “quantum supremacy.” That is: Google’s quantum computer did something that no conventional computer could reasonably do.

Computer scientists have seen quantum supremacy — the moment when a quantum computer could perform an action a conventional computer couldn’t — as an elusive, important milestone for their field. There are many research groups working on quantum computers and applications, but it appears Google has beaten its rivals to this milestone.

According to John Preskill, the Caltech particle physicist who coined the term “quantum supremacy,” Google’s quantum computer “is something new in the exploration of nature. These systems are doing things that are unprecedented.“

Of note: Some researchers at IBM contest the “supremacy” claim, saying that a traditional supercomputer could solve the problem in 2.5 days, not 10,000 years. Still, 200 seconds is a lot quicker than 2.5 days. If the quantum computer isn’t supreme, it’s still extremely impressive because it’s so small and so efficient. “They got one little chip in the quantum computer and the supercomputer is covering a basketball court,” Preskill says.

It sounds all very gee-whiz. And some scientists think these computers will one day lead to discoveries of new drugs and possibly whole new fields of chemistry. Others fear they’ll be used one day to crack the toughest security protocols.

But if you’ve never heard of a quantum computer or know what it does or what it’s used for, you’re not alone. So let’s break it down.

What the heck is a quantum computer?

Before we discuss what a quantum computer is, it’s helpful to think about what a traditional computer is.

Traditional computers utilize the flow of electricity and can be turned on or off at switches inside circuits. Whether a switch is on or off generates the ones and zeros that underlie all computer code. This is what Alan Turing discovered in his pioneering work: Simple rules for turning those switches on and off can be used to solve any mathematical problem. These zeros and ones are called bits, and they are the smallest bit of information a computer stores.

To recap: Traditional computers use the physics of electricity, namely the fact that its flow can be turned on and off at switches, to run everything.

Quantum computers, on the other hand, are not built upon using the flow of electricity. They rely instead on the physical properties of electrons, photons, and other tiny bits of matter that are subject to the laws of quantum mechanics.

These bits of matter can do a lot more than just be turned on and off. Actually, on and off aren’t really words that make sense in quantum physics.

This kind of tiny matter is best described in states called amplitudes (like waves, since the tiniest bits of matter can act as both particles and waves). A particle can have two different amplitudes at the same time — a state called superposition. They can also be entangled, meaning a change in one particle instantly changes another. The amplitudes of particles can also cancel one another out like opposing waves in water would. Also, the smallest particles in nature don’t really exist in a point in space but they exist as a probability of existing.

For a great video explainer on quantum mechanics, check out this video by physicist Dominic Walliman.

It’s all weird stuff that defies normal logic! Yet, there is a logic to it. Out of this chaotic mess of entanglement, superposition, and interference, our stable world arises.

Quantum mechanics are “the rules that make reality,” says Scott Aaronson, a theoretical computer scientist who studies quantum computing at the University of Texas Austin. Take an electron, he says. According to classical physics (think Newton’s laws of motion), electrons should spiral into the center of atoms, rendering them useless. “What quantum mechanics ultimately says is there are all these pathways where the electron can spiral into the nucleus, but they all cancel each other out.”

It’s hard to think about, no doubt. “It’s staggering what we’re talking about,” Aaronson says. It’s like the electron itself is a computer, sorting through all the possible paths it can take before finding the right ones. In a sense, the electron has solved the problem of its own existence.

Amazingly, what quantum computer engineers are doing is tapping into the chaotic logic of the quantum world to solve problems. Like a normal computer with its switches to control the flow of electricity, they build hardware to influence quantum states. (A part of the research into quantum computing is figuring out what the optimal hardware should be.) They’re trying to choreograph quantum interactions in a way so the wrong answers to big problems get canceled out.

Okay, I’m kinda with you. But why do scientists need to tap into the chaos of quantum mechanics to solve problems?

In a normal computer, a bit can be in two states — on or off. Zero or one. But a qubit — a.k.a. a quantum bit — can be in many states at once. That means a single qubit can contain exponentially more information than a normal bit.

“That’s a bit like having four regular computers running side by side,” Cosmos magazine explains. “If you add more bits to a regular computer, it can still only deal with one state at a time. But as you add qubits, the power of your quantum computer grows exponentially.”

What it boils down to is that a quantum computer can crunch through some enormous problems really quickly. For instance, a lot of cybersecurity depends on computers multiplying huge prime numbers. It’s really really hard for traditional computers to reverse this process, to find the prime numbers that resulted in the bigger number and crack the encryption. But quantum computers could. In a quantum computing world, we may need even stronger security protections, perhaps even those derived from quantum mechanics itself.

Scientists hope quantum computers may lead to better, quicker ways to solve optimization problems. When you have many different choices in front of you, how do you choose the ideal path? These types of questions strain traditional computers but could, potentially, be a breeze for quantum computers, which could sort through all the possible parts at once. A traditional computer has to try out each path one at a time. Though, “we’re not going to be able to run applications like that for a while because the hardware just isn’t advanced enough,” Preskill adds.

Quantum computers are hard to build, are prone to generating errors, and their components are often unstable. Right now, Preskill says, what Google has shown is a proof of concept: that quantum computers can solve problems in a way traditional computers can’t. Its machine runs 54 qubits. “But this is a tiny fraction of the one million qubits that could be needed for a general-purpose machine,” a news article at Nature states.

Quantum computers don’t really do anything practical yet. The test problem Google ran for their paper was — and this is a simplification — to see if a random number generator was truly random.

“They’re validating that their hardware is doing what they think it’s supposed to be doing,” Preskill says, “checking that with the quantum computer they can perform the computation with many fewer steps and much faster than a classical computer.”

Perhaps most of the more immediate uses would just be to use quantum computers to simulate the frenzied world of quantum mechanics and better understand it.

“We can use a quantum computer as a general simulator of nature on the microscopic scale,” Aaronson says, “and use it to predict what a protein will do, help design a drug that will bind to a receptor in the right way, and help design new chemical reactions … design better batteries. You would only need one or two successes to make this whole thing worthwhile.”