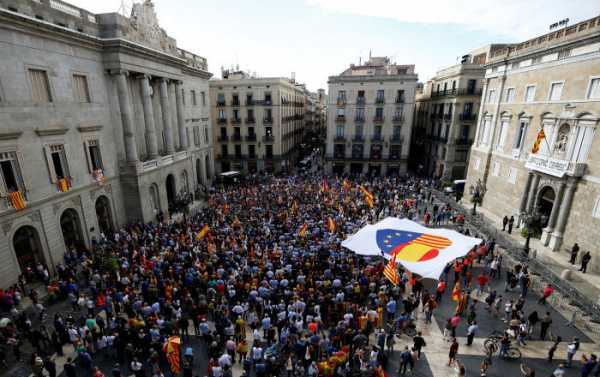 MADRID (Sputnik) — The parliament of Catalonia on Tuesday adopted the project of a resolution stipulating the right of the autonomous region to self-determination, a Sputnik correspondent reported.

The resolution cites the «intention» of the parliament to «implement in a concrete way the right to self-determination and respect the will of the Catalan people.» Of 135 lawmakers, 61 voted in favor — members of the pro-independence parties of Together for Catalonia, Popular Unity Candidacy, and Republican Left of Catalonia. The Socialists and People’s Party of Catalonia did not vote. Members of the centrist Citizens party left the chamber, while eight lawmakers from the En Comu party abstained.

The resolution was proposed by the far-left Popular Unity Candidacy parliamentary fraction.

While the adopted document has no legally binding force, the Spanish government lodged two complaints to the country’s Constitutional Court over the Catalan resolution, claiming that it violated the court’s previous rulings.

On 1 October 2017, Catalonia held a referendum to determine its sovereignty status. The voter turnout was 43 percent, of which 90 percent voted for the independence from Spain. On October 27 that year, the Catalan parliament unilaterally proclaimed independence, while Madrid deemed the referendum illegitimate and imposed direct rule in the autonomous region the very next day. The local government was dismissed and subjected to prosecution.

On 14 October this year, the Supreme Court of Spain sentenced nine pro-independence Catalan leaders to 9-13 years in prison on sedition charges and other three to fines over disobedience. Later that day, the court issued European and international arrest warrants for former Catalan President Carles Puigdemont. The rulings triggered mass protests across Catalonia that continue untill now.