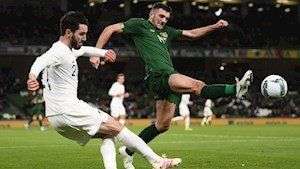 Latest: In an unusual move, Mick McCarthy has named his Ireland team more than 24 hours ahead of kick off in tomorrow night’s friendly against New Zealand at the Aviva.

As had already been flagged, Spurs starlet Troy Parrott will make his senior international debut, at just 17 becoming the third youngest to do so in Irish football history.

Also making his senior debut will be Celtic full-back Lee O’Connor after suspension ruled him out of the Irish U21s’ game against Armenia in Yerevan tomorrow.

The vastly more experienced Robbie Brady makes a welcome return to the starting line-up, with Mick McCarthy keen to see how the Burnley man fares before he picks his side for Monday night’s crucial Euro 2020 qualifier against Denmark.

Ciaran Clark is another familiar face returning to the team after a long absence, while Jack Byrne makes a quick return to the Aviva following his FAI Cup Final triumph with Shamrock Rovers.

And there is another opportunity for Sean Maguire to kick-start his Irish career after a series of injury setbacks.

Earlier: Mick McCarthy will send a much-changed Republic of Ireland side into friendly battle with unfamiliar foe New Zealand on Thursday night with one eye on Monday’s Euro 2020 showdown with Denmark.

McCarthy is unlikely to risk any of his big names with qualification at stake against the Danes and has already indicated that there will be several new faces in his team.

Here, the PA news agency takes a look at some of the talking points surrounding the game.

Just as he did with Robbie Keane back in 1998, McCarthy has handed a 17-year-old striker the chance to prove himself at senior international with Tottenham’s Troy Parrott set to make his debut against New Zealand. Parrott, however, will not be the only teenager on the pitch with 19-year-old Celtic full-back Lee O’Connor, who is suspended for the under-21s’ qualifier in Armenia, also making his debut.

If there will be youthful new faces among the Ireland ranks, there will be some familiar older ones too with Newcastle defender Ciaran Clark and Burnley midfielder Robbie Brady back in the fold. Both were key members of Martin O’Neill’s team and were included in McCarthy’s early squads, but injuries have limited their opportunities at club level in recent times. However, both are back in harness and keen to re-establish themselves.

Darren Randolph has made the Irish goalkeeper’s shirt his own in recent seasons, and there was real concern when a thigh strain forced him to miss three games for club Middlesbrough in the build-up to the international break. However, he returned at QPR last weekend and with his manager having vowed to wrap him in cotton wool ahead of Monday night’s qualifier, Bournemouth’s Mark Travers and Kieran O’Hara, currently on loan to Burton from Manchester United, will both get an opportunity to prove their worth.

Shamrock Rovers midfielder Jack Byrne made an impressive senior debut in September’s friendly victory over Bulgaria and will win a second cap and a first start against the All Whites. Byrne has returned to the SSE Airtricity League after difficult spells in England at Manchester City, Wigan and Oldham and a brief period in Scotland with Kilmarnock, and his elevation represents a significant boost for the League of Ireland.

All White on the night

Remarkably, New Zealand have not played a meaningful game for 525 days after a period of upheaval with the game’s governing body. However, new head coach and former Leeds defender Danny Hay has already set his sights on qualification for the 2022 World Cup finals in Qatar, and will hope to mould a team around experienced West Ham defender Winston Reid, who is set to return from an 18-month injury lay-off in Dublin, and Burnley striker Chris Wood.