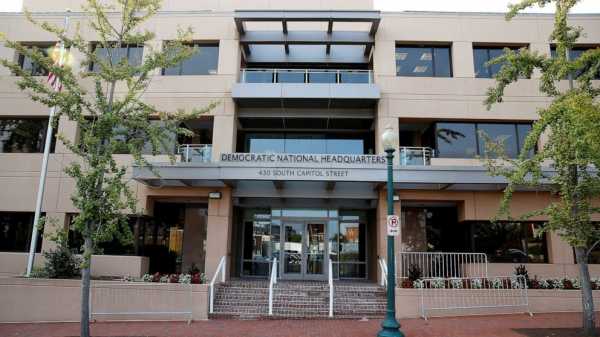 Democrats are looking to expand early investments in seven key battleground states in the lead up to the 2020 election cycle, with a six-figure investment to fund a new round of general election staff operatives, according to a Democratic Party official. The investment is part of a broad voter protection campaign — signaling their commitment to safeguarding the integrity of U.S. elections.

The new effort, part of the Democratic National Committee’s sweeping early investments targeting states that will likely define the outcome of the presidential race, coincides with the fifth Democratic debate, hosted by MSNBC and The Washington Post in Atlanta on Wednesday night at 9 p.m.

The national party is set to hire a range of directors and organizers, specifically focused on protecting voters’ rights across Arizona, Florida, Georgia, North Carolina, Michigan, Pennsylvania and Wisconsin — underscoring where next year’s crucial contests will be won and lost. The new staffers will work for the state party and will be funded by the DNC, a new approach for the committee that stresses its early priority on expanding their map since 2015. The funding is being provided through the DNC’s State Party Innovation Fund (SPIF).

«The DNC is making historic, early investments to build the general election infrastructure our eventual nominee will need to defeat [President Donald] Trump. In addition to organizers who are working to mobilize key communities, we are proud to partner with our state parties to build an on-the-ground, voter-protection infrastructure that will protect the rights of voters to participate in our democracy,» said Reyna Walters-Morgan, DNC director of Civic Engagement and Voter Protection, in a statement to ABC News. 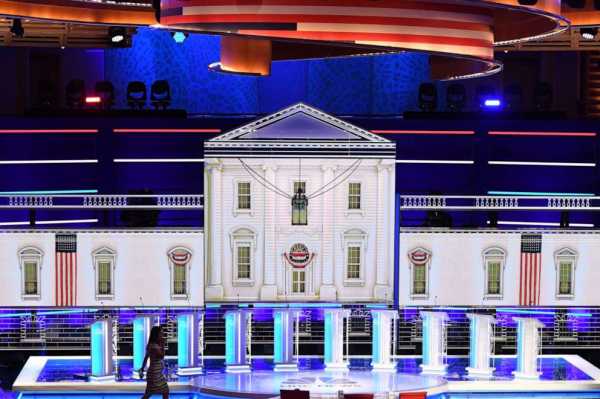 The stage is seen prior to the second Democratic primary debate of the 2020 presidential campaign season hosted by NBC News at the Adrienne Arsht Center for the Performing Arts in Miami, Florida, June 27, 2019.

The aides will also work to implement and bolster Democrats’ general election strategy a little less than a year before Election Day, by strengthening infrastructure at the local level for the eventual nominee and mobilizing key constituencies that are the bedrock of Democrats’ base.

The latest round of staff hires, which comes after the national party hired new communications and organizing staffers earlier this year to zero in on attacking Trump’s agenda on the ground, dovetails with the DNC’s increasing focus on voter protection, particularly as the site of the next debate lies in Georgia, where 2018 gubernatorial candidate Stacey Abrams ascended to Democratic stardom after her near-win against Republican Brian Kemp.

Abrams, who lost by 1.5 percentage points, refused to concede to Kemp, accusing the former secretary of state throughout the contentious campaign of voter suppression as he held his position overseeing elections while he ran for the state’s top executive job. Kemp has vehemently denied doing anything improper.

(MORE: Democrats target suburban voters in key battlegrounds ahead of 2020)

But despite her defeat, Abrams, and national Democrats, are proactively challenging voter suppression and election reform at the state and local level, as the GOP-controlled Senate stalls on taking up significant measures to address the issue in Washington, most recently last month, despite top experts sounding the alarm on election security.

Senate Majority Leader Mitch McConnell approved an additional $250 million to help states with election security gearing up for 2020, but Democrats argue it is not nearly enough.

Shortly after the 2018 contest, Abrams launched Fair Fight 2020, an organization aimed at defending voting rights, and continues to be one of the most vocal advocates for fair elections. 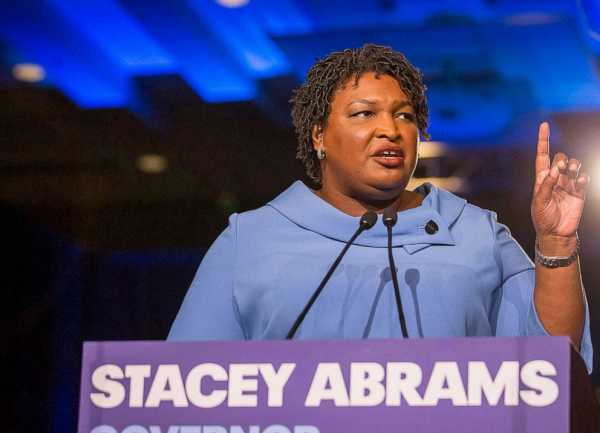 In this Nov. 7, 2018, file photo, Georgia gubernatorial candidate Stacey Abrams speaks to her supporters during her election night watch party in Atlanta.

«I was raised to believe that the right to vote is our most fundamental right and that you protect it, but more importantly, that you work for it,» Abrams told ABC’s «This Week» in August. «For me, this is very personal.»

For its part, the DNC’s most recent battleground investments are part of a far-reaching campaign to build up voter protection infrastructures through education, advocacy and organizing resources, and by backing four lawsuits related to ballot order in Arizona, Texas, Georgia and Florida. Last week, Democrats secured a major victory when a Florida court overturned the state’s law requiring that ballots list Republicans first, which Democrats argued implicitly gave the GOP candidates an unfair advantage.

The committee has also increased its monthly investment in every state party by an average of 33% versus this point in 2015 — leading up to the 2016 campaign.

Democrats will also host two events in Atlanta this week, specifically revolving around the issue of voter protection, including a roundtable with Abrams on combating voter suppression tactics on Tuesday, and the launch of the DNC’s Civic Engagement and Voter Protection Summit with Chair Tom Perez on Wednesday, to outline their strategy on voting rights alongside community members, which includes a key role for Civil Rights groups in securing the vote.

But Democrats’ battle next year to make inroads in some of these key swing states and expand blue territory won’t solely be centered around the top of the ticket. The state that’s home to the upcoming presidential debate is trending less and less red in part due to the underlying «shifting demographics» in and around Georgia’s urban centers, according to Alan Abramowitz, a professor of political science at Emory University in Atlanta.

Abramowitz told ABC News that Democratic gains in Georgia’s down-ballot races in 2018 were partly a result of «this clear sort of Democratic trend in the suburbs around Atlanta, which is similar to what we’ve seen in a number of other states in some of the larger metropolitan areas.»

«The Abrams race certainly suggests that the state could be in play — the electoral votes could be in play and the Senate seats that are up in 2020, now two of them, could very well be competitive,» he said, noting that the presidential contest will «definitely» play a role in the down-ballot seats up for grabs in 2020. «If the margin is more than a point or two, then I think it’s pretty likely that the party that wins the White House … will also win both of those Senate races.»

Democrats’ strategy to win the majority in the U.S. Senate runs in part through the Peach State in 2020, with two potentially competitive Senate elections slated for next year, including one open seat after the resignation of longtime GOP Sen. Johnny Isakson due to health concerns.

Despite Abrams passing on the opportunity to take on GOP Sen. David Perdue in next year’s regular election, a field of at least four challengers has already formed in her absence. 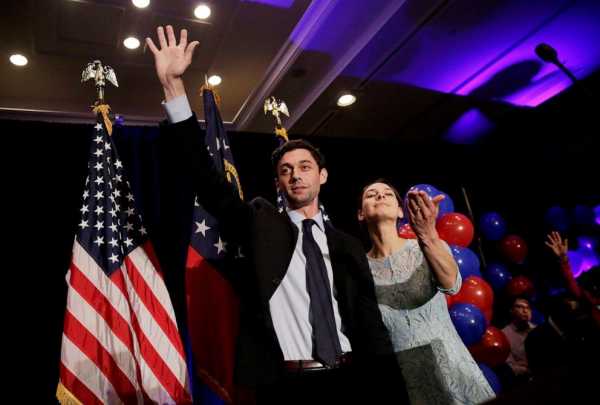 In this June 20, 2017 file photo, Democratic candidate for 6th congressional district Jon Ossoff, left, concedes to Republican Karen Handel while joined by his fiancee Alisha Kramer at his election night party in Atlanta.

Among the Democrats seeking to oust the former business executive and Trump ally are Sarah Riggs Amico, who ran alongside Abrams as her lieutenant governor, and Jon Ossoff, a proven fundraiser during his failed 2017 bid for the 6th Congressional District, now held by Democrat Lucy McBath.

One Democratic source told ABC News in late August that Perdue is in a «weak position» and said that the «floor is rising» in Georgia.

As for the Senate seat opened by Isakson’s resignation, Kemp will appoint a replacement that will serve until the next statewide election, which will take place in November 2020, according to state law.

Several notable Republicans have thrown their hat in the ring to be considered for his replacement, including former Health and Human Services Secretary Tom Price, who resigned from the Trump administration in September 2017 after it was revealed he had repeatedly chartered private planes for government travel, and GOP Congressman Doug Collins, one of Trump’s key allies on Capitol Hill as the ranking member of the House Judiciary Committee. The deadline to apply to be considered was on Monday.

Both races are currently rated as «likely Republican,» according to the Cook Political Report.

But Democrats remain optimistic about their chances next year.

«Democrats are taking nothing for granted and laying the groundwork to win the White House and secure victories at every level of the ballot in 2020,» Walters-Morgan said.